Eddie Hall responds to Joe Rogan’s criticisms of his striking, and addresses whether or not he and Hafthor Bjornsson could be friends again 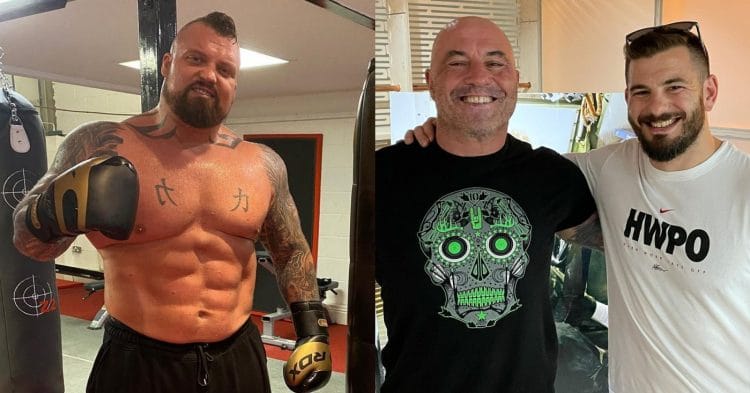 Joe Rogan recently offered some critiques of the striking technique that Eddie Hall has shown so far. Now the Beast responds, and also answers some questions about this relationship with Hafthor Bjornsson.

For the last several months, Hall has been training vigorously for his September boxing match against rival and fellow strongman Hafthor Bjornsson. Throughout that time, he has gotten into tremendous physical condition, undergoing a pretty radical weight loss, while also working to hone his technique.

However this boxing match was recently the topic discussion for Joe Rogan and Mat Fraser, when the pair did a podcast together. Speaking on the subject, they brought up footage of Eddie hitting mitts and sparring, as well as Thor’s exhibition match, and Joe did not hold back on his criticisms for either man’s skills thus far.

“That’s not good. Right away we’re seeing that we have a real problem. Yeah, this is terrible. He’s very rudimentary, but also you see that his body is very stiff,” Rogan said, while watching Hall training.

“Looking at him sparring there, he’s just not moving so good… This is super stiff. He’s throwing these punches with his arms. These are arm punches, almost like he shouldn’t be hitting things.”

Eddie Hall caught wind of these comments, and decided to respond. While doing a Q&A for his YouTube channel, the retired strongman was asked about what Joe Rogan said, and he opted to give his thoughts.

For the most part, Eddie does not take this personally, understanding that Joe is only looking at a small portion of the picture. That said, he plans on proving Joe wrong when he steps into the ring this September.

“I love Joe Rogan, I absolutely do love Joe Rogan. I watch a lot of his stuff… Look man, people can speculate, they can make assumptions, they can guess, they can do whatever they want, but I’m knocking Thor out. There’s no doubt in my mind,” Hall said.

“So, people can say whatever they want. I take no offense to Joe Rogans comments. He’s an experienced guy, he knows what he’s talking about, but he doesn’t know the full picture. You look at a few clips, you can’t make assumptions from that.

“It doesn’t bother me in the slightest, it doesn’t put me off,” Hall added. “I hope it gives Thor more confidence because he needs it. He’s in deep trouble. And I’d still love to go on the Joe Rogan show and tell him a story for everyone to hear. Honestly, no offense taken by Joe Rogan and just move on and let (my hands) do the talking.”

Can Eddie Hall and Hafthor Bjornsson Be Friends Again?

That was another question posed to Eddie Hall from one of his fans, as the pair used to be quite close. This changed when they had a falling out over Hafthor accusing Eddie of essentially cheating him out of a World’s Strongest Man victory, which started the beef that has ultimately led to this fight.

For Eddie, there is not really any hope of the two having any real reconciliation, even after the fight. While he may be willing to shake Thor’s hand, he feels that the damage is done, and the trust between them has been completely broken.

“That’s irreparable. Three, four years now with a big cloud over my World’s Strongest Man win, and what’s that cost me in terms of my career, him putting that horrible black cloud over my win, and he just doesn’t care,” Hall said.

“I’ve still not had an apology off him, he still believes he was robbed. There’s no denying that, he keeps putting the stories out and keeps saying it on podcasts… At the end of the day, if he had solid evidence for something, bring it up. He’s full of s—.

“Thor is not my friend. He was, and I can safely say even with an apology, I could shake his hand and accept an apology but I don’t want to go out and break bread with this man, that’s for sure.”

Over the course of his career, Eddie Hall has had many highs and lows. However someone wanted to know what his biggest regret is, throughout his strongman career.

For Eddie, it comes down to his performance at the 2014 World Deadlift Championships, where he dropped the bar on a world record deadlift, nullifying the record. While that was a massive disappointment, he says that this ultimately led to him quitting his other job to pursue full-time strongman training.

“My biggest regret in strongman in 2014’s World Deadlift Champs, and I picked up the world record alongside Benni Magnusson, 461 kilos, and I completed the lift, the referee gave me the down signal, and I let go of the bar,” Hall said.

“(I) disallowed the lift, lost ten grand in prize money, really upset the balance in my work life, career at the time, and I remember coming home that weekend and I said to the wife ‘I quit strongman, I’ve had enough. I’m sick of spending all my money competing, training, eating, to go and lose money.’

“I lost money that weekend, a lot of money. So that weekend it was a hard thing to take, struggling for cash at the time, working well over 80 hours a week, training 20-plus hours a week, I was killing myself,” Hall continued.

“That made me make the decision to quit strongman, but it was my wife that sat me down and said ‘What are you on about? You just pulled a world record deadlift for the whole world to see. You just proved to yourself that you can go on and do great things, you can win the World’s Strongest Man.’

“It was that weekend that I dropped the deadlift, that I quit my job and decided to become a pro strongman. So probably one of the biggest regrets in my strongman career was dropping that deadlift and disallowing that lift, but I believe that it put the fire in my belly, it made me train harder, and that is probably one of the main reasons I quit my job and I went pro and I eventually became the World’s Strongest Man.”

Friends or not, it is going to be exciting to see Hafthor Bjornsson and Eddie Hall settle their beef in the boxing ring this fall. Both men have been working hard, and time will tell who has the better skills, come fight time.