The greatest CrossFit athlete of all time recently sat down with Joe Rogan to discuss a variety of topics including the shady activity of CrossFit director Dave Castro. . 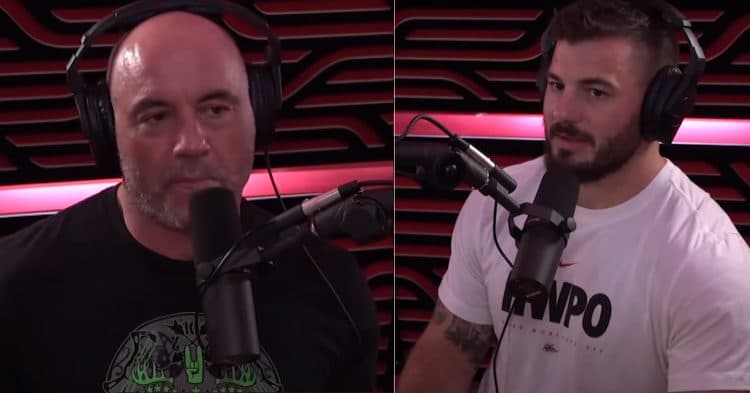 We listened in at one point in the show where Rogan asked if he felt different trying to win the title for a second time.

Fraser explained that his first win just felt like a big relief because he finished second two years prior and was worried he’d never win the Games after coming so close.

He also had to deal with all the noise.

“It’s just hearing other people talking shit of like last year first was a fluke and he can’t do it again“.

Rogan made a very good point when he said “how could anybody say it’s a fluke to win the CrossFit games. That is literally the dumbest f-ing thing when you look at the volume of work you guys have to do.”

Fraser then talked about how even after he won the Games four straight times, three of which he broke the record for biggest margin of victory, the Games director Dave Castro put out an article saying the champ’s performance was slipping.

“I saw this come out and I was like how am I slipping like I haven’t lost an in-competition since like 2015. If it was an in-person competition I’ve won it for like the last five years.”

Because Castro programs the Games, Fraser explained that it was a conflict of interest and that he also put out something saying like “I just finished programming the 2020 Games and it’s not good for Mat.”

It’s quite clear that Dave wanted to throw Mat off his game but that didn’t work out too well.

“I think he just doesn’t like me. Everyone just jumps when he says jump and I wasn’t that guy.”

The conversation then moved in a slightly different direction with Rogan asking what the deal was with CrossFit founder Greg Glassman and why he doesn’t physically resemble someone who exercises or keeps in shape.

Rogan was absolutely baffled because of this and Fraser was also surprised when he first met Glassman in person.

“I remember seeing him for the first time and I was like that’s the guy?”

Fraser also went on to explain that the few times he did meet Glassman, the latter didn’t say more than a few words to him even after he won the Games. He told of a situation where they bumped into each other at Starbuck’s and all Glassman said was “hi”.

Fraser also mentioned how Glassman admitted to hating the Games because he didn’t like what it was all about.

For those who aren’t aware, Glassman resigned last year after making a “joke” about the George Floyd situation on Twitter. Castro took over as CEO until Eric Roza purchased CrossFit and assumed the role of CEO.

But not only did Glassman’s comments cause a big outrage in the CrossFit community and outside of it too; more details and evidence surfaced relating to other inappropriate behavior from the former CEO.

They also talked about this situation during the podcast.

But back to Castro’s article about Fraser’s performance slipping as the topic did circle back around, Mat said that he mentally pinned that comment on the wall, and was like “alright I’m going to show you slipping motherf–ker“.

“I don’t want to give him the gratification knowing that I’m thinking about him“.

It was just a weird situation for Mat but he understands that Castro doesn’t like him.

Fraser also talked about being treated a certain way when he came into the sport like he was a nobody especially because he didn’t jump when Castro said jump. Then when he reached some success in the sport, Castro tried to be nice to him but Mat wasn’t having it.  There was also some other shady stuff that went on like when he was completely skipped over for an event when he should have been competing.

But all that’s in the past and Mat Fraser’s record fifth CrossFit Games must have felt even sweeter because of those circumstances.

UFC Color commentator and popular podcaster Joe Rogan has found himself in the middle of controversy due to alleged racist...