Strongman Eddie Hall will not discount the 600kg deadlift out of the realm of possibility. 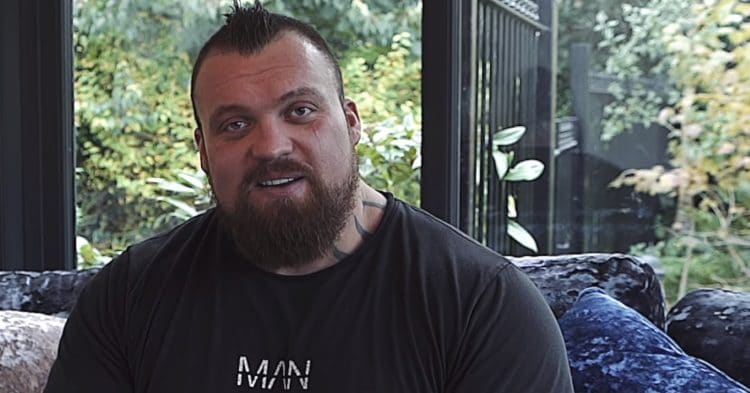 It’s not every day we get one of the strongest men in the world to answer our questions online. The World’s Strongest Man (2017) Eddie Hall recently hold a Q&A session for his fans where he answers a wide range of questions. Answering questions ranging from Strongman to powerlifting, the Strongman-turned boxer delved into the possibility of deadlifting a colossal 600kg in his latest video.

Eddie Hall and Hafþór Bjornsson have been rivals for quite some, whether it be the world deadlift record or just a potential boxing fight, these two Strongmen are determined to see who is the superior athlete. In 2016, Hall set the deadlift record of 500kg. However, his rival, Bjornsson took it one step further and attained the world record 4-years later in 2020 after lifting 501kg on an elephant bar (supervised by a referee in his Iceland gym).

Eddie Hall spoke on his YouTube channel and answered various questions from deadlifting to talking about his potential boxing fight with Bjornsson.

Do you think you would of had more success doing powerlifting than the World’s Strongest Man?

“I’ve always said this about powerlifting. Powerlifting is a fantastic baseline, I think, to get into other sports. I think in terms of accolades and recognition and making a career, I think powerlifting is probably one of the bottom sports you can possibly do.” Eddie Hall explained.

What is your plan after the fight?

So I’d say for the last, I’d say since I was 19, when I set the goal of becoming the world’s strongest man I have not had a day off.”

“Nice and easy, I’m sitting at about 157kg, I’m sort of weighing between 155kg-160kg, so anywhere from 350lbs-370lbs is where I’m sitting. I’m very comfortable at this weight, I’m able to do the runs, the swimming, and the boxing. I do feel like I can fight at this weight. Eddie Hall said.

Fitness is holding on, my speed is there, my agility is there, and the old saying goes, if it’s not broke don’t fix it.”

Do you think a 600kg deadlift is possible?

“Wow. Well, you know what, I mean people said the 500kg deadlift was impossible. Bear in mind, the world record is 37kg off the world record, from when people were saying that. This is 100kg on top of that.

Who knows. Hall reiterated. An Absolute freak may be born, another Andre The Giant may be born, 10-foot tall with a 1000lbs of bodyweight and it’ll just come and lift it with one arm. You just never know. Never put a limit on what the human body can do.”

What’s the best and worst things about boxing from a Strongman perspective?

“The best thing is, I think, given the time to build the body up is probably one of the best things you can do for boxing. Because I’ve never ever ever heard of once, a boxer say, I wish I was weaker for that fight.” Hall concluded.

“With boxing, it’s a completely different new game and I needed some guidance, I needed to know what to eat so I sort the advice of Nathan Payton. The diet now is pretty much it’s quite strict you know. I get one or two cheat meals a week and when I say cheat meals I mean not the whole day. I mean they’ll get like breakfast or an evening meal and that’s one cheat meal.

It’s all organic so every single piece of food or drink I put into my mouth is organic or 90%. It’s all wholesome foods so like you know rice, chicken, steak, lots of vegetables, fish. So you know it’s a pretty healthy diet. It’s a hell of a lot of sort of salmon in there and a lot of gluten-free products, so cutting out all the ingredients that sort of don’t agree with your body and it’s all timed.”

During his strongman, competitive days hall weighed around 400lbs. After his retirement, he transformed his physique and now sits around 350lbs.

Following Hall’s withdrawal from the Bjornsson exhibition due to bicep injury, hafthor remained busy and fought Devon Larratt–a professional arm wrestler and won the fight by TKO. Bjornsson has been involved in three exhibition boxing fights and the other two bouts resulted in a draw. The boxing match between Bjornsson and Hall is expected to take place in 2022.

When asked about the possibility of the monumental 600kg deadlift, Hall believes at the moment, that feat will take some time to accomplish. The Strongman admitted that it wasn’t impossible, but underlined the gravity of the challenge during his Q & A.