Despite the fan’s excitement, Iron Biby will not be taking part in the 2022 Giants Live Strongman Classic. 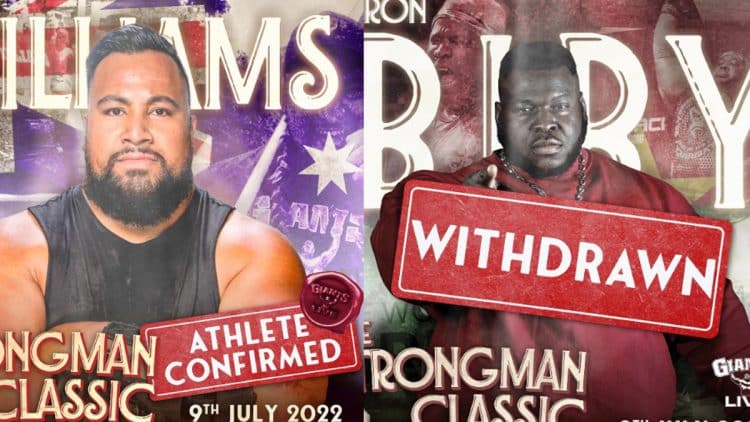 The 2022 Giants Live Strongman Classic has lost yet another competitor, despite being scheduled to take place in just two days from now, which is July 9th. Adam Bishop withdrew yesterday and was replaced with Gavin Bilton. Another sad development occurred today, as Cheick “Iron Biby” Sanou also withdrew.

The official Instagram page of Giants Live shared the news of Iron Biby’s withdrawal from the competition. They did not reveal the exact reason but did mention that it has something to do with traveling, so at least Iron Biby did not suffer any injuries.

Giants Live has already named Eddie Williams as Iron Biby’s replacement for the 2022 Giants Live Strongman Classic. He will be representing Australia, so a long trip awaits him just days before the start of the competition.

Unfortunately due to situations out of his control it is impossible for him to travel at this time 😢.”

Many Strongman fans were excited to watch Iron Biby compete in a full competition, since he usually only performs in a single event. This all intensified after Biby shared a 400-kilogram (881.8-pound) stiff bar deadlift double on his Instagram. However, Eddie Williams will definitely provide entertainment to everybody watching.

Eddie Williams has participated in eight international and national Strongman competitions throughout his five-year career. He also competed in the 2019 World’s Strongest Man contest and came fifth in his group, which consisted of Tom Stoltman, Martins Licis, Smaukstelis, and Shivlyakov.

The “Singing Strongman” Eddie Williams is not only an athlete, but he also has an amazing voice. Although Eddie probably is not the favorite for this competition, no one knows what he is capable of doing at the current time. The 2022 Giants Live Strongman Classic events will be, Dumbbell Medley, The Pillars of Hercules, Farmer’s Carry, Axle Deadlift, and Castle Stones. It is possible that some of these will suit Eddie quite well.

Iron Biby was definitely in contention to win the 2022 Giants Live Strongman Classic. So, his withdrawal will be a benefiting factor for the other competitors. As Iron Biby did not sustain an injury, he is likely to receive another opportunity in the future. As a result, it will only be a matter of time before we find out what he decides to do.

Jay Cutler ‘Separated Himself from Society’, Went to a ‘Dark Place’ to ‘Maintain Top-Two in The World for 12 Years’