The four-time Mr. Olympia and Women's Physique Olympia champion pushed each other during a recent training session to build a full chest and sharper triceps. 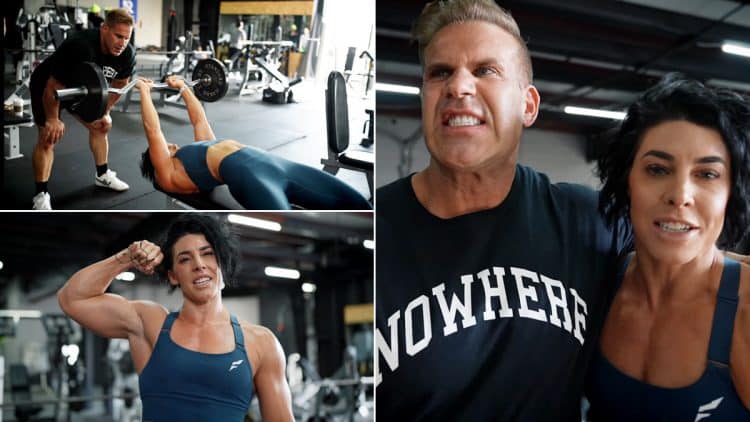 Female bodybuilder Dana Linn Bailey and former Mr. Olympia Jay Cutler reached the top of the sport in each of their respective divisions. In a recent collaboration video, Bailey and Cutler joined forces for a demanding series of chest and triceps workouts.

Dana Lynn Bailey proved she had the talent to hang with the best during her time competing in the Women’s Physique class. She won the prestigious Women’s Physique Olympia title in 2013. After a long career filled with highs, Bailey returned to 2014 Olympia where she earned second place, behind champion Juliana Malacarne. While she came incredibly close to earning the Arnold Classic title in 2015, she ultimately landed in second place once again.

Having retired from the sport, Dana’s focus has been on growing her impressive YouTube channel. With over 500,000 subscribers on the platform and another two million Instagram followers, her name holds a lot of weight in the female bodybuilding community.

Bailey joined decorated legend and four-time Mr. Olympia Jay Cutler for a workout. Cutler is one of the most successful Men’s Open competitors to emerge from the IFBB Pro League. He won the Olympia title in the Open four times throughout his tenure. Despite hanging up his posing trunks, Cutler remains an exemplary ambassador for the sport, and always brings incredible insight when discussing bodybuilding’s finer details.

Below you can find a list of the exercises utilized in their video:

For their first exercise, Cutler explained that he likes to lift around 70% of his body weight when using the incline machine for chest presses.

“We did about eight reps, did a drop set for the last set.” Linn Bailey said.

Bailey stuck to around eight reps, while Cutler opted for his usual 12 reps.

During the next movement, Cutler explained that even if he can go beyond 12 reps, he chooses not to. A general rule he held in high regard throughout his career was always firing off 12 reps.

“Alright, so this is a little different of a fly machine here. We have this in my gym in Vegas. Now, everything I do is 12 reps. You notice, even if I can do more reps, I’m still doing 12. I stopped short. That’s how I’ve always done it throughout my whole career, is 12 reps on everything.” Cutler told Dana.

Conversely, Bailey likes to make each exercise as difficult as possible to maximize her gains.

“Definitely not what I do. I make everything as difficult as possible.” Dana told Jay.

Before attending an Expo event, Bailey decided to continue with another exercise.

“We’re going to do one more chest exercise. Maybe hit a couple tris. Then, we gotta go the Expo.” Bailey shared.

Bailey offered a pro tip while practicing cable pushdowns. She said to keep the pinky fingers at the top of the handle in order to get a better contraction.

“I really like to keep my pinky at the top and put the pinkies together to really get that squeeze.” Bailey said.

Cutler used dumbbells a lot during his career and stressed that machines like these didn’t exist back when he was training for Olympia. He added that cable movements aren’t always finishing movements.

“I was limited at the gyms I trained at. Today, we got to use a couple new pieces. Remember, 15 years ago, a lot of this stuff didn’t exist. Just like my diet, I keep everything really basic. So, if I had to improvise, it was basically what I did at home and I didn’t miss even though I wouldn’t travel for Olympia but when you know when we talk about isolation movements people think cable exercises are strictly for a finishing movement, which I don’t believe is the case.” Jay Cutler explained.

For their last exercise, Bailey shared that she prefers EZ Bar skullcrushers because it feels better on the wrists. She opted to perform this exercise with a close-grip and pushed to failure.

“Starting off with 10-12 skull crushers EZ bar. I like the EZ bar because it feels a lot better on your wrist. It’s more ergonomically correct. I’m throwing in some close-grip presses to kind of finish it out. Those I don’t really count, I just go until I can’t go anymore. Just failure.” Bailey said.

Dana recently joined fellow female bodybuilder Kristen Nun for an intense arm workout, showcasing that she still has plenty of the qualities that saw her earn bodybuilding’s most prestigious title in Women’s Physique.

Despite taking a step away from pro competitions, Bailey hasn’t slowed down in the slightest. However, as of late, she’s spent the majority of her time working on her business and other entrepreneurial efforts. Even in retirement, she follows a strict diet to keep her physique in the best shape possible.

Cutler has also remained active in retirement. The credentialed pro recently shared a grueling workout and explained that he now looks at training like meditation. The Massachusetts native is an open book and doesn’t mind sharing details about his steroid cycle with fans. The four-time Mr. Olympia didn’t mince words and shared that he took as much as he possibly could during the beginning stages of his career.

Bailey and Cutler are enjoying the fruits of their labor in retirement, but it hasn’t deterred them from pushing the pace anytime training is on the schedule. Judging by their latest workout routine, Cutler and Bailey still treat training sessions as they did during their active years competing at shows.