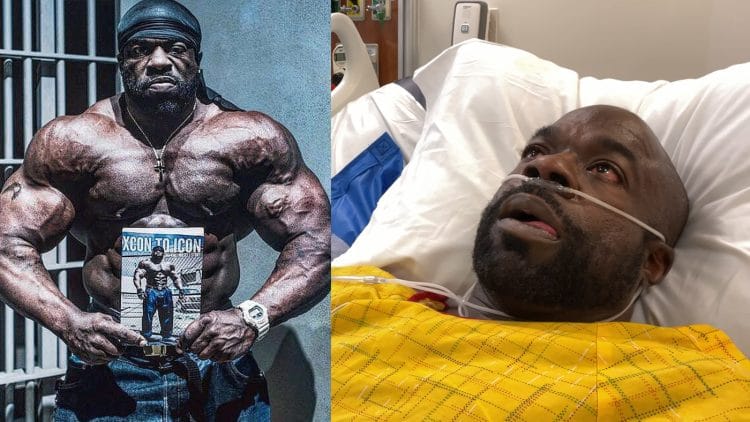 Chuck Kirkendall aka Kali Muscle was recently hospitalized after suffering a heart attack and fortunately lived to tell of his scary experience. Kali is a well-known name in the fitness industry not only for his hulkish physique but entertaining persona. His prison to success story is inspirational.

The 46-year-old bodybuilder, entertainer,  fitness influencer, and actor gained a lot of recognition for his workout, nutrition, and comedy-related YouTube videos that’s expanded into a variety of more content. His channel has grown to over 2.49 million subscribers. Kali has also seen a lot of acting success as well.

You may remember the very large bodybuilder directing traffic in the Geico commercial, well that was none other than big Kali Muscle. Not to mention, he was featured in commercials for Snickers, Taco Bell, Honda, and others as well.

His jacked physique has also landed him roles in films such as Wonder Woman (2011), The Dog Who Saved The Holidays, and some TV series parts as well.

Ignoring The Signs and Edema

Things really took off for the muscle man but in the process, he admittedly neglected what was most important, his health. In the video, Kali says he’s suffered from edema (swelling due to trapped fluids in the body’s tissues) in his feet and ankles which is a sign of heart health issues.

He said that people would warn him about it but he didn’t pay much attention as he didn’t think anything was wrong.

“Being a tough ass, you ignore people saying that like man I ain’t got no heart problems or nothing like that.”

He explained going to the dentist last week, then the day after he took some meds, took a nap, and woke up with chest pains.

“I’ve had heartburn before in my life, it felt like heartburn.”

Mistaken For Heartburn and Emergency Surgery

After taking some stuff to hopefully alleviate what he thought was heartburn but to no avail, his girlfriend took him to the hospital and he needed emergency surgery. It turns out the left artery that supplies blood to the left side of the heart was clogged 100%.

Kali said he didn’t remember his mother or father having a history of heart issues.

However, he had migraines and swelling in his feet during his younger years and took a lot of diuretics for bodybuilding of which he also mentioned.

“I’ve always been concerned so I don’t want to say it’s a wake-up call.”

Kali also had a physical a few years back and was told about something related to his heart health of which he also ignored. The feet swelling was a problem he knew about for many years.

Interestingly, Kali says he wasn’t too scared for the procedure as he’s was “woke” and therefore not concerned that he’d die.

But he especially now understands how important it is to monitor your health.

“Health is everything man.”

He should be out in a day or so which is good news and the doctor says everything else looks good.

“Make sure you guys take care of your health. That’s what  I’ve been talking to you about anyway. And you know, GOD is using me as an example. ‘Cause as we just saw, you know, RIP SHAWN RHODEN.”

Kali mentioned 2018 Mr. Olympia champion Shawn Rhoden who passed away this weekend due to what is believed to have been a heart attack according to many sources. It was incredibly shocking to the bodybuilding community.

Related: Flex Lewis Pays Tribute To Late Shawn Rhoden: “I Feel This Life Could of Been Saved”

Classic Physique and 212 competitor George Peterson also died last month preparing for the 2021 Olympia of which the cause was not confirmed. There’s been increasing concerns about the many recent deaths in the sport prior to the passing of these two legends, and having two more in two months is very alarming.

After Peterson’s death, Arnold Schwarzenegger and legendary Sammir Bannout expressed their concerns about the safety of bodybuilders.

Kali could not hold back the tears at this point.

“Some people don’t get a second chance man I got my twins and I got to live man.”

This was no doubt a terrifying experience for Kali Muscle and we wish him a speedy recovery and the best health moving forward.

Flex Lewis Pays Tribute To Late Shawn Rhoden: “I Feel This Life Could of Been Saved”