Life and accomplishments of Rafael Brandao 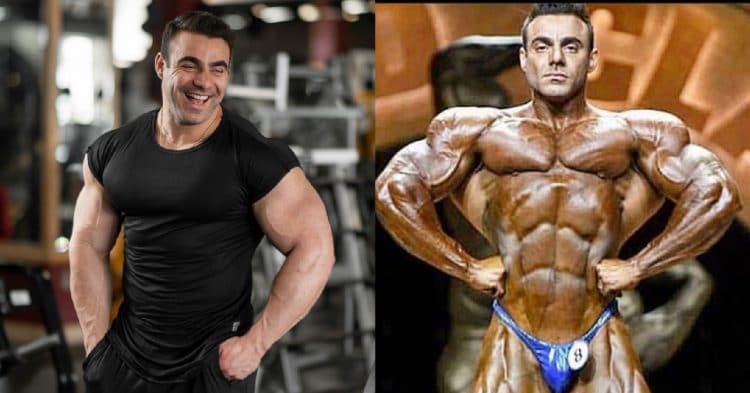 Rafael Brandao is an IFBB professional Open division bodybuilder from Brazil. Brandao is known for having an incredibly aesthetic physique that isn’t quite as massive as many of the other elite competitors. However, he has impressive genetics and a true passion for the sport of bodybuilding. This is his complete profile, biography, training regimen, diet plan, and more.

He was involved in many different sports during his youth such as soccer, basketball, and volleyball. He was just a very active kid who was always looking for excitement and an adrenaline rush.

Brandao was admittedly a very skinny teenager that was known as the “skinny kid”. However, one of his friends growing up introduced him to weight training, and he absolutely fell in love with it possibly much sooner than he expected too.

“Right at that moment, I noticed it was an individual sport. It wasn’t like soccer, volleyball, or basketball where you rely on a team to produce results.”

But his intention wasn’t to be a professional athlete at first; all he wanted to do was improve his physique so that he could put on size and not be seen as skinny anymore. He didn’t have much knowledge but trained anyway and learned along the way like a lot of people do. But he did make a lot of progress rather quickly which was the most satisfying feeling because he knew that what he was doing in the gym was working.

It also helped that he naturally ate a lot which only helped him to gain much needed muscle and strength as a skinny youth. Seeing his body change before his eyes really fueled his desire to continue training and see results. It became an obsession for young Rafael Brandao.

“I haven’t taken a month off since I was 14. I always kept on training non-stop and loving it even more“

But it wasn’t until 18 years old that he started to focus on the sport of bodybuilding. Brandao knew that if he was going to be competing, he needed to step up his knowledge of nutrition and training to build a physique that was good enough to step on stage.

Little did he know, nearly a decade later he’d be a famous bodybuilder competing against the very best in the world.

Brandao described his success in his first competition at 20 years old as one of the easiest for him because he was very determined, although he didn’t have much money or support. He spent hours training and improving himself and apparently had a great eye for what he needed to work on and focus on if he was going to be competitive.

Sure he eventually got a coach to help him make improvements but he never forgets where he started.

In 2016, Brandao won a competition both in the junior and senior categories that really propelled his career and made him popular especially in the Brazilian bodybuilding circuit.

That year he won his Pro card and subsequently placed 8th in his debut at the 2017 San Marino Pro. He took 6th in his very next competition and then placed third at the IFBB California State competition.

His most recent competition was the 2020 European Pro where he came in third place, and subsequently qualified for the 2020 Mr. Olympia, of which he is planning to bring his best package ever with the help of Flex Lewis.

Being so young, Brandao hasn’t had the opportunity to compete as long as many of the veterans of the sport so his resume is currently a work in progress.

Rafael Brandao trains with very heavy weight. But he’s acknowledged that he wouldn’t be able to if not for the years he spent developing body-consciousness; also referred to as mind/muscle connection. This is important because it ensures that he’s not just moving heavy weight but maximally contracting each muscle under the load which is an essential component of muscular development. It’s also good for ensuring proper form is used while preventing injuries.

Anyone can lift heavy weights but if this becomes a habit while using improper or unsafe technique, it’s pointless, especially if the goal is to build your best physique. Not to mention, there’s a good chances that joints are taking an unnecessary beating. He has the right idea when it comes to not only maximizing muscle stimulation but longevity as well.

Brandao had the opportunity to train with 7x 212 division Mr. Olympia champion Flex Lewis at his gym (The Dragon’s Lair) in Florida, and it made a massive difference in his development and knowledge. He’s been able to make amazing progress and in a shorter period of time as a result.

Related: Flex Lewis Out Of 2020 Mr. Olympia Due To Injury

We’ve provided a few of his workouts below.

We also provided a video of his back training session below.

Brandao also makes sure to throw in some cardio by running on the treadmill or walking.

“You have to overcome yourself, you have to do it better than you did yesterday.”

Brandao likes to cook his own food especially during a contest prep; he says it’s like therapy. But he also believes in creating sort of a bond or relationship with food, explaining that it helps an athlete to be more consistent with their diet.

Brandao has to eat a lot, especially in the form of carbohydrates because his metabolism is so high compared to most bodybuilders. But even his low-carb days consist of a lot of carbs at 400g per day which would be a lot of athletes’ high-carb days.

He works with his coach to ensure that he maintains a good balance of nutrition, especially leading up to a competition because the body can change from day to day.

“The diet plays the biggest part of the athlete’s achievements.”

Some foods that he eats include oatmeal w/ protein powder and berries, eggs, turkey patties w/ rice, and cookies. He also likes to eat out where he’ll have a sandwich with fries.

Rafael Brandao is a true inspiration, going from a skinny teenager to a recognizable name in professional bodybuilding. He still has a long way to go but is still very young and is one of the most determined athletes, even if he wasn’t blessed with the natural size of the many mass monsters in the Open division. He has fans world wide who are hoping for big things from him and he certainly has the right mindset to compete with the best.

The 2020 Olympia will be a true test for him though but training with the 7x 212 Mr. Olympia champion is definitely going to be of benefit to him. Bodybuilding is his true passion and we know he’ll give it his absolute best.