Despite the odd look to the workout routine, Mike O'Hearn is getting a good pump in with bodybuilding great, Frank Zane. 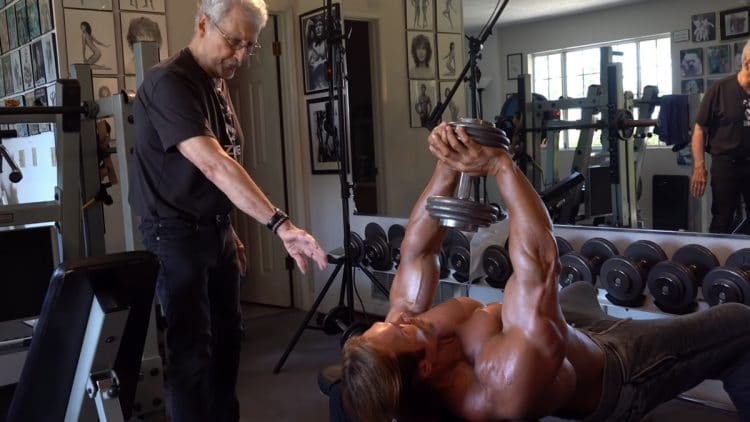 During his time competing as a prime bodybuilder, there were few athletes worldwide that could match the natural physique of O’Hearn. His longevity is downright inspiring. At 52-years-old he remains a sage voice in the community of bodybuilders and is still spreading knowledge about the sport he loves.

Mike O’Hearn won the Mr. Universe title while competing and has also been featured on the front of countless magazines. The avid competitor had it in his mind at an early age that he wanted to be a mix of Bruce Lee and Arnold Schwarzenegger. Given his incredible natural physique, the younger generation of competitors always looks to O’Hearn as his longevity is incredibly rare.

Meanwhile, Frank Zane is a legend of the sport and managed to defeat Arnold Schwarzenegger in 1968. Zane secured the Mr. America title and the Mr. Universe title in the process of defeating the bodybuilding icon. What made Zane special as a bodybuilder was his ability to maintain a muscular physique with excellent conditioning. Similar to Hearn, Zane has a knack for sharing some of his bodybuilding knowledge too.

In the last several years, social media has become a pivotal tool in helping share different techniques and exercises. O’Hearn believes that if he were to share a workout like the one below (without explanation), people on social media would quickly highlight the negatives about the exercise before the positive aspects.

“So, I gotta ask, I gotta ask, because I know they are going to say this. You’re healthy, you’re almost 80, and an exercise like that if it’s performed today, you know what they would say? And I get it all the time. Ooh! You do that once, you’re going to hurt yourself. ” O’Hearn said.

Given the prevalence of social media, O’Hearn suggests that the technique Zane is advocating for would likely cause a stir nowadays. Since the form Zane is demonstrating appears less traditional, proper guidance is needed to avoid injury. The former Mr. Olympia champ believes that if a bodybuilder or athlete understands how to utilize his lifting advice correctly, it can produce effective results.

“Maybe they would, but that’s not me. So who cares anyway you know? I never was concerned with what people say. When I was in the gym, I never even talked to people. I just go in there and train.” Zane responded.

After practicing Zane’s techniques, O’Hearn explains that he appreciates the old-school mentality of the three-time Mr. Olympia winner. Following a minor tweak to the exercise, O’Hearn mentions that this workout, in particular, is more of a stretch than an ‘exaggeration of technique’.

“You’ve got an old-school mentality that I just love. Because I feel like that it’s around the ones I came up with and everything. It’s like ‘yeah, great response it’ll hurt you it won’t hurt me’ it’ll enhance me. It was a minor change but I loved it better than what I do. It was more of a stretch than an over-exaggeration of technique.” Mike O’Hearn said.

Since the form of Frank Zane’s technique is less traditional, many are adamant that it could potentially cause injury. However, Zane, believes that if a bodybuilder or athlete understands how to utilize his lifting advice correctly, it can produce effective results.

Despite getting older, O’Hearn’s conditioning looks to be on point during his time training with bodybuilding icon Frank Zane. After getting a good pump in, O’Hearn believes Zane’s old-school techniques will only enhance his overall physique.