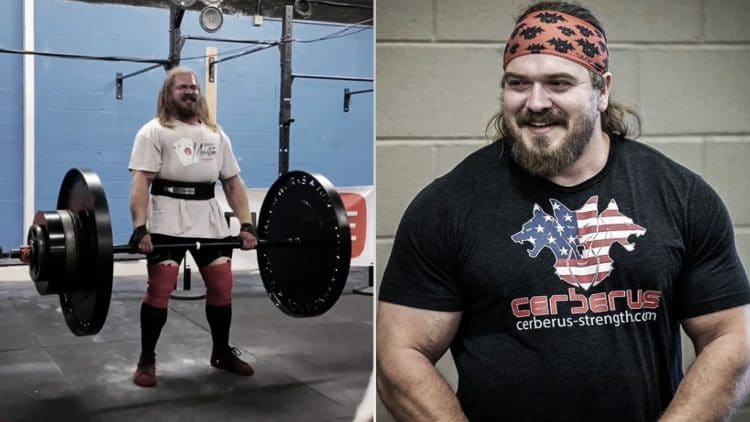 Deadlift hitch, the step where the person rests the bar on his quads after it passes above the knees, is allowed in Strongman competition. However, Pena completed the lift without it. Courtesy to Gabriel Pena’s Instagram account, you can watch the lift here:

‘I FINALLY HAVE MY OWN WORLD RECORD!!!

Although Pena completed each step of the deadlift from the starting to position to lockout with a fairly clean technique, the lifter’s grind was evident from his shaky legs. Continuing to push through the lifter’s grind can potentially lead to severe injuries. But in Gabriel Pena came out on the other side unscathed and the reward was every bit worth the effort.

Gabriel Pena dedicated the record-breaking lift to his fellow competitors and the son of his friend and teammate who passed away recently.

‘This Deadlift was for you Ricky @rd_strongman_36 . It was a pleasure lifting along with your boy today, and all the other athletes who came out in your honor. You’d be damn proud. Rest in power brother.’ Gabriel Pena wrote.

Gabriel Pena and the 500-plus kg club

With his recent accomplishment, Gabriel Pena became the first Strongman to execute a 500kg axle deadlift. The axle bar has a much larger diameter than the regular barbell. Therefore, it requires higher grip strength and makes lifting with it more difficult. However, the weight plates used in Pena’s lift were large enough in diameter for it to qualify as a partial/silver-dollar deadlift.

Gabriel Pena’s record-breaking lift in the competition is achieved after several heavy lifts in the gym. In June 2021, Gabriel Pena deadlifted 408.2kg (900lbs) triple using socks, lifting belt, wrist wraps, shin guard, and lifting straps. Before that, Gabriel Pena lifted 456kg (1005lbs) with a trap bar for five reps in March 2021 and completed a 481kg (1005lbs) partial deadlift using an axle bar in January 2021. Most notable of Gabriel Pena’s 500-plus kg partial deadlifts came eight days after he was hospitalized due to heart complications following WSM 2020 when he lifted 520 kg (1145lbs) off 18-in blocks.

Gabriel Pena was an alternate at the 2021 WSM contest. However, his strong showing proved that he is more than ready to challenge the likes of Tom Stoltman. How do you think he does in the 2022 WSM competition?