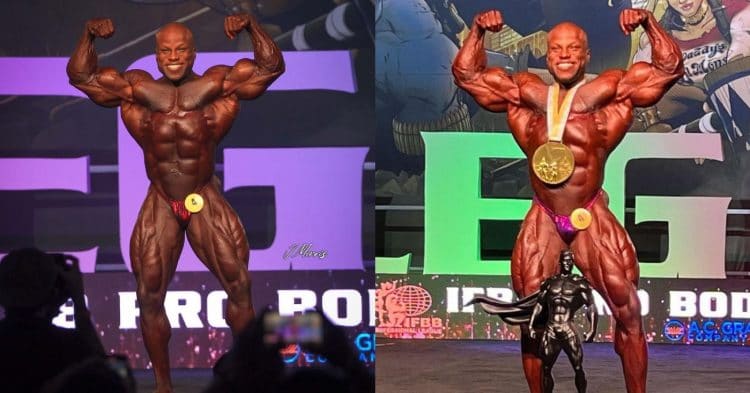 Former 212 Olympia champion Shaun Clarida made his Open Bodybuilding debut over the weekend, winning the 2021 Legion Sports Fest. Shortly after this victory, he has shared how much this moment meant for him.

Clarida came into the 2021 Olympia with a ton of hype, having won the title the year prior, and earning comparisons to the likes of Ronnie Coleman, being called a Giant Killer for winning while being undersized. Unfortunately he was unable to repeat that success, losing a close decision from the judges to Derek Lunsford.

Fans were shocked to hear that Shaun was rebounding from the Olympia by dipping his toes into the waters of Open Bodybuilding, just two weeks later at the 2021 Legion Sports Fest. Then he defied the odds and won the contest, now being qualified for the 2022 Olympia in both the Open and 212 Divisions, and following this performance, Clarida took to his Instagram to react to his win, saying that he is not officially a Giant Killer.

“The day after placing 2nd at the Olympia two weeks ago, I made the decision to compete here at the Legion Pro, making my open pro debut. As I’ve mentioned, this was always a goal for me to step on an open stage, challenge myself and ultimately have fun. However, I treated this like any other show and prepared to win and solidify myself as a true GIANT KILLER and one of the best bodybuilders in the world.

Many assumed I was going to play the size game but that’s not my game. Conditioning, proportions, symmetry and having the overall total package is what’s gotten me to where I am today and what got me the win here tonight. I was 174lbs (4lbs lighter than the Olympia),” Clarida continued.

“I have to thank god, my family, amazing girlfriend Rosangela, my coaches Matt Jansen & John Meadows (Miss you coach), my close friends, my sponsors, the IFBB Pro League, the Manion’s, the judges and ALL my amazing supporters around the world for the love and support! Truly I am blessed and grateful for you all!

It was absolutely incredible to see Shaun Clarida make this turnaround and win his debut in the Open division. While he has said that this was not going to be a longtime thing, it does make one wonder if he will decide to compete for the Mr. Olympia title after being so successful.