Hadi Choopan Squats Some Heavy Weight While Prepping For 2021 Olympia 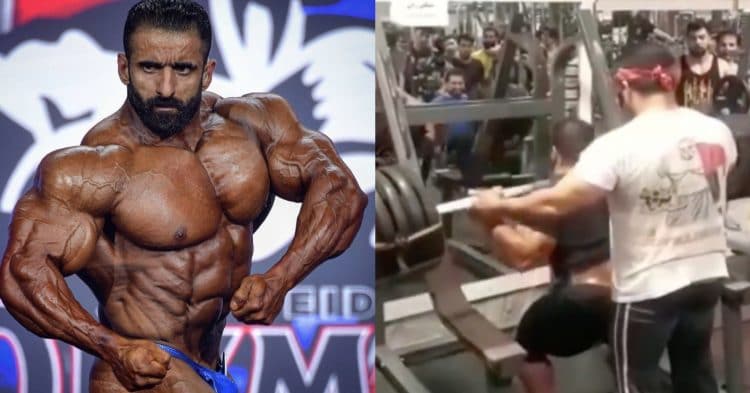 It was not an easy road for Hadi Choopan to compete at the 2020 Mr. Olympia. It seems that he is getting an early jump on prep for the 2021 version of the contest, and he is off to a solid start.

Fans of Choopan will point to how incredibly well rounded his physique is, as a reason why he should be far more successful than he is. Although those same people will also note his struggles to get a U.S. Visa as reasons why he has not reached those heights.

Take last year’s Olympia for example. We recently learned from Hadi’s coach, Hany Rambod, the full extent of the struggles the Iranian had to get into the country. Not just that, but also how difficult it was for him to maintain his physique for the stage.

Nevertheless he made it to the contest, and Hadi Choopan left Orlando, Florida as the fourth best bodybuilder in the world. Although it is worth noting that a lot of people felt that he deserved to place higher than that.

Now “The Persian Wolf” is working on closing the gap between he and the rest of the Men’s Open Division. He posted a video of one of his recent training session to Instagram, and it sees him hitting some ridiculously heavy squats in the gym.

“How many kilos, how many reps?” Hadi wrote in Persian, before adding in English:

The real workout starts when you want to”

Now of course, Hadi does not reveal exactly how much weight he is taking for a ride here, but you can look at the plates and take a decent guess. One thing that is for sure, is that it was not light weight.

Over the last few weeks, Choopan has been putting in a lot of work to boost his legs. It is not just with traditional squats either, as he has been seen doing some crazy stuff to bring up his lower extremities.

That being said, Hadi is known for being well rounded with a pretty complete physique, and that does not come from just working legs. Here he is just a few days earlier putting in some upper body work, too.

Of course, the biggest battle that Hadi Choopan will have to face is to get into the United States. If he can figure out how to make things work out better in this regard, he has the potential to make a big impact in 2021.

At the Olympia Finals, the judges scored the Iranian in second place, just behind Big Ramy. It was his prejudging scores that landed him in fourth, so if he can show up at his best both nights, he will certainly be a contender for the title.