Hadi Choopan gets paraded around by fans after returning to Iran following his fourth place score at the 2020 Mr. Olympia 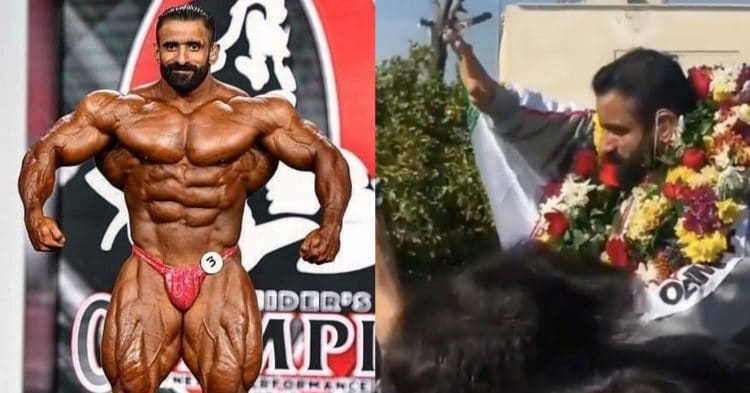 Heading into the 2020 Mr. Olympia, Hadi Choopan was already an iconic athlete in his home country of Iran. This was proven to be true after he competed in Orlando, Florida from December 17-20th, when he made it back home to full fanfare.

Competing at the Olympia this year was not an easy task to accomplish for Choopan. As always, the biggest struggle he faced was securing a U.S. Visa to compete at the show, but with just a few days to spare, he arrived in the States and was ready to compete. By the end of the weekend, he was standing in a somewhat controversial fourth place position, with many thinking that he should have even beaten seven-time Mr. Olympia Phil Heath to place third instead. He looked incredible on stage, especially during the finals, and he was easily one of the most conditioned athletes on the stage.

As impressed as the fans were with the performance of Hadi Choopan, that was nothing compared to how the people in his homeland of Iran felt about it. This was put on display in full, when Hadi arrived back in the country after the contest. As seen in the video that his coach, Mahdi Parsafar posted to Instagram, when he made it home, he was greeted by a swarm of fans who were cheering for him, and carrying him around.

This was almost as much of a hero’s welcome as the winner of the 2020 Mr. Olympia, Big Ramy received upon his own arrival. Choopan was so clearly proud to represent his country in this way, and they were obviously happy to have him as a representative.

The joy on his face and in his voice when he addressed his fans did an excellent job of conveying what this moment meant for him, regardless of what language you speak.

It was a solid showing from Hadi Choopan this year, despite the fact that he landed in a lower place than what he scored last year. The fact of the matter is that he showed some of the improvements that fans were hoping to see from him, but he still has room to grow and improve.

It is going to be interesting to see how he looks next year, and hopefully he is going to be able to get past the recurring issues of his Visa issues and put more focus on his package onstage, to continue on his path of improvement.