Life and Accomplishments of Shanique Grant 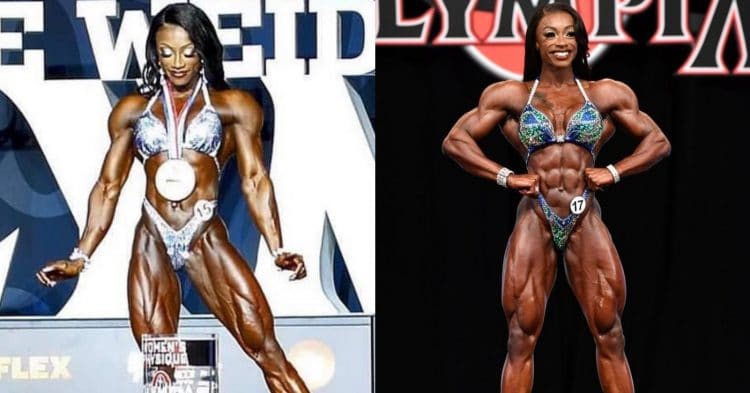 Most people are still trying to figure their lives out at 24 years old, but by that point Shanique Grant was already the best Women’s Physique bodybuilder in the world.

This is her life story, biography, training, diet and nutrition, and more.

Born and raised in Chicago, Illinois, Shanique Grant was always an athletic child. She participated in track and field during her schooldays, and kept a lean physique from doing so.

However things were not exactly easy for her growing up. She dealt with some serious bullying growing up that left her feeling isolated and, at times depressed.

To cope with this type of treatment, Grant turned to partying. She spent most of her free time at parties going crazy, and eventually hit rock bottom when her antics landed her in the hospital and nearly led to kidney failure.

It was at this point, that Shanique realized that she needed to make a change. So after reevaluating her life choices, she returned to her love for fitness, and started hitting the gym again.

Due to her natural athleticism, it was not long before Shanique Grant developed the type of physique that was worthy of taking to the stage. Being inspired by the likes of Phil Heath and Dallas McCarver, she turned to bodybuilding.

She entered her first bodybuilding show at 19, winning the Figure Division of the 2014 East Coast Championships. It was clear to her at this point, that bodybuilding was the right choice, and she started putting all her focus into training.

The second time that Grant took to the stage, she earned second at the 2014 NPC National Championships. Despite not winning this contest, she was awarded her Pro Card, only four months into her competitive career.

Shanique wasted no time making her pro debut, landing in a respectable fifth place. Nevertheless she was continuing to improve and learn best practices, so she looked better with each appearance on stage.

Things really began picking up for Shanique Grant in 2016, when she chose to make the move to the Women’s Physique division. She found success immediately, winning the New York Pro.

With this win, Shanique was expected to compete at the 2016 Olympia, making her debut. Yet a short time before the event, she was jumped and stabbed in the arm, forcing her out of the contest.

She returned in 2017 though, again winning the New York Pro, and continuing to hone her craft. Then, after winning the 2018 Women’s Physique International, she was set to make her debut on the biggest stage.

Competing in the 2018 Women’s Physique Olympia, Grant shocked everyone by scoring an incredible win. It was clear that she was going to be a force to be reckoned with moving forward.

She followed up this showing, with an even more impressive performance at the following Olympia. Now she had two straight titles under her belt, and things seemed to be better than ever.

Things looked to be heading in the direction of another Shanique Grant victory at the 2020 Olympia. However in a surprising turn of events, she actually came in second place, shocking the fans that were watching.

Following the event, Shanique made the unexpected announcement that she was retiring from bodybuilding. With her being just 25 years old, it was expected that her best days may still be ahead of her.

However Grant decided that she wanted to put a focus into building a family and enjoying life. Honestly that is a decision that anybody is able to respect, even if it disappoints the fans of her athletic career.

As far as cardio is concerned, Shanique tends to enjoy doing fasted cardio in the morning. She also enjoys doing tennis as a way to keep her heart pumping and fat low.

Here are a few workouts that Shanique Grant likes to utilize.

As far as her diet is concerned, Shanique Grant puts a focus on lean proteins, healthy fats and complex carbohydrates. She tends to average around 350-500 grams of protein per day.

Some of Shanique’s favorite foods include:

While she does have days that see her consuming more calories, Grant usually eats clean all year. This helps to keep her at the top of his athletic game, and with a lean and trimmed physique.

The career of Shanique Grant is a complicated one to evaluate. It got that way after she made the shocking decision to end her competitive career at such an early age.

There is no denying that she is an inspirational athlete and an elite Women’s Physique competitor. However it is hard not to wonder what else she could have offered with a longer career.

That being said, Grant is not going to be far from the fitness world, with her budding career as an online fitness coach. Through this role, she will continue to help others, while living a happy and healthy life for herself.