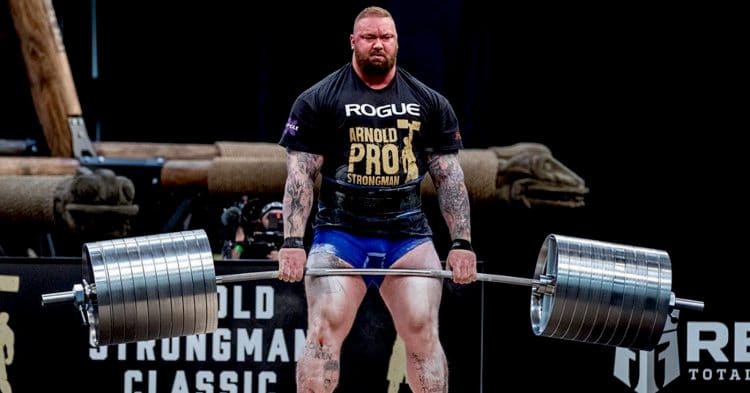 Four-time World’s Strongest Man champion Brian Shaw and 2018 Strongest Man champion Hafthor ‘Thor’ Bjornsson recently got together via technology for a Q&A session. Shaw did the question asking (on his channel) while Thor was shown on a screen. So they, of course, touched on some personal topics including the fact that Bjornsson is having a baby boy soon.

And it’s also hard to avoid talking about current issues so that was also part of the conversation. But there was a lot of talk about training and competition as well. Bjornsson said that his training is going as planned which is good news, especially with his upcoming world record 501kg/1105lb deadlift attempt.

Shaw asked him how he’s feeling leading up to this lift as there are a lot of factors that go into preparing for something like this as Shaw explained.

“Honestly you know, I feel great. I don’t have any injuries striking me right now. As a Strongman, you usually have something bothering you. I’m one of those guys that never really mentions any issues. I’m a big believer in being positive even though some people might think I’m not.”

Bjornsson has a good group of people around him and explained that he has improved as a person each and every year. So mentally and physically, it would seem that he’s very prepared for May 2.

But he’s confident that he’ll accomplish the feat due to his years of being in the sport and knowing what he’s capable of. Then regarding a fan question about Bjornsson’s beef with fellow Strongman Eddie Hall, the former explained that it just fuels rather than dragging him down.

If you haven’t kept up, Hall did not agree with Bjornsson attempting the deadlift world record outside of competition although it’ll be an official record attempt via World’s Ultimate Strongman. Hall holds the current deadlift world record deadlift of 500kg. So you could imagine there’d be some opposition there.

But Hall wasn’t the only one who was opposed. However, it won’t stop Bjornsson from moving forward and he isn’t letting Hall get under his skin. “I’m doing this for myself, that’s number one, it doesn’t drag me down it fuels me.”

Brian Shaw believes that’s the right way to think about it and he approaches opposition similarly as he explained.

Then the question of whether Hafthor Bjornsson plans to deadlift 520kg/1146lbs on May 2.

“So I basically started using Twitch about a month ago. When this difficult situation happened, I decided to buy myself a new computer. When I was younger I played a lot of games. But then I just stopped. Because of this situation in the world, I’m spending much more time at home, eating my meals, sleeping, training. So I have more spare now time now, so I started using Twitch.”

But Bjornsson said he’s going to pull 501kg before he attempts 520kg… “I’m extremely confident in m ability to pull 501kg, and I honestly believe I can pull 520kg.”

Thor tried to convince Brian Shaw to sign up on Twitch and support him too because the faster he gets to 200,000 followers, the sooner he’ll try 520kg. And he’s dead serious about setting the bar higher with 520kg too, of which he made very clear.

We’ve only provided the discussion details regarding Hafthor Bjornsson’s plans for the deadlift due to the video being rather long. But Brian Shaw had a lot of interesting questions, even asked by fans including ones that pit him against Thor. So, we recommend watching the entire video.

Watch the full Q&A below…