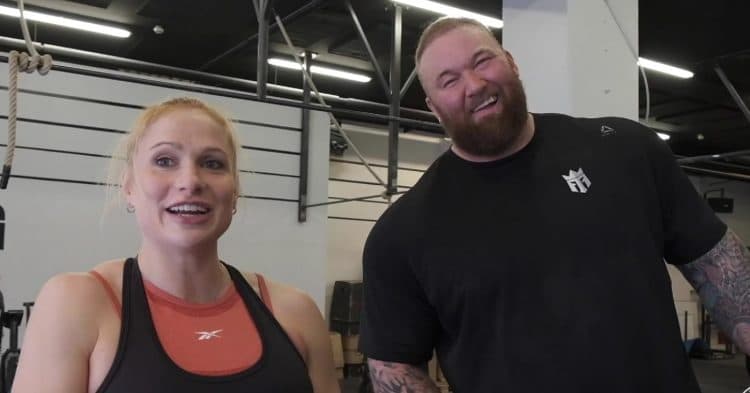 As a World’s Strongest Man winner, it is expected that Hafthor Bjornsson is able to handle some pretty intense workouts. However he got pushed to his limits when training with CrossFit Games winner Annie Thorisdottir.

Now that his world record setting 501kg deadlift has been accomplished, Thor has hit sights set on his next goal: boxing Eddie Hall. The strongman has been working hard on his preparation for the contest, even though it is still about a year away. This work has paid off too, as he has already had some serious weight loss from the training he has been doing.

Now Hafthor Bjornsson has decided to take a different approach to his training. A recent video to his YouTube channel depicts him doing some intense work alongside CrossFit athlete and former Fittest Woman on Earth Annie Thorisdottir. This workout gave him nearly all he could handle too.

To be fair, Annie is several months pregnant and can not fully do the workouts alongside Bjornsson. However she gives it her best shot, as they go over the different circuits they will be doing. Typically for CrossFit routines, they are putting a focus on high intensity rounds, working the entire body. This is the three circuits they completed:

Round One (2 minutes AMRAP)

These circuits are to be completed for as many rounds as possible during each time limit. In between the rounds, Bjornsson and Thorisdottir take 90 second breaks. Although Thor has the advantage in the strength-based exercises, it is clear that overall Annie had the better of him throughout the workout.

At first, Hafthor Bjornsson is doing well, keeping up fairly easily. He looked absolutely massive compared to the equipment he was using, as it is not common to see someone of his stature doing this type of exercise. He started breathing heavy around the second round of exercises, but still preserved and finished the workout. Although he says he was pretty close to giving up at certain points.

At the end of the video, Annie Thorisdottir and Hafthor Bjornsson joke and laugh about the improvements he has made since the first time they trained together. He has been putting an emphasis on his cardio lately to prepare to box. That work seems to be paying dividends here, but he does still have a lot to go.