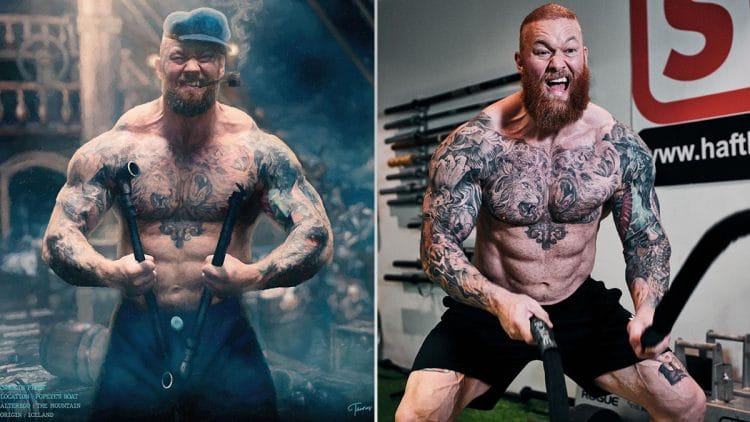 Hafthor Bjornsson shares some insights into his boxing training 24 days out of the scheduled boxing match against Eddie Hall. Bjornsson and Hall have routinely kept the fight fans updated with their boxing training, diet, and lifestyle since transitioning to boxing. However, Thor took an extended break from YouTube to stay focused on training. Recently, Hafthor Bjornsson shared a training video on his channel to give insights into the last few days of his preparation to settle the beef against Eddie Hall.

Hafthor Bjornsson has traveled to the USA, UAE as well as Scotland over the past year to add new wrinkles to his game. He is currently training in his home country Iceland and introduced his teammate and former professional boxer Billy. He is helping Thor prepare for the fight and will accompany the retired strongman in Dubai for the fight week.

The Mountain is training under Coach Willie Nelson for the fight. Nelson gave a quick update about the training and said:

“The training’s going really well, exceptionally well. The improvements are going to be there for everybody to see come March 19th. I’m really looking forward to everybody seeing the improvements in a first class performance against Eddie Hall.

Continuing further in the video, Hafthor Bjornsson went through the typical day of training. Thor started with technique training that consisted of light sparring with Billy. The primary focus of the session was to slip and dodge opponents’ punches with movement. The 34-year-old revealed that he is sparring three to four times a week and focusing on technique in those sessions.

Bjornsson then went on to perform cardio, movement, and conditioning drills. Following the workout, Thor stated that he is a little fatigued with all these months of training and said:

“Something that people might not realize is that I’m a bit fatigued right now. I’ve done a lot of sparring and a lot of hard sessions in the last few weeks. I definitely feel the fatigue in my legs, my hamstrings, my lats. I wake up every morning with inflammation in my arms and everywhere. Luckily my knees are quite healthy.”

However, Bjornsson clarified that his body is healthy otherwise and he is in the best shape of his life.

Hafthor Bjornsson and Eddie Hall were originally scheduled to fight in September 2021. However, a torn bicep forced Hall out of the fight. Bjornsson ended up fighting arm-wrestling ace Devon Larratt instead and finished the fight via a first-round knockout. Hall and Bjornsson have traded jabs on social media and got the fans hyped. They will settle their beef on March 19th, 2022 in Dubai. Both men have transitioned to boxing in a systematic manner and learned the craft with utmost sincerity. It will be interesting to see who gets their hand raised on March 19th.

Courtesy of Hafthor Bjronsson’s YouTube channel, you can watch the full video here: