The wait is finally over, Thor and Eddie Hall will meet in the ring in just over a month. 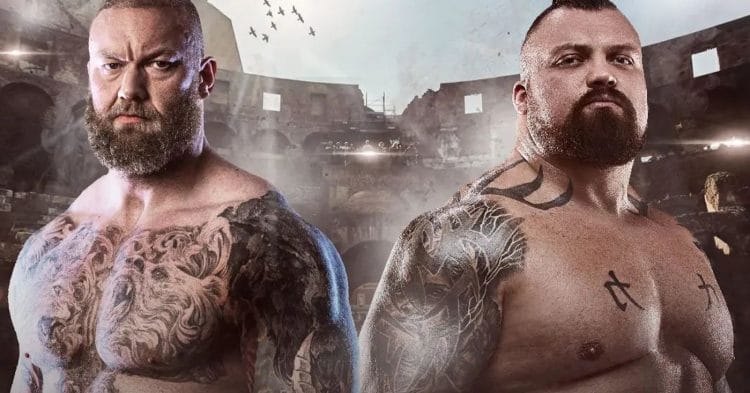 There has been plenty of speculation about when and where the two Strongmen will finally meet, and fans now have their answers. The boxing match between Hafthor Björnsson and Eddie Hall goes down on March 19, inside the Dubai Duty-Free Tennis stadium in the United Arab Emirates.

Linked to a battle in the “sweet science’ for quite some time, the pair of Strongmen have worked tirelessly to prepare their bodies for the new sport. Thor and Hall are the only two men to deadlift 500kg or more (Thor having set the 501kg deadlift world record), so the fight has become more about pride than anything. Despite being linked to face each other in the past, the fight never came to fruition. Eddie Hall was forced to withdraw from the highly anticipated boxing match due to a bicep injury last year.

Meanwhile, Thor made his entrance into the boxing ring in 2021 and did so successfully by earning a TKO victory against Devon Laratt. Prior to facing Laratt, Thor competed and won in two exhibition bouts against Steven Ward and Simon Vallily.

The two Strongmen have continued to promote the fight on social media. In the build-up for the ‘heaviest boxing match in history’. wagers were offered by both participants to add an extra layer of chaos to the fight. Ultimately, Björnsson suggested that the loser should be forced to get a tattoo of the winner’s name on their body and Hall accepted the 2018 WSM’s offer.

The stars have aligned for the marquee boxing match as Core Sports made the official announcement on Wednesday. Streaming options and tickets are not yet available.

“🚨THE WAIT IS FINALLY OVER!!
-Almost two years in the making through endless hurdles, years of hatred all ends in the ring on March 19th 🦍🥊🦍-Stay tuned for ticketing and viewing info!” Core Sports shared.

With just over a month to finish preparations, Eddie Hall has been hard at work in the gym. The 2017 WSM shared a ‘Full Strength Boxing Session‘ last week and looks to be in excellent shape. Judging by the endurance Hall showed in his training session last week, the Strongman is preparing in a methodical fashion for his showdown with “The Mountain”.

Björnsson has also been testing his physical limits in preparation for the super fight. Thor, known for his massive physique, has dramatically downsized and looks to have traded his weights for jump rope. The 33-year-old star shared a physique update at the beginning of the month and showed off his cardio at the same time. With nearly two years of build-up for the fight, both combatants are taking training as seriously as they did during their legendary Strongman careers.

“The Mountain” underwent a major body transformation in order to facilitate his boxing acumen. After training for months, Thor revealed that his weight pales in comparison to his former Strongman weight. Hafthor mentioned that he weighs 145kg (319.6lbs) now, but once tipped the scales at 205kg (451.9lbs) during his Strongman tenure. Conversely, Hall admits he lost 77-pounds since no longer training as a Strongman and that was over a year ago.

Hafthor and Hall have a history of pushing one another in competition. With their highly anticipated boxing match set for Feb 19, fans will soon find out which Strongman better prepared themselves for combat.