Strongman Brian Shaw discussed his A2M torn hamstring treatment and if he plans to tune into the Eddie Hall vs. Hafthor Björnsson boxing match. 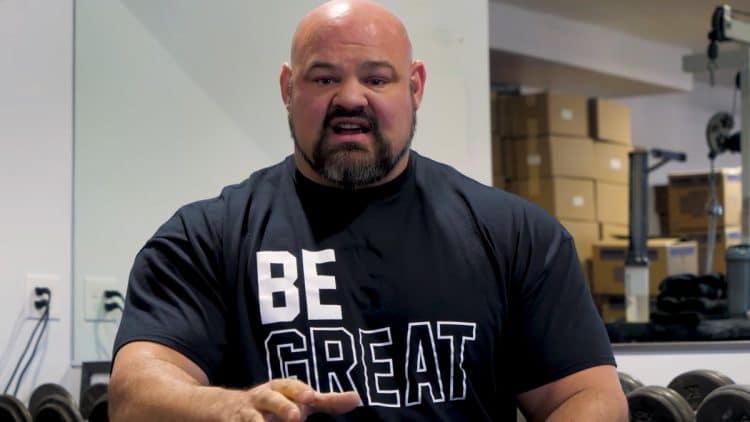 Brian Shaw is one of the most successful Strongmen to ever compete in the sport. Recently, Shaw took part in a Q & A session on his YouTube channel and gave an update on his hamstring injury and if he plans to watch the Eddie Hall vs. Hafthor Björnsson boxing match.

During his time competing in strength sports, Brian Shaw has managed to win the World’s Strongest Man competition a total of four times (2011, 2013, 2015, and 2016). In 2011, Shaw won the Arnold Strongman and the WSM in the same calendar year. His consistency in the sport has been lauded for some time as Shaw managed to replicate his 2011 season by winning the 2015 WSM and the Arnold in the same calendar year again.

Unfortunately, Shaw tore his hamstring during the inaugural Strongman contest at the 2021 Rogue Invitational. The injury was sustained on the elephant bar deadlift. Following the misfortune, Shaw was led to an overall seventh rank in the competition. Fellow strongman, Jerry Pritchett suggested that Shaw get a Platelet-Rich Plasma (PRP) treatment as it was the same procedure Pritchett had after an injury at the 2021 WSM.

Unlike Pritchett’s procedure, Shaw’s operation required the removal of A2M molecules from the blood which were injected back into his body along with platelets to accelerate the healing process

In a recent Q & A segment on Shaw’s YouTube channel, the Strongman discusses the progress made with his torn hamstring. From Shaw’s recent update, it appears his body took to the treatment quite well as he is reporting few if any issues since getting back to work.

“Yes, the long and short answer is definitely yes. I feel really, really good about where I’m at after that treatment. I am so thankful that Jerry recommended that. I’m so thankful to the clinic down there, and if you guys haven’t seen that video make sure to go back in the channel and check it out because I describe the treatment, what went on, and the update I guess, this is a great time to do the update. I gave it some time to kick in and I got back to work and I have not had one issue whatsoever. I haven’t felt my hamstrings with going back in and having them trained and loading them more. I’m very thankful for that. I’m thankful for Jerry. I’m thankful for Dr. Lundqvist for doing a great job on me.

She has checked in a couple of times since the procedure, and this is something that will continue to work for what I understand for 6-12 months. So, this is an incredible thing, and I can’t recommend it high enough. If you’re having an issue or something that’s going on like I was, if you have an injury, literally. It’s insane what the healing potential is of that. So, I feel great. Knock on wood.” Brian Shaw said.

As a popular Strongman himself, fans were quick to ask Shaw if he will be watching the boxing match between Eddie Hall vs. Hafthor Björnsson, scheduled for March 19. Despite the venue and dates changing, Shaw is excited to see two former Strongmen settle the rivalry once and for all.

“Well, I would say for me that I do plan on trying to watch it. I’m not sure how exactly I’m going to watch it or where I’m going to watch it but I’m curious about what is going to happen. I’m glad they finally picked a date, and it looks like it’s finally going to happen, so good for them. I feel like, quite literally, I guess we are coming up on 2-years since that was first announced. So, there’s been a lot of changes, venue changes, date changes, you know a lot of different things that have gone on that have been kind of hard to follow, to be fair. But it looks like they have a date, and it looks like they’re going to do it. So, yes, I’ll be tuning in.” Shaw said.

RELATED: Strongmen Brian Shaw And Gabriel Peña Pairs Up For Deadlift Session in Prep For 2022 WSM

Shaw will be unable to compete at the 2022 Arnold Strongman competition set to kick off in mere days given that he is still recovering from his torn hamstring. However, there is no shortage of marquee events coming up and Shaw admits he will have his eye on the boxing match between Thor and Hall.