The Strongman champion has lost a noticeable amount of weight and is currently sitting around 178kg/393lbs. 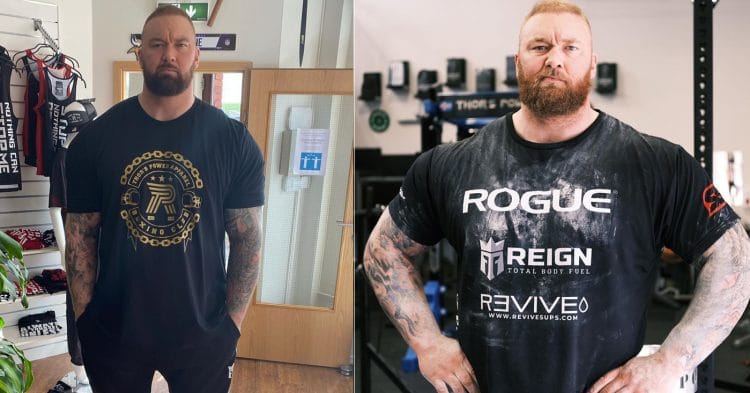 After Strongman icon Hafthor Bjornsson won his tenth consecutive Iceland’s Strongest Man event, he announced his retirement from the sport. The multiple-time Strongman champion and 2020 Arnold Strongman Classic champion explained that he’s doing it for his health, family, and we all know he wants to be in tiptop shape for his boxing match with Eddie Hall later next year.

Related: Hafthor Bjornsson Talks Boxing Match With Eddie Hall: “If He’s Not Ready, I Will Punish Him

Of course, Thor is still training hard and heavy but he has lost an impressive amount of weight so far while he conditions himself for the highly-anticipated bout.

Here’s a recent post where he clearly looks a lot slimmer compared to his usual, massive 400+lb physique.

This is 393 lbs bodyweight and about a 60-pound loss from when he started. And even at 6’9″ tall, it has made quite a difference in his appearance. No to mention, he’s apparently losing weight every day. Because the decision to shed lbs was for his health, it’s hard to find fault. Although many would have to have seen him prepare for the 2020 World’s Strongest Man competition and even improve his 501kg/1104lb deadlift world record.

But it’s still possible that Thor will come back in the near future as he explained in the post after he won the Iceland’s Strongest Man competition.

Either way though, his match with Hall is exciting and they’ve both been showing off their skills. Although, we still have a ways to go. But we’ll be sure to keep you updated on the progress and it can only get better form here.