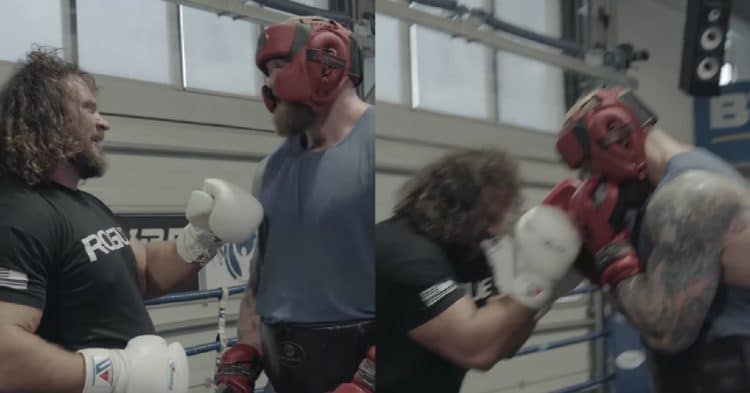 The only thing crazier than watching one World’s Strongest Man winner boxing, is seeing two do it. This was the case recently, when Hafthor Bjornsson stepped in the ring with Martins Licis.

Bjornsson has been working hard to prepare for a fight with another strongman, in the form of his bitter rival Eddie Hall. Unfortunately though, this bout has been delayed after Eddie suffered a terrible bicep injury, leading to him needing surgery.

However Thor has not stopped his training, as he is now set to fight arm wrestler Devon Larratt on the same card that was supposed to see him fight Eddie. In fact, a video was recently shared to YouTube that sees him taking on the lineal World’s Strongest Man Martins Licis, in a training session.

“Before he was just this stiff, heavy, lumbering strength machine. He’s slimmed down, but kept a lot of that muscle, so he still looks unreal with how much muscle and power this man holds. But he’s moving lighter on his feet, and I can see that he’s more in tune with his body, and that’s scary to witness.”

Martins Licis made it clear that he was not going to be actually sparring with Hafthor Bjornsson, but instead giving the Icelandic strongman an idea of being in there with someone his size. They work through some drills with Martins pushing Thor back, while he works body shots and gets an idea of how to move away from the forward pressure.

The idea of this training session was clearly to give Hafthor the feeling of being muscled around and wrestled in the clinch, by someone similar to Eddie’s size. While he has been doing a lot of training with people of different sizes, it is hard to imitate the type of beast that a top strongman brings to the ring.

Martins is quick to note that Bjornsson has pretty impressive cardio, explaining that he is having trouble keeping up. Nevertheless, he continues, even pushing past getting hit by a hefty body shot from the Mountain.

Following the session, Martins actually calls out Mateusz Kieliszkowski  for a fight, but not in boxing. He says that he would like to face the Polish strongman in the world of MMA.

“I want to do MMA. I’ve got a wrestling and jiu-jitsu background, I don’t want to waste it. Mateusz, let’s hug like friends hug,” Licis said.

Hafthor Bjornsson and Martins Licis ended this session with a bit of bike work, while the Mountain notes how important this type of work was for him. It will be interesting to see how this will translate to Thor’s boxing match with Eddie Hall, when that time finally comes.