After making the transition into boxing, Hafthor Björnsson is now calling for a fight with heavyweight champion Tyson Fury. 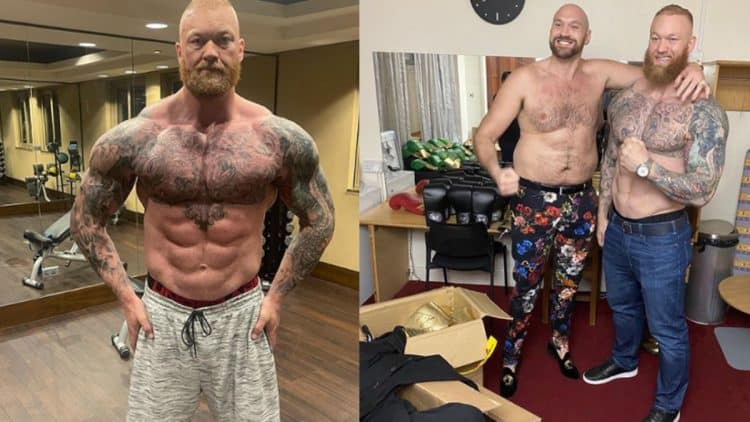 2018 World’s Strongest Man winner Hafthor Björnsson is ready to test himself inside the boxing ring against the world’s best. Bjornsson revealed on his Instagram stories that he is currently training for a fight and called out an ‘afraid’ Tyson Fury afterward.

At the end of last month, Björnsson and Fury teased a potential boxing match. Björnsson reached a new level of fame following his boxing contest against former strongman rival Eddie Hall. Tons of pre-fight commotion and promotion went into the heated contest, which ultimately saw the Game of Thrones actor win by unanimous decision in an action-packed fight.

A search for a new opponent has gone on for a while, and all signs pointed to fellow giant, Martyn Ford being next. Ford is coming off a canceled boxing affair with social media sensation Sajad Gharibi, well known as The Iranian Hulk. Ford and Gharibi were expected to settle a long-standing rivalry, though plans changed after a litany of issues arose before the event could take place. In the end, Ford announced the fight was off after suggesting that there were concerns about safety present.

Ford later revealed that he was ‘worried’ that The Iranian Hulk would kill himself if they fought. In response to the fight being cancelled, Gharibi announced plans to sue Ford’s team for a contract breach. Unsure of why a fight with Hafthor Björnsson never came about, Ford made it clear that ‘Thor wants it’ and that he wants it. Despite interest from other opponents, it appears Bjornsson has his eyes on Tyson Fury’s collection of gold belts.

Hafthor Björnsson to Tyson Fury: ‘Where the Fu** Are You? Are You Afraid?’

Following a few posts made to Instagram stories, Björnsson had choice words for the 6’9″ boxer and asked the WBC World Heavyweight champion to ‘show’ himself.

“Hey guys I hope you’re having a great, great day. I just finished my second session of the day, had a good session with my coach Billy Nelson,” Hafthor told fans in an Instagram story from the gym. “But hey, I have a question for one guy. Tyson Fury, where the fu** are you? I thought you said you’d come to Iceland. Are you afraid? Show yourself.”

This comes after Tyson Fury called out “The Mountain” last month, teasing a fight with the strongman star. Fury told his fans via Instagram stories, “I wonder if Thor could take a crashing right hand to that big jaw? Who would have Thor’s hammer? Would this mountain be too big to climb?” While many fans interpreted this introspective moment as harmless trash talk, it seems Björnsson is keen on settling his differences with one of the most decorated boxers of all time.

Björnsson has lost a considerable amount of weight as a result of his foray into the sport of boxing. He maintained a trimmed-down physique before his blockbuster showdown with Eddie Hall. In the aftermath, however, Björnsson revealed that he has lost even more weight (13.2-pounds to be exact), two months following the event.

Tyson Fury possesses some of the best footwork and credentials in the sport. Defeating a boxer of his caliber would be extremely difficult for an athlete, like Björnsson, who boasts far less experience. Should Tyson Fury sign the dotted line and face the strongman legend, it would be a massive step-up in opposition for Björnsson.