Hafthor and Tyson met after one of Tyson's speaking shows in Glasgow. 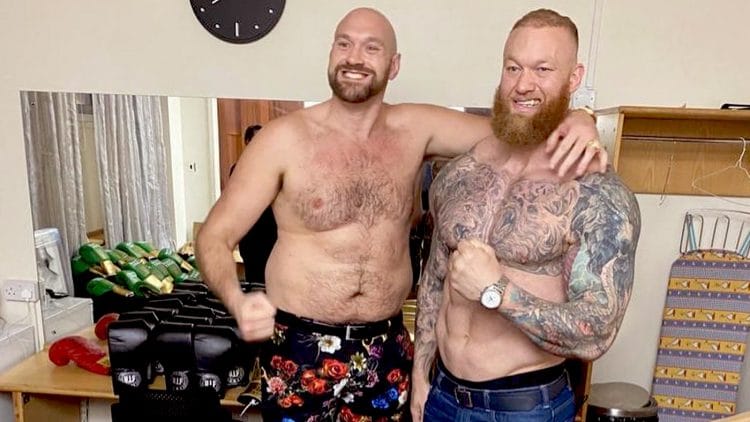 It looks like the WBC heavyweight champion, Tyson Fury, has met his match in the 2018 World’s Strongest Man Hafthor Bjornsson. They had jokingly compared their physiques and height. After his transformation it is safe to say former world’s strongest man Hafthor won in the physique compartment, with Tyson just edging him in the height compartment, even though they are both officially 6 ft. 9 inches (2.05 meters).

Hafthor had some more praise words for Tyson.

“All jokes aside, what an honour meeting Tyson Fury tonight and going to one of his shows! Looking forward to learning more from the champ himself in the near future.” said Bjornsson.

Hafthor is relatively new to the sport of boxing, but he has already had some fights and has a scheduled fight against a fellow strongman, Eddie Hall, following their deadlift world record disagreement. Hafthor’s fight against Eddie Hall was already supposed to happen, but Eddie tore his bicep in training. While he was recovering, Hafthor fought against one of the greatest arm wrestlers, Devon Larratt. He won that match with a TKO in the first round. There is no doubt that Hafthor had gotten some tips from Fury on his boxing style and technique, which will be a massive advantage for him.

In their interaction, we could see Tyson inviting Hafthor to his training camp, and he would be there to help with the weight training and getting Tyson into shape.

“When you finish your fight, come into camp with me, train me weights.” said Tyson.

Hafthor then pointed out that his transformation is mostly because of his diet, and that he currently doesn’t train weights.

The conversation then shifted towards boxing, with Tyson asking Hafthor how much he could last in the ring right now.

“Right now I’m in good shape, but I need to get in a better shape.”

Tyson, one of the best pound-for-pound fighters in the world, points out that experience really matters when it comes to boxing.

It was great to see the best of two worlds, and two giants give advice and talk about their experiences in boxing and fitness. If they do end up coming together in a training camp, it will be scary to see them get the best out of each other. Tyson’s boxing ability and Hafthor strength seems like a perfect combination for a boxer.