Hafthor Björnsson is looking for a new opponent and Tyson Fury seems ready to step in. 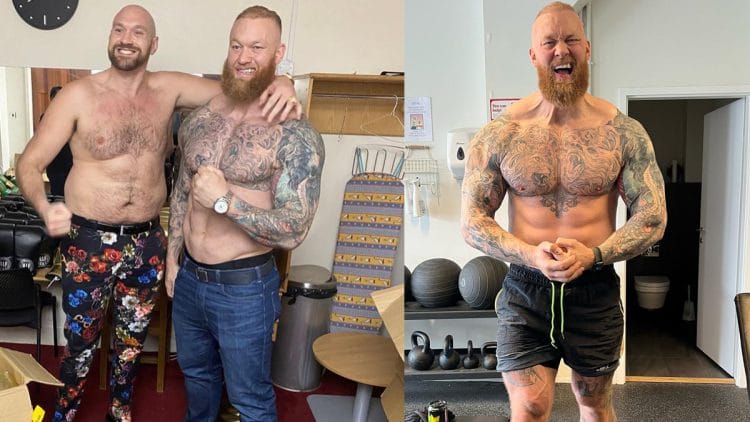 Ever since he won his boxing match against Eddie Hall, Hafthor Björnsson has been on a search for a new challenge. The talk about his next match firstly revolved around a possible rematch with Hall, as he got a tattoo and thus filled out all the requirements for his second chance. However, Hafthor cleared the air out by stating that it is not the right time for a rematch and that he is looking for a new opponent.

Hafthor Björnsson’s search has been going on for a while, and it seemed like he would end up fighting Martyn Ford. However, Hafthor might have just gotten the greatest turnaround possible, as Tyson Fury called him out. The Heavyweight Champion of the World and one of the greatest boxers in history, Tyson Fury, shared this message on his Instagram story.

“I wonder if Thor could take a crashing right hand to that big jaw? Who would have Thor’s hammer? Would this mountain be too big to climb?”

Hafthor Björnsson acknowledged Fury’s message and responded with an Instagram story as well.

Hafthor Björnsson also made a reference to the “What happens when an unstoppable force meets an immovable object?”. He added that we might find out soon, so some sort of exhibition fight between Björnsson and Fury could be very possible.

Related: The Rock Ready To ‘Bang On Some Iron’ With Hafthor Björnsson, Plan Training Session Together

Hafthor Björnsson and Tyson Fury are already acquaintances, so there is no ‘bad blood’ involved with their possible fight. The two men met just before Björnsson’s fight with Eddie Hall, where they had some banter about each other’s physiques, but also praised each other for their success.

Looking at Hafthor Björnsson’s and Tyson Fury’s physical shapes, the two men have quite similar stats. They are both 6 ft. 9 inches (2.05 meters), while Hafthor is 15-20 kilograms (33-44 pounds) heavier than Fury. What makes the biggest difference between them are their boxing abilities.

Tyson Fury’s boxing career is unthinkable, as ‘The Gypsy King’ beat the likes of Wladimir Klitschko, Deontay Wilder, and Dillian Whyte. Furthermore, he has never lost a boxing match in his professional career. Tyson retired after brutally knocking out Dillian Whyte, but said that he would be open for exhibition matches with celebrities. It seems that this is the case with Björnsson.

Hafthor Björnsson, on the other hand, does not have the experience of Tyson, but possesses some mind-blowing power. He had two boxing matches, as he firstly beat the legendary arm wrestler, Devon Larratt, with a KO. Björnsson then went on to beat his arch nemesis, Eddie Hall, with a unanimous decision from all the judges. Despite lacking boxing experience, Hafthor Björnsson definitely has the strength. He was the 2018 World’s Strongest Man and won numerous major Strongman titles.

Hafthor Björnsson recently revealed that he has been lacking motivation, which resulted in him losing 6 kilograms (13 pounds). Now, with the extent of his and Fury’s teasing about a potential fight, Hafthor could finally have something to look forward to and get back to his absolute best. It is safe to say that everyone would love to watch these two giants step in a ring and it is truly looking like a realistic scenario.