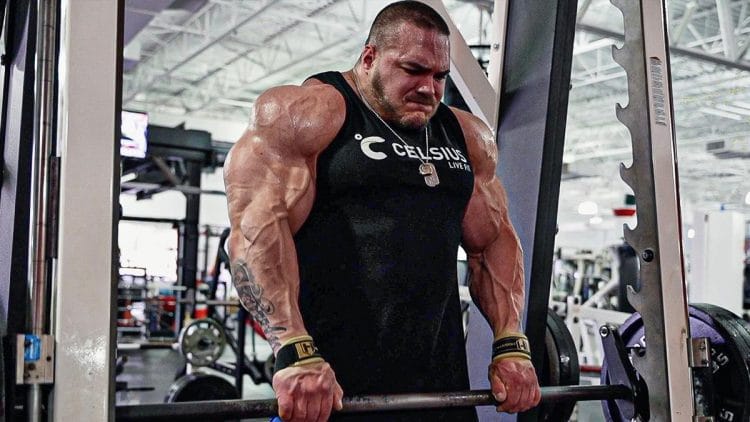 2021 Arnold Classic winner Nick Walker recently shared a shoulders and triceps workout. Walker is one of the highly touted prospects in the Open Pro division. By winning the 2021 Arnold Classic and 2021 New York Pro within one year of earning his IFBB Pro card, Mutant has already established himself as a serious contender in the division. The New York Pro win qualified Walker for 2021 Olympia. The fifth place finish at the 2021 Olympia prompted Nick Walker to take time off and build his physique to compete against the most elite competition that the division has to offer.

Nick Walker strongly believes that a bodybuilder has to get most of the work in during the off-season and he is currently training hard to make the necessary gains. Recently he shared an off-season shoulders and triceps workout on his YouTube channel.

At the beginning of the video, Nick Walker revealed that his weight has dropped down to 292lbs at the time of shooting the video. It was down almost 8lbs from the previous ~300lbs. The past week was a de-load week for Nick Walker and he plans to slowly ramp things up in his off-season training.

Nick Walker stated that rear delts are one of the most neglected parts when it comes to bodybuilding and started the workout with reverse pec deck to work this muscle group. Walker performed a triple drop set of reverse pec deck and moved on to the next exercise.

The traditional standing shoulder press is probably the most common shoulder workout in gyms around the world. Typically, standing shoulder press works most of the large muscle groups in the upper body that include pectorals (chest), deltoids (shoulders), triceps and trapezius (upper back). These muscles are not only important for the aesthetics but also for performing most of daily activities for average humans. Nick Walker said:

“A while since I do these. But I like these. It really isolates the shoulder more.”

He performed one heavy set of nine reps and then finished the exercise with another set of 20 reps.

Nick Walker next performed this isolation exercise that engages specific and stubborn muscles that are otherwise difficult to mobilize. Dumbbell lateral shoulder raises work the muscles like serratus anterior (muscles along the ribs under the armpit) along with delts.

Through the initial sets, Nick Walker worked his way up to 50lbs dumbbells in each hand. He finished the workout with double drop sets with partial reps.

Nick Walker next performed cable side lateral raises. Machine or cable workouts allow an individual to control the weights better and reduce the chances of injury. In addition to this, the cable workouts also keep the muscles under tension in the positive as well as negative phase of the movement. This in turn, brings about hypertrophy.

Nick Walker’s shoulder routine involves a lot more lateral raises as opposed to pressing. While explaining the logic behind this, Nick Walker said:

“I like to do a lot of laterals in my shoulder routine rather than pressing. I feel like I have big enough shoulders. So now for me, it’s just… continuously to build them but sculpt them now more than anything. So a lot of rear delt work, a lot of side delt work and a little bit of pressing.”

Nick Walker performed three sets of 12 to 15 reps and moved on to the next workout.

Using the Smith machine for shrugs eliminates the need to control the weight of barbell or dumbbells. Shrugs are a staple for building the muscles in the neck area. Nick Walker performed three sets of 12 to 15 reps on the Smith Machine and went on to perform the next movement.

Nick Walker finished the shoulder workout with three sets of rear delt cable fly and shifted his attention to working the triceps.

Triceps rope push-down works all three parts of the triceps. However, it is especially good for the outer head of the muscle. Nick Walker performed three sets of this movement and worked his way up to 20 reps to get the blood flowing in the triceps.

Starting with the dips on pin-loaded dip machine, Nick Walker didn’t know ‘if it was going to be comfortable or not’ to use it. However, he did fine and cranked out two working sets employing the rest-pause method in the second set.

This movement served as the finisher for Nick Walker’s triceps workout. The 27-year-old pulled off two working sets and one drop set on the machine to end the triceps workout.

Nick Walker incorporated chest and abs movements in the workout. He performed three sets of 12 to 15 reps on the Pec Deck machine with short rest periods to do a ‘little chest pump work’. He concluded the workout with three sets of leg raises on the machine to work the mid-section.

“We are incorporating more rest days. I’m pretty much doing two days on one day off split now… Mentally I don’t like it but it’s doing my body really good. So we’re just going to keep this going… Probably when prep starts, we’ll train more frequently. Right now, we’re in the off-season.”