After an uneventful season in 2021, Men's Open competitor Hassan Mostafa intends to let his work do the talking in 2022. 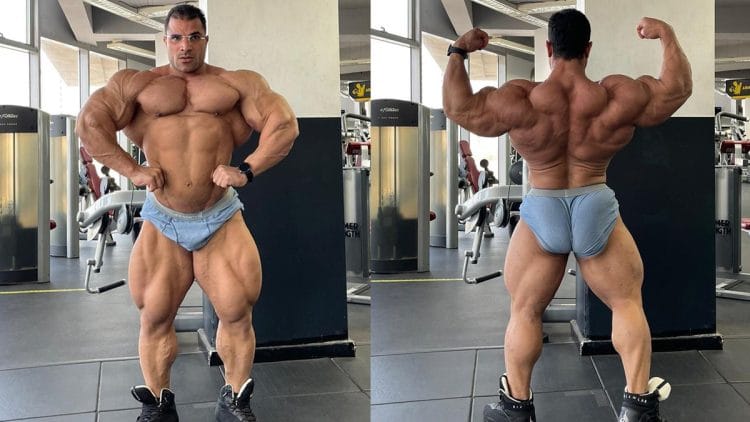 Bodybuilder Hassan Mostafa struggled to find the podium last year but is ready to reassert himself as one of the sport’s brightest prospects. In a recent Instagram post, Hassan Mostafa showed his current progress 13 weeks from the Orlando Pro.

Hassan emerged as a threat in the Men’s Open division after his fourth-place appearance at the 2020 New York Pro. Unfortunately, after the show, Hassan was sidelined and forced to go to the hospital for an infection caused by hemorrhoids. Mostafa made up for only competing at one show in 2020 and took part in a total of seven IFBB pro events in 2021. Most notably, Hassan placed ninth at the 2021 Arnold Classic and a month later, placed thirteenth at Mr. Olympia.

As one of the most muscular athletes in the division, if Hassan brings up his conditioning, many believe that package would be incredibly difficult to compete against on stage. Mostafa is known for pushing the pace in training and showed as much after working out alongside Rafael Brandao at Flex Lewis’ Dragon’s Lair Gym. In addition, Mostafa has spent time training with four-time Arnold Classic champion Flex Wheeler and longtime veteran Jose Raymond in 2021.

Hassan Mostafa Bringing Up Conditioning Ahead of Orlando Pro

After sharing a recent physique update, Hassan made it clear that he intends to bring up his conditioning. With room for improvement after placing thirteenth at Olympia last year, Egypt’s Hassan plans to deliver his best package yet at the Orlando Pro in July.

“13 weeks out. Everything going as planned👌” Hassan Mostafa posted.

With vengeance on his mind in 2022, Hassan shared a most muscular pose and a back double bicep on Instagram Tuesday.

After maintaining such a busy season in 2021, it’s a tall order for bodybuilders to maintain their diets, cycle, and physique for such a long period of time. Mostafa’s build looks massive and full, but athletes need more than an impressive physique to win a bodybuilding event. Showcasing size, symmetry and conditioning are all pivotal factors in the eyes of judges when it comes to winning first place.

Despite being a younger competitor in the sport, Mostafa has quickly made a name for himself with size. The completeness of his physique will surely spell problems for the Men’s Open landscape this year. With 13 weeks until the Orlando Pro, Hassan is determined to turn in a statement performance in a few months.