Watch: Rafael Brandao Back at Dragon’s Lair Gym To Train With Flex Lewis 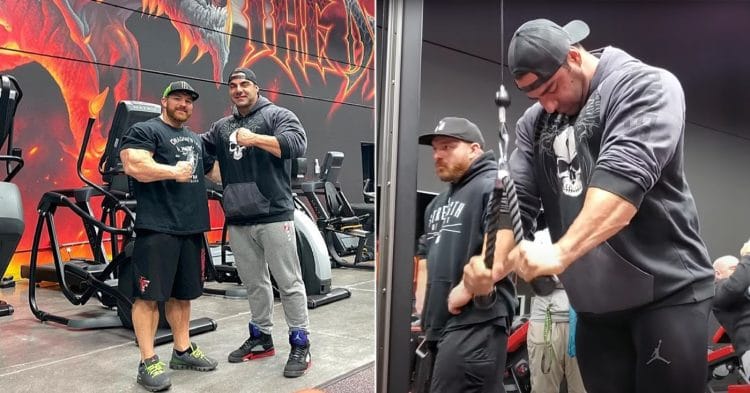 Brazilian professional bodybuilder Rafael Brandao has come a long way, not only in his physical development but also with his English-speaking skills. Brandao recently returned to Dragon’s Lair Gym where he trained with owner and seven-time 212 Mr. Olympia Flex Lewis, but this time at the new Las Vegas location.

While you will see clips from the arm training session that consisted of pushdown, extensions, dips, and curls, the focus of the video was the interview with Rafael Brandao for Jay Cutler TV.

It started off with them talking about was how much his English skills have improved. Brandao mentioned being frustrated when he first came to Dragon’s Lair at the Boca Raton, Florida location to train with Flex for several months.

“When I went to train with Flex in Boca Raton, I couldn’t speak English. So the first two months was like terrible for me because Flex was teaching me every day some tips and I couldn’t understand; I was very frustrated.”

This experience drove him to hire a language coach where he did five sessions per week for six months. But training every day with Flex also helped a lot.

Brandao expressed his gratitude for Flex who was very patient with him. “I’m so happy and very grateful to have Flex because Flex teach me a lot, not just about training, but about life, business, English.”

The two met at the 2018 Toronto Pro contest but it wasn’t until the 2019 Arnold Classic, where Brandao took 7th place, that Flex Lewis invited him to train at his gym. Two weeks later, he moved to Florida for nine months and has made incredible improvements working with the Welsh Dragon.

That brings us to the discussion about Flex Lewis who opted out of the 2020 Mr. Olympia so that he could get therapy and heal from past injuries to be able to come back and make his debut in the Open division at the 2021 Olympia this year.

But back to Brandao, he’s very optimistic about the future of Brazilian competitors seeing a lot of success.

“I know Brazil is going to make history in bodybuilding.”

While he’s becoming a bigger name in the sport, Brandao feels like the pressure is a good thing because it pushes him to be better. He’s also doing this not only for himself but for his wife, family, sponsors, and country.

But training with Flex is good for both of them because they can push each other to train hard, as he mentioned that sometimes they really need it.

As for his nutrition, Brandao confirmed that he’s still working with well-known coach Chris Aceto.

If you’re familiar with his story, Brandao was very skinny in his youth and he’s always had a fast metabolism that has required more calories. He has to eat lots of food to be able to stand on stage with the other genetic freaks.

When asked what his goals are for 2021, he mentioned possibly doing the Arnold Brazil in September, but it really depends on his progress.

He talked about the difference between training at Dragon’s Lair and his home in Brazil and how it affects his discipline and progress. Back home he’s always busy doing things and it’s harder to maintain the same type of hardcore discipline.

But he knows that Dragon’s Lair is where he goes to take his progress to the next level so it’s easier to stay on track.

“This is bodybuilder life, everything that I need to make me better.”

Rafael Brandao is on his way to bigger things and we look forward to seeing what he brings to his next competition.

Jay Cutler is a bodybuilding legend and always speaks his mind when topics of controversy make their way into his...

Looking to make gains in preparation for the 2022 Arnold Amateur show, Andrew Jacked got busy in the gym with...