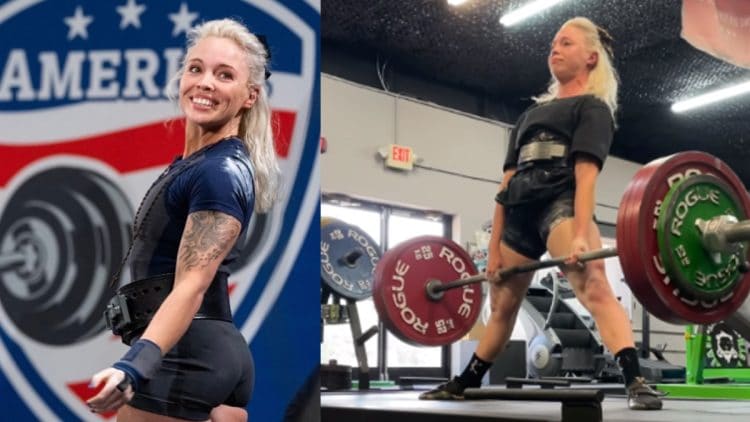 The 2x IPF World Champion, Heather Connor, has finished her powerlifting preparation and is now ready to chase her third title. She will attempt to do so at the 2022 IPF World Classic Powerlifting Championships, which will take place from June 6-12, 2022, in Sun City, South Africa. Heather recently completed her final heavy deadlift session in the lead-up to the competition, and she even managed to surprise herself. She shared a massive 195-kilogram (429-pound) raw deadlift on her Instagram.

Heather Connor’s recent deadlift was also an Unofficial U47KG IPF World Record, since it was 19 kilograms (41.9 pounds) heavier than the current record. Heather also holds that official IPF Record, as she set it at the 2019 IPF World Classic Powerlifting Championships.

To make the lift even more impressive, Heather Connor’s 195-kilogram (429-pound) pull is 4.3x her bodyweight, since she weighed in at 45 kilograms (99 pounds) at the time of the deadlift. Heather only used a lifting belt, while her style of deadlifting combines sumo stance with a mixed grip.

“Last heavy deadlift session. Heaviest I have pulled before a comp 👀 not bad after traveling almost 16hrs the day prior 😍.”

Heather Connor has already built a lengthy career and an impressive resume, as she has been competing since 2014. She has taken part in 21 sanctioned competitions, and won 15 of them. Heather is one of the greatest pound-for-pound deadlifter and has broken multiple World Records in the aforementioned event.

Heather Connor has taken part in two editions of the IPF World’s and won both of them. A new crop of prodigies will try to derail her attempts to extend her streak in the next two weeks. However, Heather’s experience will prove valuable as she attempts to not only achieve first place, but also break the World Record by 40 pounds.