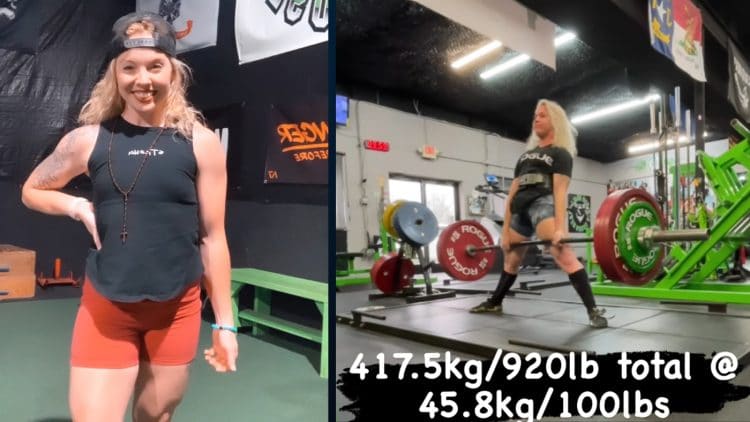 Following a very successful year of 2021, Heather Connor is transitioning into the new year nicely. She is a world-class powerlifter and competes in the 47 kg category. In addition, Heather set a new All-Time World Record Total of 410 kg (903.9 lbs), at the 2021 ABS Pro held on January 27th, 2021. Not even two months have passed, and Heather has published a training video on her Instagram showcasing an even heavier Total of 417.5 kg (920 lbs).

Heather’s first lift was the deadlift, where she only used a lifting belt, while her style of lifting was sumo. In the bench press event, Heather added wrist wraps to aid her in the lift, and in the last lift, which was the squat, she also put on a pair of knee sleeves.

Heather Connor has been competing since 2014 and has taken part in 20 powerlifting competitions. She has won 14 of those, most notably the 2017 and 2019 IPF World Classic Powerlifting Championships. Heather is also a 4x American National Champion, and a 2x All-Time World Record Holder in the 47/48 kg category (depending on the Powerlifting Federation).

The All-Time World Records are:

Heather is especially known for her deadlift abilities, having been the most dominant deadlifter in her category for some time now. That is seen in the rankings, as the second-heaviest deadlift in the category is 17.5 kg (38.6 lbs) lighter than Heather’s.

The fact that Heather Connor can compare her lifts in training with current world records reiterates the fact that she is one of the pound-for-pound strongest powerlifters in the world. In addition, she will compete at some point, and some world records will certainly be broken and improved.