Ten of the hottest and fittest women on the planet 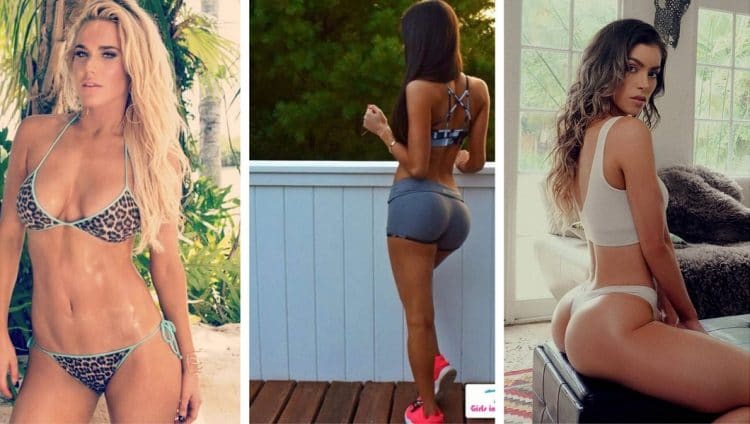 Today is the day you thank the interwebz Gods for social media and hot girls who like attention. Today, we look at the ten of the hottest fit babes you’ll see online. Sure, you’ve probably seen or following some of them, but not all of them.  Besides, even if you are following all of these babes, it won’t hurt refreshing your memory. They are all young, hot, fit and absolutely love posting pictures of their butts online. So let’s cut the chit-chat and get down to the real reason you are here.

The Columbian bombshell Anllela Sagra is a personal coach, bang energy model and she is very fond of posting pictures in a thong and having next to no clothes. Her insta account is currently sitting at 11.2 million followers and every day more people click on her profile to her admire her amazing glutes and abs.

Karina’s rise to fame came on the heels of her being Calum Von Moger‘s girlfriend but since separating from Moger, she started doing her own thing. She posts healthy/vegan recipes, posts bikini selfies, various videos of her working out and doing insanely hot yoga stretches. Need some health food ideas but you also enjoy looking at really hot girls? Give Karina’s ig a check

Guusje is probably the least famous name on the list but she’s also mind-blowingly fit and hot.  The Dutch hottie has been a fitness enthusiast since the age of 14 and has been a personal trainer since 16.  By the time she was 17, she was already a social media sensation and a personal trainer at MR4PT in her home town in the Netherlands. She also started to study two higher fitness educations: ASM – National Academy of Sports Medicine and Pregnancy & health-cool stuff!

Part-time cosplayer, part-time powerlifter, Amber is the American bombshell of your dreams.  She used to go by the username of “Swoleesi” because of her uncanny resemblance to Daenerys Targaryan. These days she’s recovering from a broken foot and upping her strength back.

Bea is an undefeated Swedish UFC  bantamweight. Yep, good looks and fully capable of beating your ass. She used to compete in Muay Thai, so for real, don’t mess with her. Besides being a professional ass-kicker, she’s also a very hot babe that likes posting his pictures on social media.

Nicole is a beauty blogger, fashion model, and social media fitness persona. That’s basically all that you have to know about her. She’s also a twitch user, so if you are fellow twitcher, give her a follow.

Probably the most famous entry on this list, Jen is the owner of one of most recognizable pair of cheeks on Instagram. When talking about internet-famous people and insta celebrities, it doesn’t get any more famous than Jen Selter. She’s traveled the entire world and showed her but in a thong on basically every country on the planet.

If Jen Selter is #1 social media fitness persona, Michelle has to at least be in the top 5. She has 13 million insta followers and keeps pumping content on a daily basis. Her story is something of an underdog “come from behind victory” type of story. She was working as a waitress in a local bar in Venezuela, then in her early 20s she came to America, discovered modeling and social media and the rest is as the saying goes, history. She’s part bodybuilder, part model, and part social media fitness persona. She has also been on the cover of over 30 fitness magazines.

Much like Michelle, Katya was just a smalltime girl who dreamed big and got very famous in a very short time frame thanks to social media. She’s a practicing vegan, a model and online fitness coach who possesses one of the most impressive looking buts on Instagram.

Pro wrestling fans know very well this young lady as she has been turning heads for a quite a few years now. Firstly billed as a sexy and seductive corporative figure and manager to her real-life husband “Rusev”, she even sported a mock Russian accent.

However, these days she’s just a typical American female wrestler but she just goes by the name Lana instead of her real name. She was a dancer, model, actress, playboy model, and lastly a WWE Diva superstar. She’s very fond of posting bikini and semi-naked pictures on her Instagram, so if you are looking for someone new to follow and stalk on a daily basis, Lana’s a good choice.

Report: Hadi Choopan Likely Out Of 2019 Olympia After Being Denied US Visa