Colombia is a magnificent country. It’s filled with rich natural resources of coffee, bananas, various tropical fruits, gold, flowers and other culturally unique exports. Lately, it is most known for that cool Netflix show that takes place there and everyone at work keeps telling you about it.

Netflix and coke cartels aside, there is another extremely addictive and very popular export that came out of Colombia in the last couple of decades. That, of course, is none other than the talented Golden Globe-nominated actor, John Leguizamo. 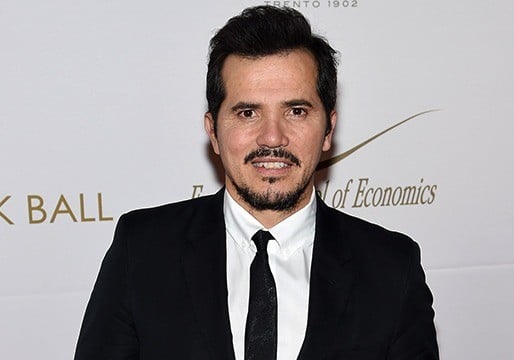 What, He’s from Colombia, google it if you don’t believe me. Oh yeah and the mega hot and mega-famous Instagram fitness model/Goddess Anllela Sagra also comes from Colombia. Soo… let’s talk about her for a bit.

Anllela Sagra is currently 29 years old according to her date of birth October 6, 1993

Well for starters she comes from Medellín, the former crime capital of the world. So you know she’s seen some serious sh*t. You can also cool it with the dick pic DM’s, because she’s got a boyfriend. Moving along, this lovely lady is known first and foremost for having an incredible ass. 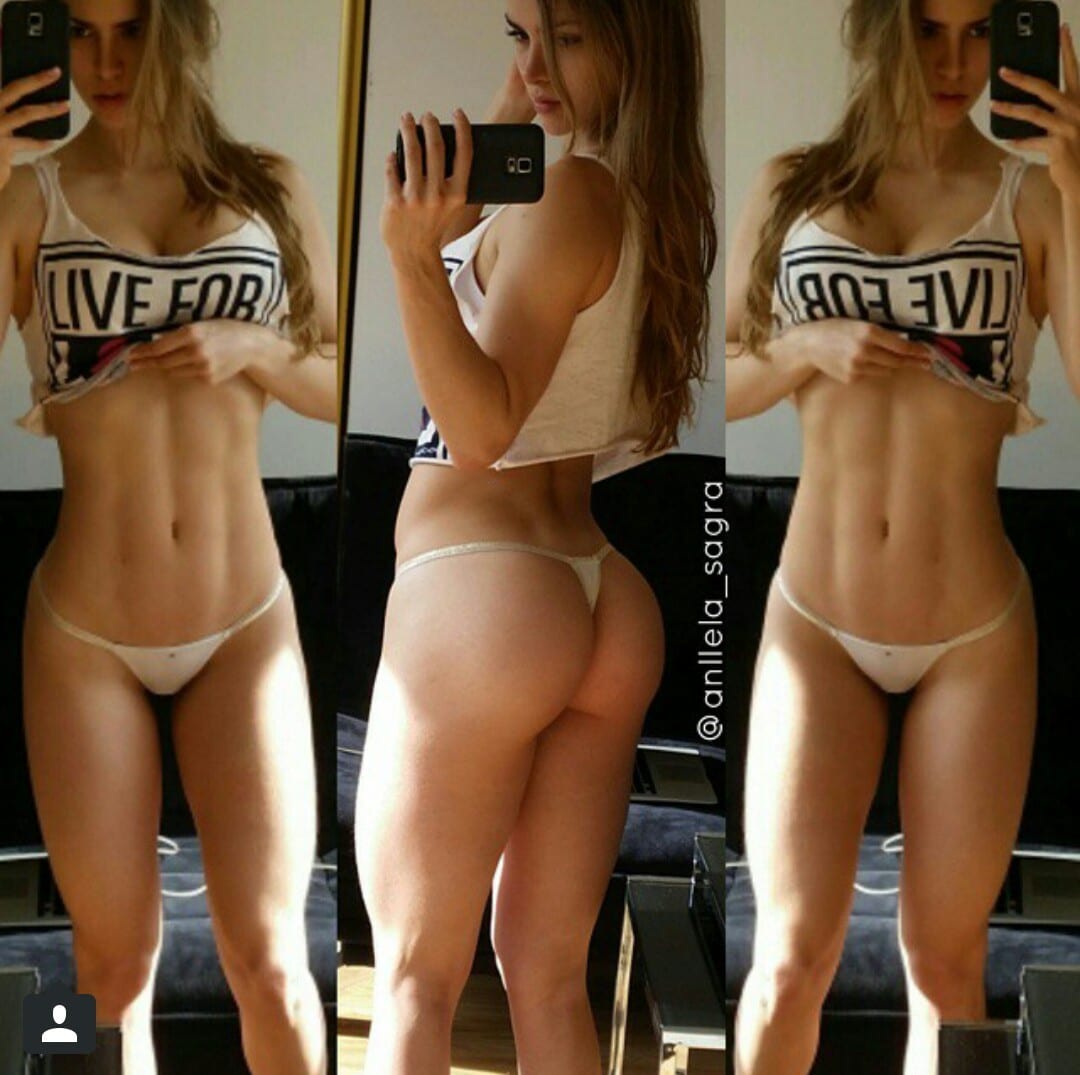 Men would wage wars for it and Women would sell their souls to the devil to have it as theirs. It’s a glorious product of hard work and constant iron pumping. Anllela Sagra‘s body is what hundreds if not thousands of wannabe Instagram fitness chicks aim to become. Sagra is to fitness basic bitches as to Arnold is to leg day skipping gym bros around the world. So, yeah you could say she’s not only stunning but also pretty damn inspirational.

Anllela Sagra Before The Booty Fame

Now that we’ve marveled at her glorious glutes, let’s take a deeper look at her origin story. As mentioned above, she comes from Medellín, Colombia and she is just 23 years old. Before the Instagram booty fame, she was a young Latina fashion design student that wanted to be a fashion model. She was like your run of the mill normal good looking girl that just wants to “get toned for the summer”. Then about 5 years ago she discovered the house of iron and slowly started her transition from cute latina to Aztec Goddess of fitness and booty gains. 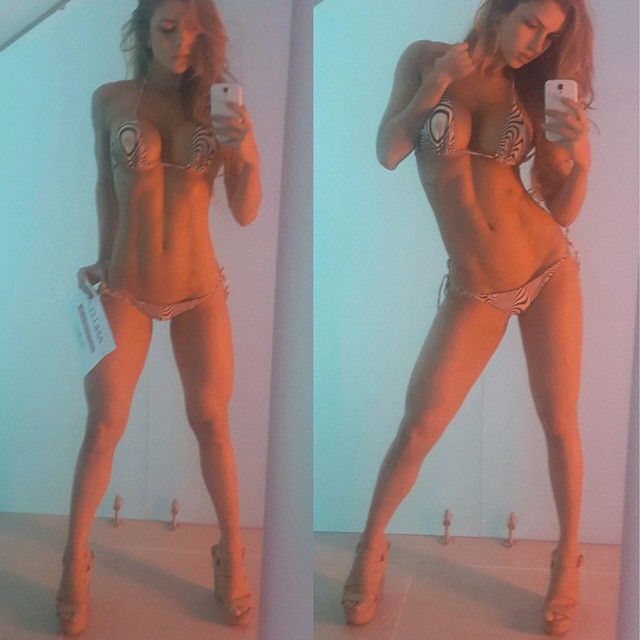 What’s interesting about Miss Sagra is that despite having several Instagram accounts, she has zero “before” pics of herself. If I asked you to describe to me how many moles does she have on her body, you’d have more than enough material to work with. However, if I told you to find me a picture of how she looked like before she started lifting, you’d be sh*t out of luck.

But have no fear merry fit people of the internet, after conducting some detective work, I have found something. In a 2015 Reddit thread, a user named “nicolds182” claimed he knew Sagra when they were in high school and provided a picture as evidence. 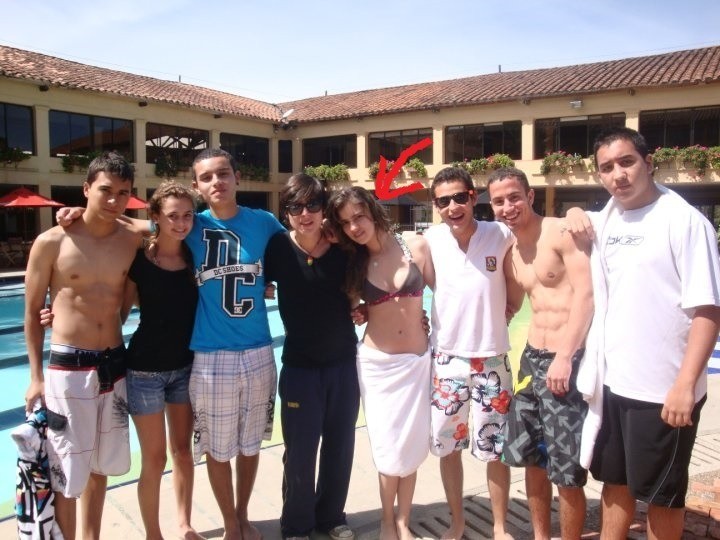 Although not the best of the pictures or the most credible of sources, it’s a good reference point. What’s interesting is that after training only for a brief period, she competed in her very first fitness contest and placed 3rd! Yep, she was that good that she got top 3 placement in her very first competition ever. 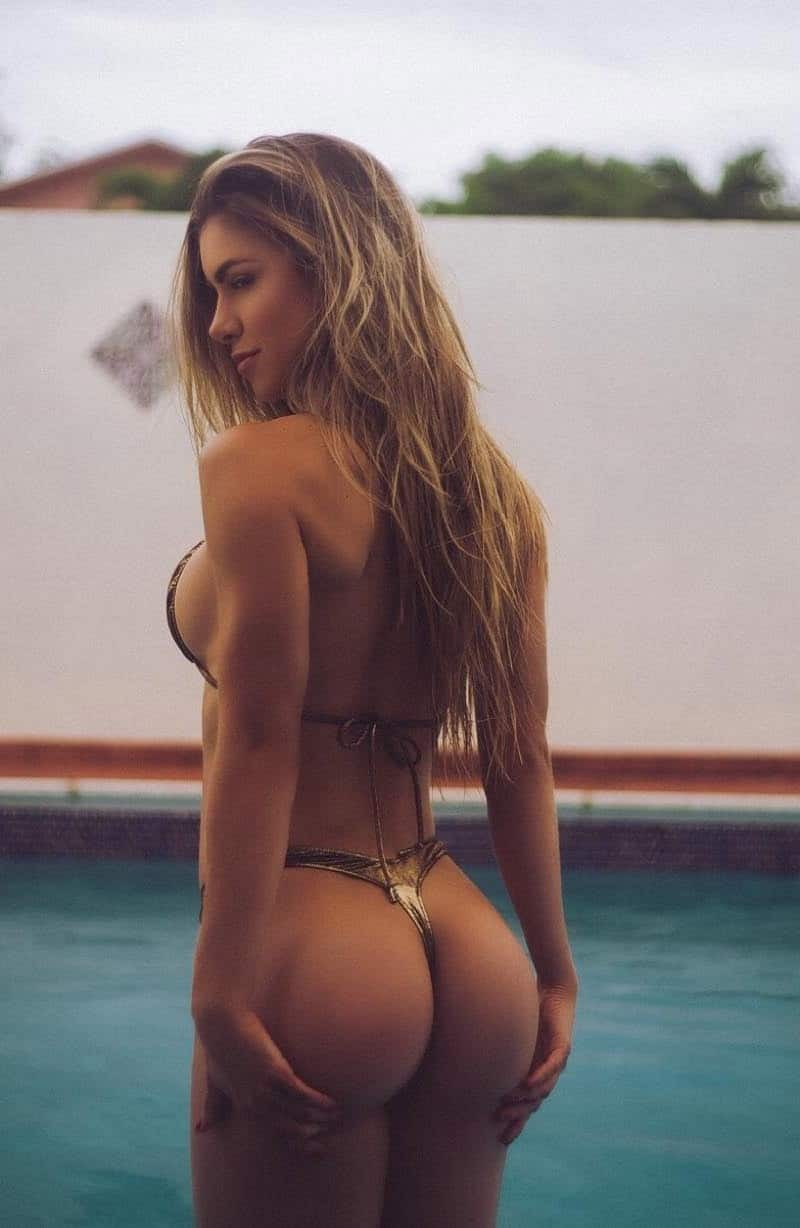 There is not a lot of credible sources for her fitness history or her life history in general, which makes writing this article extremely difficult. But that stuff doesn’t even matter all that much. What matters is her internet life, which began sometime in 2013 when she joined Instagram. As many other millennial girls that like taking pictures of themselves she opened up an Ig account and sure enough, the internet noticed. 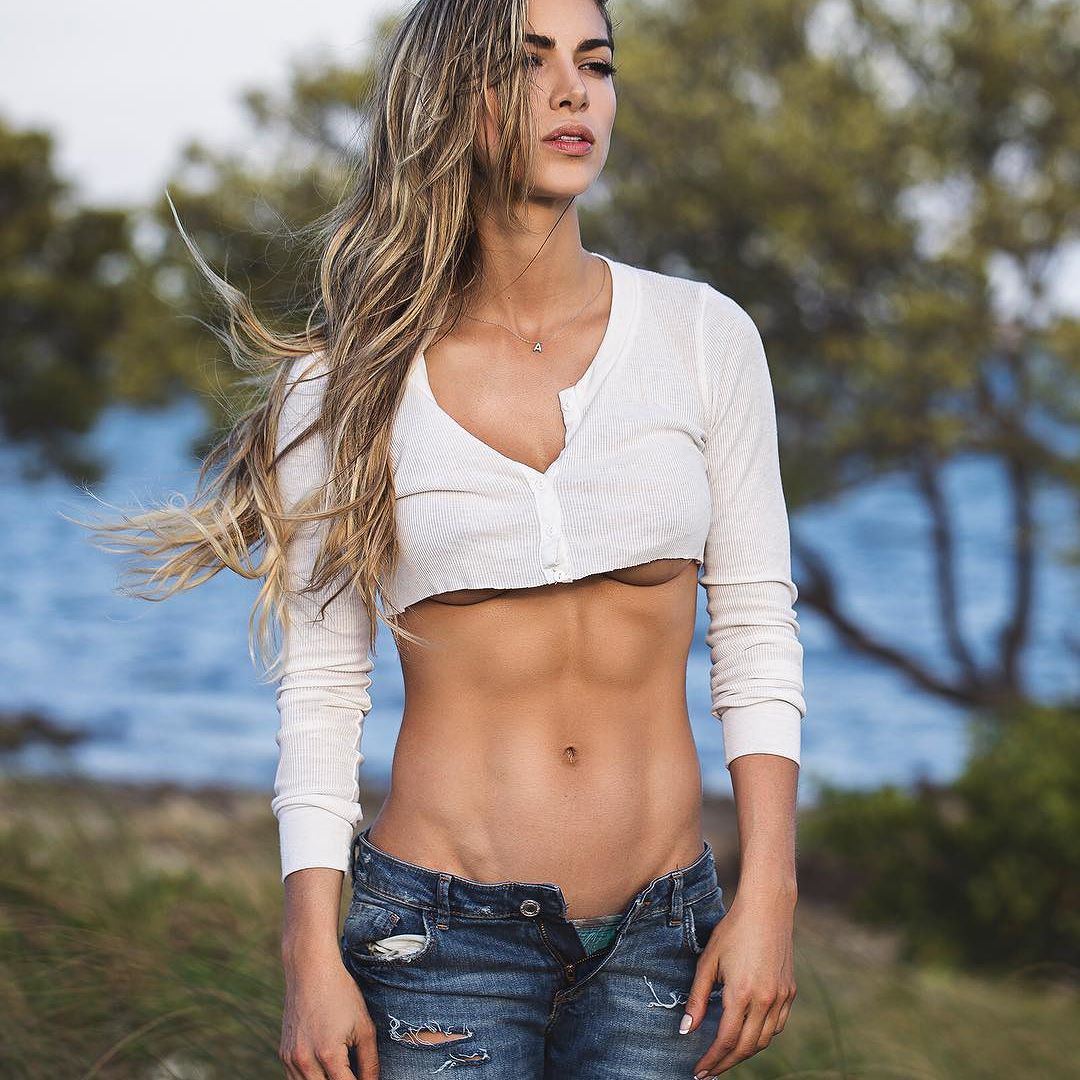 Her account blew up almost immediately and grew to million followers in less than a year. Which isn’t that surprising when you see the pictures she posts there on the regular. Since then she has grown into one of the biggest female fitness celebrities of today. She has several Instagram accounts, each filled with sexy pictures and millions upon millions followers.

Ok, now that we’ve gotten acquainted with her history, let’s see some of her workout and diet routines.

As you can see in the video above, she loves her abs(and so does half the internet) and goes low carb when she trains them or her arms. But when she trains her lovely glutes or legs, she carbs up. What’s also interesting to note she trains twice a day. Although she doesn’t specify is it weights both times or a cardio/weight combination, It’s safe to say she does a little bit of both.

Supplement wise, she’s a sponsored athlete of 1up nutrition so she takes everything from their pre-workout to their BCAA’s. What’s also interesting and shocking is that she is a hot Instagram fitness model and she isn’t sponsored by Fit Tea. Which gets her +10 hotness point right off the bat.

Her fitness journey has come a long way from the young latina that started doing weights just do look better as a fashion model. She now has her own workout plans, a workout app, sells her own customized merch and even does online transformation coaching! And judging by pictures of some of her clients, she really knows how to do her job. 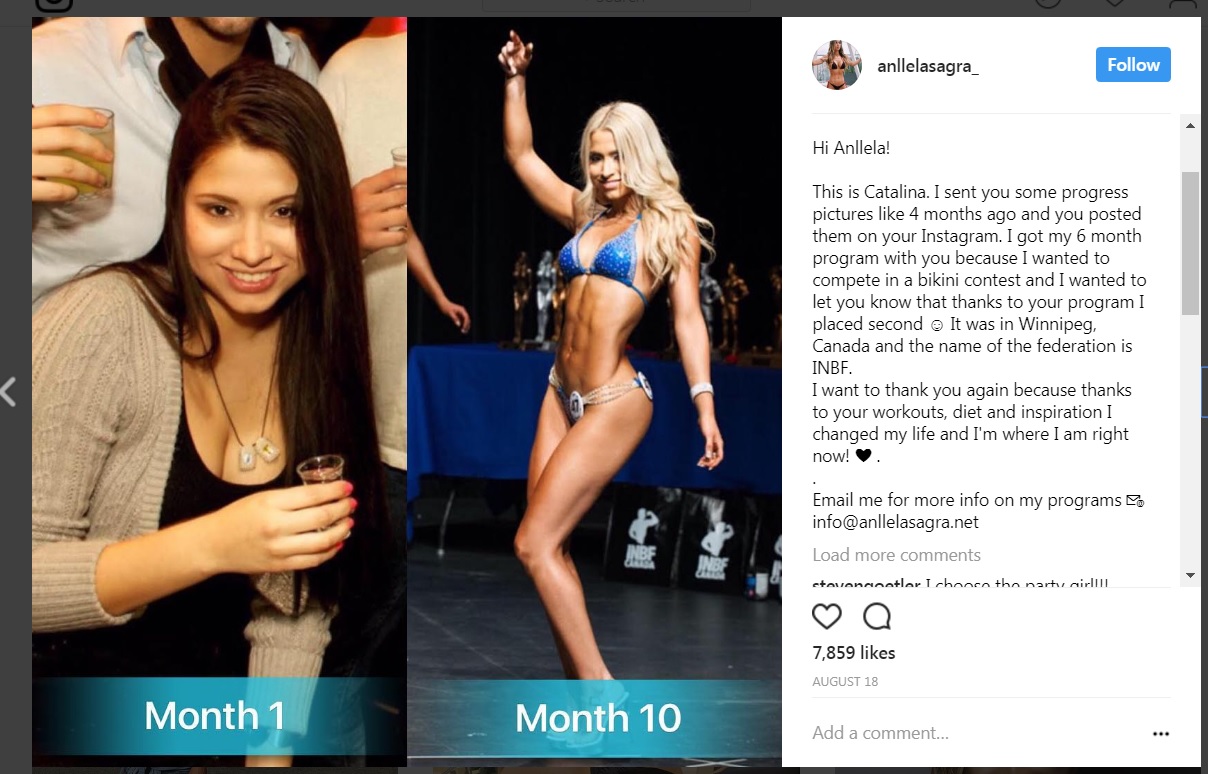 It’s worth noting that she does online coaching for guys too, not just for gals. So if you are looking to transform your body, and need the right coach to get the job done, send Anllela an e-mail. You can even try your luck with an “accidental” dick pic. Not saying I’m encouraging that kind of behavior but if that’s your kind of thing, this is your best shot.

So what does the future hold for the Anllela Sagra? Well, the most popular thing among fitness celebrities is workout supps. Pre-workout, post workout, protein-you name it. So far it seems she hasn’t really ventured into that territory but If I was a betting man I’d bet she releases a supplement line in the next year or two.

The bottom line is that she’s 24 years of age and has the world on the top of her hand. She has her entire life in front of her and all this because she turned her passion into her work. Let this be a lesson to all you if you have something you are good at turn it into your passion and your drive in life.

WATCH: The 5 Popular Exercises Made Better!