Kyle Kirvay is considered to be in the league of bodybuilders who lifted some monstrous weight. 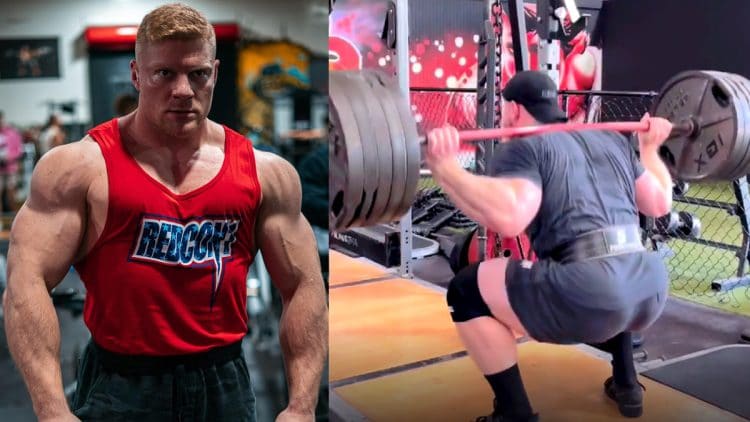 Pro bodybuilder Kyle “Tiger” Kirvay recently went viral and was noticed because of his amazing feats of strength. Following Kyle’s astounding performance in his first powerlifting competition, many people noticed how freakishly powerful he is. At that event, it was especially seen how strong of a squatter Kyle is. In addition, in his recent Instagram post, Kyle “Tiger” Kirvay is seen high-bar squatting 495 lbs (225 kg) for 22 repetitions. Kyle is not interested in treadmills, bikes, rowing machines, or stair masters but loves to use free weights for his cardio. That session was one hell of a cardio session.

Kyle’s squats were completely raw, as he only utilized a lifting belt and knee sleeves. For the first 15 reps, it looked like Kyle was toying with the weight, and only the last few reps looked heavier. Kyle captioned the video as a “5 plate cardio”, but said that he would “still rather do this than 20 minutes on the stairs,”. Kyle also stated that this was his first squat session since the powerlifting competition, which was almost a month ago.

You can watch the squat set here:

Kyle “Tiger” Kirvay’s squat set is very similar to the squat sessions performed by Tom Platz. Tom was also known as “Quadzilla”, and arguably had the greatest legs in the sport of bodybuilding. One of Tom’s greatest squat sets was 525 lbs x 23 reps. Kyle’s recent set is potentially as impressive as Tom’s.

Kyle can also be considered as one of the strongest bodybuilders ever as he has squatted 800+ lbs before. Other bodybuilders who managed to do so are Ronnie Coleman, Stan Efferding, and Johnnie Jackson.

Kyle “Tiger” Kirvay is currently 26-years-old, but his birthday will be in just 2 days. He is still extremely young, but has already found success in both bodybuilding and powerlifting. Because of this, many people compare him to Larry Wheels, as they carry a muscular frame and possess incredible strength.

Kyle Kirvay took up professional bodybuilding in 2017. He had three competitions that year and stood on the podium 2 times. Both were at the 2017 NPC Steve Stone Metropolitan Championships. In 2018, Kyle got his IFBB Pro Card in two separate divisions. He earned it by winning the 2018 NPC Universe Championships in the Men’s Heavyweight and Classic Physique divisions. Kyle only had one since then, and it was the 2020 IFBB Chicago Pro, where he placed 16th.

As a powerlifter, Kyle only took part in the 2022 USPA Battle at Atilis, so all of his competition PRs originate from there.

Following his powerlifting performance, we contacted Kirvay. The bodybuilder revealed his plans to enroll in another powerlifting competition this year, but with better preparation this time. However, Kyle won’t quit bodybuilding, and plans to compete either this or next season. His latest squat set looks perfectly balanced between two sports, as it is extremely heavy, but also consists of a lot of volume.

‘Anorexic Dog’ Hafthor Björnsson vs ‘Fat Pig’ Eddie Hall Official Face-off: ‘You Only Won the WSM Because I Retired.’