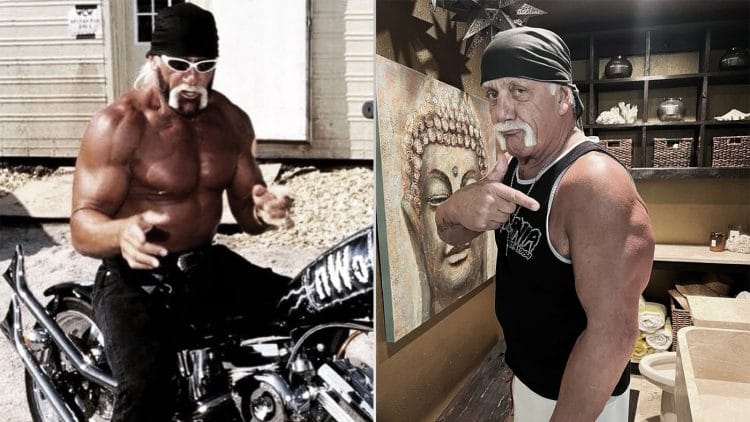 At 6ft-7in tall and weighing 302lbs, pro wrestling legend Terry Bollea AKA Hulk Hogan was a massive individual during the heyday of his wrestling career. However, the 68-year-old adopted an intense training program over the last few months. As a result, Hulk Hogan has lost a huge amount of weight and dropped down to 275lbs.

Hogan posted his latest photo on his Instagram account to show off his leaned-down physique. The 20-plus lbs weight loss is incredibly impressive considering his age and all the wear and tear his body has sustained over the 30-year long pro wrestling career. In spite of the weight loss, Hulk Hogan’s arms look massive in the photo which is another impressive thing for someone his age.

“Back to my 9th grade weight 275lbs brother HH,” Hulk Hogan wrote in the caption.

Hulk Hogan’s photo comes after fellow pro-wrestler Rick Flair raised concerns over the former’s health during an episode of his podcast Rick Flair Wooooo Nation Uncensored. Hogan and Flair were archrivals in the pro-wrestling arena but are really close friends in real life. While talking about Hogan’s health, Ric Flair stated:

“He’s having some really bad health issues, but he keeps up with me. We support each other, good and bad. When I was in the hospital, he flew up that day like everybody else that came up to see me…Hulk was gracious, Jimmy Hart was great. I don’t remember seeing them because I was in a coma but they made the effort to go. Those are the kind of things that mean a lot.”

Ric Flair added that Hulk Hogan has undergone at least 25 surgeries in the past ten years. That is mainly due to the bodily damage sustained during his pro-wrestling career. Hogan has not mentioned any health issues or responded to Flair’s comments so far. Therefore, the alleged health issue is still a mystery.

Chris Hemsworth will play Hulk Hogan in an unnamed biopic

Hulk Hogan is a living example of someone who has been through all the ups and downs. Australian actor Chris Hemsworth, best known for portraying Thor in Marvel’s Avengers, is set to play the legendary wrestler in an unnamed biopic.

Hogan is a true physical specimen. Achieving the necessary body composition to match his attributes is something that very few can realistically achieve. However, Hemsworth is no stranger to massive body transformations. Very few details about the Netflix biopic on Hulk Hogan are available at the moment.

Nevertheless, Hemsworth posted a photo of him with Hogan’s trademark long hair and arms earlier this year. Hulk Hogan seemed to be pretty impressed with Hemsworth’s efforts and reposted the photo on his Instagram account to show his appreciation.

“My brother has that Hogan Pump on Jack,looks like he could slam Andre brother HH,” Hulk Hogan wrote in the caption.

However, it is a funny coincidence that while Hemsworth is bulking up to recreate Hulk Hogan’s massive physique in reel life, the latter is actually leaning down in real life!

The God of Thunder himself, Chris Hemsworth is looking to take on the role of a peak Hulk Hogan for...

Chris Hemsworth is the actor who plays Thor in the Marvel Avengers film series and is now showing his fans...

The budding relationship between Hulk Hogan and Ronnie Coleman is becoming one of the best things in sports right now....