The 2022 Mr. Olympia frontrunner takes his fans through an intense leg workout. 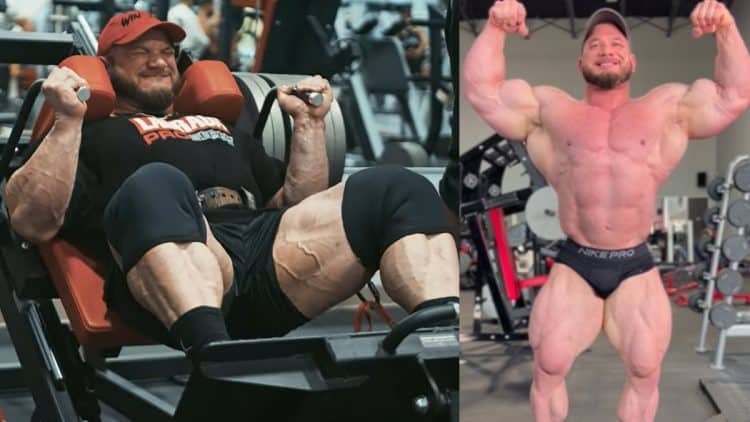 “The intensity is what you can’t translate on paper,” says Hunter Labrada before pushing through his workout like a beast, not letting any obstacle or weight slow him down. As the off-season draws to a close, he is focusing on crushing each workout.

As a result of his 2020 Tampa Pro win, the bodybuilder entered his debut Olympia later that year and earned an eighth-place finish. A year later, he won fourth place at the 2021 Olympia, with the 2021 Arnold Classic champion Nick Walker placing fifth.

The two archrivals are consistently posting physique updates leading up to the marquee show in 2022. The 2022 Mr. Olympia is less than four months away, and both athletes are in the midst of their off-season preparations.

On August 3, 2022, Labrada uploaded an intense leg workout session on his YouTube channel. The workout was filmed during the American Fitness Expo Weekend in Houston.

Hunter Labrada started his leg day routine with the seated hamstring curl. He used heavy weights while a belt helped him maintain stability.

“[The] biggest thing I guess you all seen from a couple of leg sessions from the new split now, a little change we decided to make is we moved all the calf work to the end of the session. I was starting to get a lot of knee pain when I was doing my hamstring curls, and obviously, calves go across the knee so having them all jacked up, tuned up, tight, when I was doing my hamstring curls wasn’t helping. So, we’re going to start the session with hamstrings today, and we’ll do the calves at the end after we’re done with everything else.”

The next compound exercise in his routine was a banded hack squat. He adds the band to the machine for additional resistance in the concentric phase of the lift.

Nick Bagley had a suggestion for Hunter Labrada, “I was watching his movement pattern, I was watching his feet. His left side, when he gets up, it kind of turns in. So we talked about changing foot position a little, just kind of opening up so that it doesn’t drift after that first rep, to make things more comfortable for his hips.”

The bodybuilder moved to hip presses after burning his quadriceps doing hack squats. He has often revealed that doing unilateral presses or pulls allows him to fix muscle imbalances.

“Done with the hacks, the hip press. Done everything today except for calves at the very end and seated, I guess. All the compounds for quads are done.”

Hunter Labrada finished the leg workout (barring the calf exercises) with leg extensions. He logged each exercise with the sets and reps during the entire workout.

“With the log book, you know it’s an awesome tool in the off-season and prep. In the off-season, if that log book is not moving every single workout or at least every other workout, I’m doing something wrong. It’s a great judge for the off-season. When we’re in prep, it’s a great tool because the way my metabolism is, I’ve done enough preps to know my numbers should not be dropping off until I’m six weeks out.”

He focused on a few adductor working sets and explained why he believes it’s a great way to grow your legs.

“This is the best way to improve legs in my opinion cause no one really trains adductors hard. Unless your legs are touching the mid though in your front pose, you could use more adductors. Anytime you kill negative space, these opening gaps in your physique, it makes a huge difference in how you look.”

Next, Hunter moved to the calf exercises, beginning with machine-standing calf raises.

“So, the trade-off felt lovely on my knees, not doing calves before hamstrings. But, it sucks doing these in the end. Especially after how heavy the standings have gotten. Definitely, some degree of quad stabilization is still needed.”

“Today was a doozy, honestly. I was sick for the last six days. Yesterday was the first normal day. I have had food poisoning or something, down by eight or nine-pound from the last leg day but still pushed all the numbers. That’s a good thing because, to be honest with you, on some days it doesn’t make a lot of difference, but legs, compound, wearing a belt, that little bit of weight definitely makes a difference.”

As the bodybuilder continues to push himself, he is in the midst of preparing for the 2022 Olympia, which will take place on December 15-18 in Las Vegas, Nevada.

It’s his goal to flex his way to the gold and beat Mamdouh “Big Ramy” Elssbiay, the reigning champ!