The reigning Classic Physique Olympia champion's new quads and hamstrings workout is a must try to 'toast your legs' in the gym. 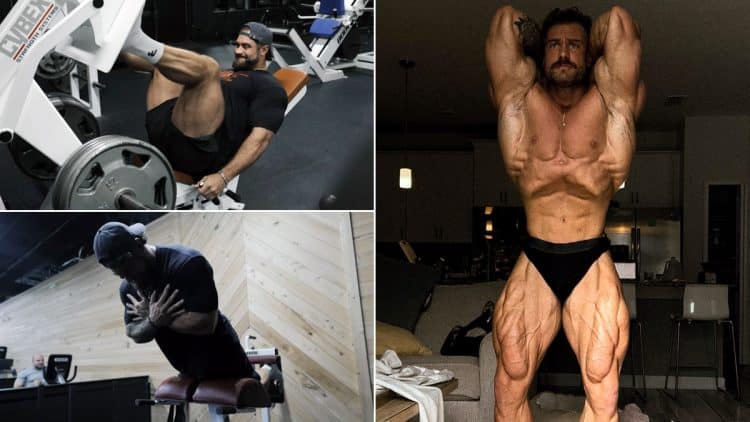 Classic Physique Olympia champion Chris Bumstead recently shared an ‘injury preventative’ leg day workout. Bumstead is among the best bodybuilders of the current era. He became the Classic Physique Olympia champion in 2019 by defeating Breon Ansley and defended the top spot in 2020 and 2021. The 27-year-old will attempt to score his fourth consecutive win in the division when Olympia returns to Las Vegas in December 2022.

CBum’s off-season training has proven to be effective as he has made massive improvements in his physique since recovering from a severe case of Covid-19 infection around last Christmas. Additionally, he just got Mesenchymal Stem Cell (MSCs) Therapy to boost his immune system and kidneys.

On his YouTube channel, Bumstead recently posted a leg day workout. In this particular session, the hamstrings and quadriceps were targeted specifically.

“I messed up my lower back. So I’ve been going to a chiropractor three times a week just trying to take care of myself. It’s actually been helping a lot in decompressing my spine… But today’s going to be an injury-preventative leg day…” Chris Bumstead revealed it at the beginning of the video.

The 27-year-old revealed that he recently put a lot of stress on his knees while playing basketball. As a result, he resorted to a new warm-up exercise – walking backward on an elliptical machine. Bumstead attributed this new warm-up to the ‘Knees Over Toes Guy’ Ben Patrick who is a proponent of sled pulling and walking backward to train without hurting the knees. CBum stated that he did not want to set up the sled and everything that goes with it. Therefore he opted for this movement to warm his legs up without hurting the knees further.

After getting the blood flowing into the muscles with a warm-up, Chris Bumstead started the session with leg curls and inner thigh squeezes to target the hamstrings and quads, respectively.

Leg curls are an isolation exercise that primarily targets the hamstrings (biceps femoris, semitendinosus, and semimembranosus) and calf muscles (gastrocnemius and soleus muscles). However, they also activate the gluteus, quadriceps, and the front of the shins during the eccentric phase of the movement. Bumstead performed two sets of leg curls and sandwiched a set of Hip Abduction between those two sets.

The knee joint is crucial in performing most of the leg movements and warming it up properly is crucial for injury prevention. CBum stated that he prefers to start his leg day workouts with hamstrings as it helps to get the knee joints warmed up.

“On my leg days where I do quads and hamstrings, I’m trying a new thing. We used to always start with quads but I’m starting with some hamstrings now. It’s easier to warm up my knees that way. It’s harder than it is to curl. So warming up here…”

Chris Bumstead then moved on to the staple of lower body workout in gyms across the world – the good ol’ leg press. This movement primarily targets the quadriceps and works similar muscle groups that squats activate. However, since they are a seated workout, leg presses remove upper body muscles from the equation and help isolate the lower body muscles to a greater extent.

Chris Bumstead used the Cybex Squat Press Machine for this movement. According to him:

“I’m using the Squat press because it recreates the motion of the squat a little bit naturally. But obviously, it’s a leg press so a little less stress on the joints, lower back and everything…”

While explaining the technique to get the most out of the workout, Chris Bumstead stated:

“What I’m doing purposely to try and not hurt my knee and to get the most out of this – I’m doing a rest-pause with two different foot placements. So I’m starting really wide and feet pointing outward (where I am) a little bit stronger. I’m going to try and work up to a set where I can do like ten (reps) with difficulty and then I’m immediately going to put my legs in the middle (of the footpad), toes more straight – a little more quad focussed.”

Chris Bumstead advised not to put the feet on the lower end of the pad to avoid hurting the knees. He performed sets of the leg press with the rest-pause method and worked his way up to 20 reps with nine weight plates – one more plate than the previous week.

After getting his ‘legs toasted’ with leg presses performed to failure, Chris Bumstead hits back extensions – the movement he terms the favorite movement to get a good stretch in the hamstrings.

Chris Bumstead performed two sets of this movement before moving on to the next one. CBum explained that as he raises his upper body from the bent-over position, he squeezes his glutes and hamstrings to pull it up rather than involving the lower back. This in turn avoids lower back issues.

Chris Bumstead wrapped up the workout with a superset of leg extensions and Sissy squats. According to him, the goal of this superset was:

“The goal is just to make these that aren’t that hard – as hard as possible… And try not to die!”

Chris Bumstead performed a set of leg extensions machine and went on to perform a set of 60 Sissy squats by positioning his body on a machine in such a way that his feet were locked under the pads of a machine and the backrest of the machine supported the back of the knees.

This position forced his quads to pull the body down and glutes to push the body all the way up – without putting a lot of stress on the knees. While explaining the benefit of this technique and the superset in particular, Chris Bumstead said:

“This is one of those things too where when you get to the end of the prep, and you’re trying to build like detail to your legs and not just size – this will help make you crispy and detailed because you have to focus too much on the mind-muscle connection.”

Bumstead’s pushing the pace a lot harder lately in training. The decorated professional has even informed his fans about the cycle he intends to follow this season. Overall, he stated that he had significantly reduced everything in his cycle and believed he looked much better as a result. Back in his early days, Chris Bumstead used four or five compounds, but now he uses only two. Samir Bannout, former 1983 Mr. Olympia, described Bumstead’s cycle and pointed out that even Arnold Schwarzenegger, in his heyday, performed best on two substances.

Paleo vs. Keto: Which Diet Is Best?