The beef continues: Men's Open competitors Valliere and Awodibu continue trading barbs ahead of 2022 Olympia while discussing the aesthetics vs size debate. 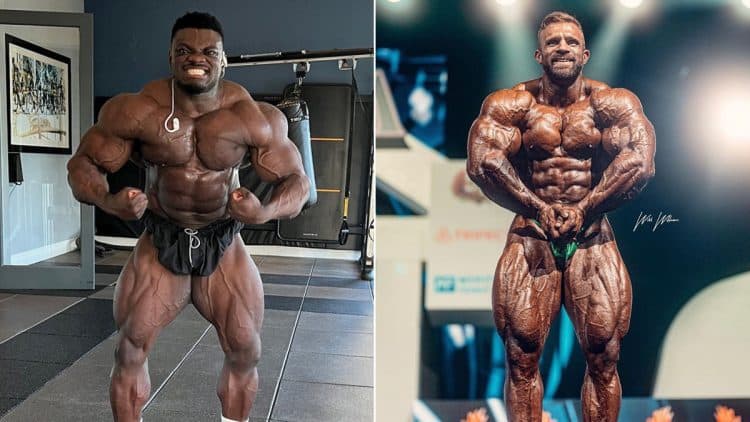 The countdown until 2022 Mr. Olympia has begun and bodybuilders Iain Valliere and Blessing Awodibu have embroiled themselves in a heated rivalry. In a video featured on the Olympia TV YouTube channel, Awodibu promised to whoop Valliere’s ass at Olympia after the two discussed size versus aesthetics in bodybuilding.

Bodybuilding’s Open class houses some of the biggest and freakiest athletes in the sport. Blessing Awodibu, on the other hand, represents aesthetics with sharp conditioning and a thin waist. The bodybuilder made his Men’s Open debut in third place at the 2021 Indy Pro. Despite the momentum, he gained courtesy of his domineering social media presence, the Nigerian-Ireland native wasn’t able to win a show last year and finished the New York Pro in sixth place, respectively.

Vowing to bring his best package to date, “The Boogieman” exited the shadows earlier this year and blew away his competition by claiming back-to-back titles at the 2022 Indy Pro and the New York Pro. After earning his Olympia qualification as a result of his Indy Pro victory, the up-and-comer has set his sights on seventh-place Olympia finisher Iain Valliere.

Unlike the aesthetic features of Awodibu, Iain Valliere quickly rose to prominence in the Open class with grainy detail and impressive size. Valliere earned his Olympia invitation in mid-July after defeating Antoine Vaillant by a single point in the finals at the 2022 Vancouver Pro. Before 2022, Iain qualified and placed at Olympia in seventh place over the past two years.

Unimpressed by Awodibu’s recent success, Valliere isn’t ready to call him a top bodybuilder. The two traded insults online last week, which triggered a contentious discussion about whether size or aesthetics hold more weight when judging a bodybuilding contest.

During the video, Valliere said size is ‘in’ but emphasized that any Olympia champion has to be complete. He added that reigning Mr. Olympia Big Ramy‘s size will be a ‘deciding factor’ against former champion Brandon Curry this year.

“I mean, obviously that’s the ideal build in bodybuilding and that right now has been Ramy. Ramy has still a good waistline, he’s not blown out in the midsection. He can still pull up and hit a nice front double with a nice, elongated midsection and good shape. That extra size he has over Brandon is the deciding factor in my opinion.” Iain Valliere said.

“When I say mass monsters are in, I’m not saying, [Francisco] ‘Paco’ Bautista, you know, I’m not talking about like a zombie physique where it’s just mis mash of muscles and oodles of ugliness. I think, obviously, to be the greatest bodybuilder on the planet, you do have to have everything.”

You can’t be significantly lacking in any department and claim to be the best bodybuilder on the planet, obviously. But I think if you’re, barring all things being even, more muscle, equal conditioning, someone with slightly better shape versus someone with more size, I think the size is winning nine times out of 10.” Iain explained.

According to Blessing Awodibu, you can’t compare mass monsters of the past like Ronnie Coleman and Dorian Yates to today’s athletes. “The Boogieman” believes bodybuilders with size also had aesthetics in the past.

“You can’t compare the mass monsters of the early days to the mass monsters today. Back in the day, you’re talking about Ronnie Coleman and Dorian Yates. These guys have aesthetic physiques. Small waist, beautiful shape, we’re… I don’t know, I think that’s rare today. You can’t compare the guys now to Dorian Yates or a Ronnie Coleman.” Blessing shared.

Valliere countered by saying aesthetics aren’t what they used to be. He added the ‘game has changed’ and conditioning is now different.

“Well, just like you can’t compare the aesthetics guys today with Flex Wheeler either. The game is different. Physiques are different. Bodybuilders are different. We’re chasing different champions. You know, there’s no guys that look like anybody from that. Conditioning is different now. Valliere said. The whole look in bodybuilding has changed. I think that goes to both sides of the spectrum. I think the aesthetics guys aren’t the same and I think the mass monsters aren’t the same.”

The seventh-ranked Olympian said the bodybuilding community is in a state of confusion because they are unsure of whether to favor size or aesthetics and detailed conditioning.

“I think we are, like Tim said, sliding slightly all-in to the center into somewhat of a hybrid. I think right now we’re in that confused line where perhaps one year a champion of Brandon Curry and one year a champion of Ramy, where like are complete opposite ends of the spectrum. I think it’s kind of widdling the people chasing down closer to the center. That’s really where I see it going.” Iain concluded.

Awodibu on Defeating Valliere At 2022 Olympia: ‘You’re Going to Get Smoked’

Awodibu says he’s determined to defeat Iain at the Olympia after the Open bodybuilder kicked him while he was down after losing in New York last year.

“Listen, all these guys, all these guys talk. Actually, Iain, you know, people think I’m like bullying you but I’m not bullying you bro. You jumped on my case last year. When I was down, you kicked me bro. Everybody was making fun of me and you were right at the very front of it.

“I’m just telling you, you’re going to get smoked at the Olympia. All you guys that called me an Instagram bodybuilder, I’m competing to prove all of you guys wrong. You guys are going to make excuses bro.” Blessing told Iain.

Iain didn’t mince words, he believes Blessing is chasing him, not the other way around. Valliere said he’s already proven himself to be a top 10 bodybuilder in the world after placing seventh at Olympia in 2020 and 2021.

“If this is what keeps you training hard and working hard, and makes you think one day you might beat me, then I’m all for it.” Valliere told Blessing. “I’ve been to the Olympia twice and I proved myself. You’re the one now chasing me. If you want to chase me, that’s great. I welcome a challenge.”

Blessing said he had respect for what Iain has accomplished in the sport thus far but intends to ‘whoop his ass’ at Olympia later this year.

“It’s not because I don’t like Iain. I actually respect that man. As a bodybuilder, I respect him. But you know, Iain is very easy for me, he’s too soft. He cries all the time. That’s why I like poking at him. The fans love this shit. Every time I say something, they think I’m the bad guy. Listen, you’re going down at the Olympia bro.” Blessing said. “I’m going to whoop his ass bro, that’s what I’ve been saying.”

Before ending the discussion, Valliere compared Blessing’s trajectory to Andrew Jacked, who recently earned his pro card at the Arnold Classic Amateur a few months ago. Similar to Jacked, Iain believes Blessing needs to bring up a few lagging body parts.

” I have no doubt that me at my best can compete with anybody in the world. I think Blessing is on a track to be there, but I don’t think he’s there yet. I think he’s in a category with Andrew Jacked, where there is still gaps in his physique, that when he stands on stage with the best bodybuilders in the world, will be much more exposed.” Iain explained.

Valliere is leaving no stone unturned during his prep for this year’s Olympia. He trained alongside three-time Classic Physique Olympia winner Chris Bumstead, where he was pushed following an intense quad workout.

Meanwhile, this year, Awodibu has also approached training with a chip on his shoulder. Blessing Awodibu got busy exercising with bodybuilding veteran Kai Greene, when the two channeled ‘big boogie energy’ during a demanding arm workout to further build his mind-muscle connection.

After discussing size versus aesthetics, it appears Valliere and Awodibu are on a collision course for later this year. If their recent beef is any indication of the upcoming season, this year’s 2022 Mr. Olympia will be packed with surprises.