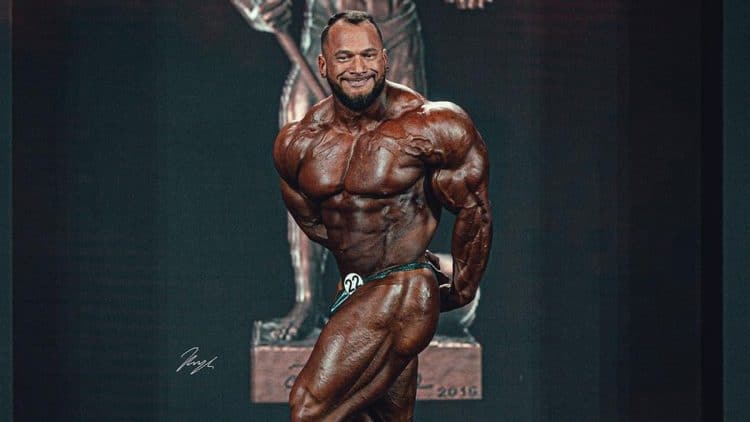 Men’s Open standout Hunter Labrada is coming off an uneventful performance at the 2022 Mr. Olympia, held Dec. 16-17 at the Planet Hollywood Resort & Casino in Las Vegas, Nevada. In a recent Instagram story, Labrada issued a statement after dropping down to seventh from fourth at last year’s 2021 Olympia.

Hunter, son of IFBB Hall of Famer Lee Labrada, first gained attention for his muscle size and symmetry after winning the 2020 Tampa Pro, ahead of Iain Valliere. He made his first Olympia appearance the same year and finished eighth.

He turned in a strong 2021 season, kicking things off with a dominant win at the Chicago Pro. He followed that up with an impressive second showing at the 2021 Mr. Olympia, where he battled it out with 2021 Arnold Classic champ Nick Walker to finish fourth. This performance marked the first time he cracked the top five at Olympia.

The rivalry between Walker and Labrada grew after last year’s Olympia outcome. Some members of the bodybuilding community gave their thoughts on the results like four-time Olympia Jay Cutler. He believes the judges gave Hunter fourth instead of Nick because of his ‘pretty’ shape.

Going into the Olympia contest, the Nick Walker vs. Hunter Labrada rivalry became one of the key talking points. ‘The Mutant’ was confident he would get his revenge if he brought better conditioning on stage. Bodybuilding icon Cutler and coach Milos Sarcev had doubts about Labrada’s chances at the show due to the rising crop of talent in the Open division.

Hunter was focused on dethroning two-time Mr. Olympia champion Mamdouh ‘Big Ramy’ Elssbiay and believed he could push the former champ with conditioning. He shared a shredded physique update just a week out of the 2022 Mr. Olympia, though in the end, didn’t defeat Ramy, who finished fifth, respectively.

In a recent story uploaded on his Instagram, Hunter Labrada issued a statement on dropping down to the seventh spot at the 2022 Mr. Olympia.

“Y’all want real, here’s real: I just walked in my gym for the first time since leaving home for the Olympia to change this timer and move some blood around,” he wrote in the photo. “I absolutely lost it when I thought about the last years worth of work that had been put in this room only to fall short of my expectations in a major way, and at the end of the day those are the only set of expectations that matter to me.

“This past weekend was the best I’ve ever been, but there are some things that need fixed, and somethings that need figured out, and that’s what this year will be about. Looking forward to really unpacking all this to y’all after the holidays, but for now it’s time for me to be with my family and to take care of myself. I will be back and better than ever in 2023, and y’all will see me twice! Once to qualify, and once in 316 days.”

Hadi Choopan  won his first Sandow trophy at the 2022 Mr. Olympia. Former 212 champion Derek Lunsford made a statement in his Open Olympia debut by finishing runner-up whereas Nick Walker leapfrogged into the top three with a significantly improved package. Walker also got awarded the Olympia People’s Champion for the first time.

Given Hunter’s comments, he plans to come back in 2023 better than ever. In the weeks to come, the Open class competitor will provide more details on why he was off at 2022 Olympia.