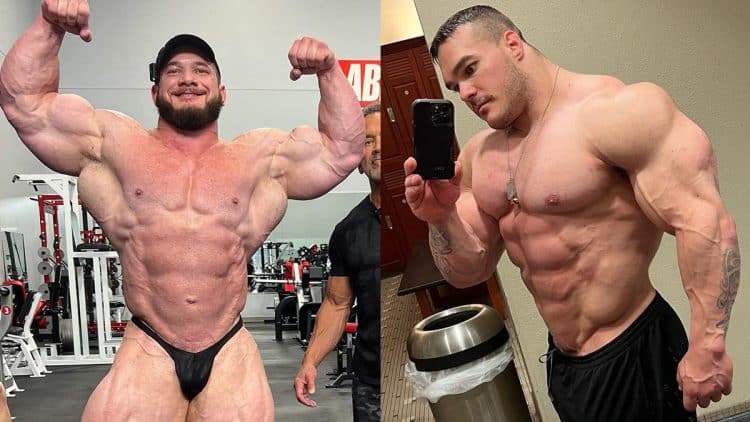 Nick Walker has ambitious plans for his current bodybuilding season. In a recent video, Walker predicted he’ll defeat rival Hunter Labrada with conditioning when the two meet on the 2022 Mr. Olympia stage this December.

“The Mutant” is in the midst of preparations for his second Mr. Olympia contest after a very successful 2021 campaign. It started with a victory at the 2021 New York Pro. Despite earning his Olympia qualification as a result of this victory, Walker made his way to Ohio to compete at the Arnold Classic just months later. He won the event in dominant fashion and defeated top-ten Olympia finisher Iain Valliere, who placed runner-up.

Walker’s first Mr. Olympia appearance saw him reach fifth place, an incredibly impressive feat for a debut performance. Though, if you ask Walker, he’d tell you he should have placed higher. Specifically, against his friendly rival, Hunter Labrada, who finished one spot above him in fourth place at last year’s marquee show.

According to Walker, he maintains that his overall package was better, even though judges and some in the community favored Labrada’s ‘pretty’ shape. Earlier this year, Walker and Labrada shared a brief training session, making it clear that they want to face each other at ‘100 percent.’

In addition, the 28-year-old tested his strength training with his competition, when he pumped iron with former Mr. Olympia Brandon Curry and Samson Dauda. With 2022 Olympia rapidly approaching, Walker discussed his upcoming showdown with Hunter Labrada.

Nick Walker on Hunter Labrada 2022 Olympia Battle: ‘It’s Going to Come Down to Who Is Most Conditioned’

In a recent video with Desktop Bodybuilding, Walker tackled a few topics including his rivalry with Labrada, Andrew Jacked’s potential, and his top five bodybuilders of all time.

Walker believes he’s made enough improvements to defeat Hunter Labrada at 2022 Mr. Olympia. Admittedly, “The Mutant” agrees Hunter has a better shape, but is confident he’ll defeat him with conditioning during their rematch.

Walker says pictures can be deceiving, and he’s glad to have coach Matt Jansen’s watchful eye around during contest prep.

The two split up back in February. Many believe supplement contract issues prompted the separation. However, others have suggested Walker wanted to compete this year instead of taking an off-season as Jansen requested. A few weeks ago, Jansen and Walker reunited to dominate at Olympia.

“Pictures can tell a whole different story,” said Nick Walker. “There’s always that little bit of difference in person that you wouldn’t see in a photo. I just feel like some of the lighting plays a role in all this. I know Matt [Jansen] has a great eye. I know he can see things clearly but in person is always better.”

Walker Doesn’t See Andrew Jacked as a Threat ‘This Year’

When discussing the potential of Andrew Jacked, Walker said he has some ‘big weaknesses.’ He added that he doesn’t see Jacked as a threat at this year’s Olympia.

“I think Andrew Jacked is a great bodybuilder. I think he has great shape. I would say, I haven’t seen him in person, Martin [Fitzwater] has. I think he also has big weaknesses. As strong as his strong points are, I don’t see him as a threat to me this year, no.”

Top 5 Bodybuilders of All Time?

Walker was asked about his top five favorite bodybuilders of all time. His list featured a number of Olympia champions, as well as Flex Wheeler and Kevin Levrone.

When he’s not featured on podcasts, Walker is dedicating his efforts solely to improving his physique. One of his recent training sessions highlighted his strength, as he demolished a massive deadlift for reps. Walker also shared a brutal chest and arms workout, where he taxed the upper body with nine different exercises.

Dethroning the two-time reigning Mr. Olympia Mamdouh ‘Big Ramy’ Elssbiay will be no easy task. With eight weeks until 2022 Olympia, Walker’s efforts are ramping up to bring his best package to date.