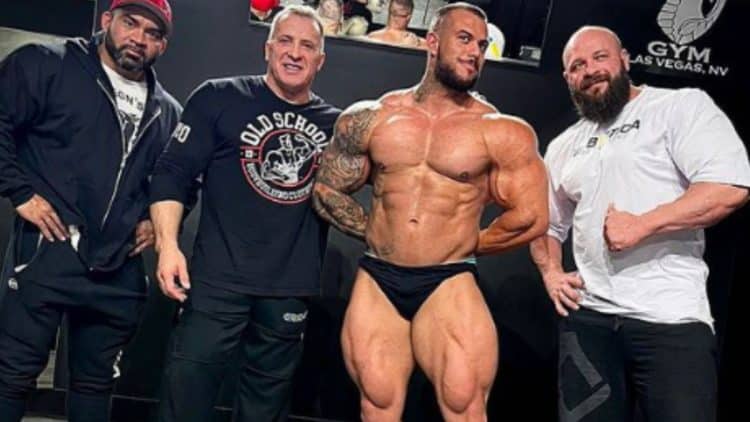 Coach Milos Sarcev is a busy man but is carving out time to help train another rising bodybuilder. In a recent Instagram post, Marcello De Angelis revealed he will be coached by Milos Sarcev in preparation for his IFBB Men’s Open bodybuilding debut.

De Angelis has been on a mission since earning his IFBB pro card last year at the 2021 Expo Super Show. Well known as Horse M.D., his initial plan was to make a statement in the Classic Physique category. However, fans were left unsure which division he would commit to since he earned his pro card as an Open athlete.

While he was on track for success at the 2022 Expo Super Show, disaster struck, and Marcello was hospitalized with a virus before the event. He recounted the harrowing experience and shared that he lost nine kilograms (19.8 pounds) while sick. To aid his excessive dehydration, medical professionals treated him with a Saline drip.

Even though he made it to the Expo Super show in Brazil a few months ago, De Angelis was unable to achieve the weight limit for his height. Shortly thereafter, he was disqualified from the event.

De Angelis wasn’t the only Brazilian bodybuilder to struggle with the weight/height cap this year. At last weekend’s 2022 Olympia contest, Ramon Rocha Queiroz allegedly missed weight by four pounds. At the time, his spot on the Classic Physique stage was in jeopardy. However, he eventually made weight for his height cap and was eligible to compete.

Another competitor to take issue with the Classic Physique weight/height cap was two-time Classic Physique Olympia winner Breon Ansley. ‘The Black Swan’ made it clear win or lose at 2022 Olympia that he was switching to Men’s 212 Bodybuilding. He finished fourth and intends to try out the new division next year.

In light of the difficulties, De Angelis announced on July 1 that he was moving into Open bodybuilding. To facilitate his switch, Marcello has joined forces with Milos Sarcev.

On Thursday, December 22, Milos Sarcev revealed that he will be training Marcello De Angelis moving forward.

“Revealed current physique that will be prepared by the living legend of bodybuilding Milos.

✅ The video was recorded on December 12, when he was in Las Vegas and took advantage of the opportunity to be with his new coach in person. Received great praise, commented that this friendship had begun a few years ago and now intends to take our Brazilian’s physique to another level.

📌 Currently preparing names such as @regangrimes , @samson__dauda and the highlight of the moment @ifbbpro_behrooztabani , it is notable that most of its athletes work in a way that maintains their lines, but can develop quickly.

📌 I believe that the first steps will be to make a good off-season, to make the necessary improvements, to make your Pro Debut and surprise. He will be another aesthetic athlete at the Open and knowing his genetics in no time we will see him at Mr Olympia.

What do you think of Horse’s current physique? Do you think it will evolve with Milos? Comment with respect ⬇️” Marcello De Angelis and Sarcev shared.

While competing in bodybuilding, De Angelis became a Mr. Universe champion, Panamericano champion, a two-time Sulamericano winner, a four-time Brasileiro overall champion, and a two-time Paulista winner. He boasts aesthetics and a slim waist, which many believe would give a lot of top names in the Open trouble today.

Milos Sarcev has a wealth of experience training bodybuilders at the highest level. Throughout his tenure as a coach, Sarcev has helped shape legends of the sport such as four-time Arnold Classic winner Flex Wheeler, Dennis Wolf, Ben Pakulski, and as of late, active athletes like Samson Dauda and Canada’s Regan Grimes.

RELATED: Milos Sarcev On Samson Dauda’s 6th Place Finish at 2022 Olympia: ‘He Should Have Beat Nick Walker for 3rd Place’

The last time fans heard from Marcello; he promised the best has yet to come. With a decorated coach like Milos Sarcev guiding him through the season, many fans see De Angelis doing some damage in the Men’s Open division next year.