Hunter Labrada and Iain Valliere are shredding down for their upcoming appearances at 2022 Mr. Olympia. 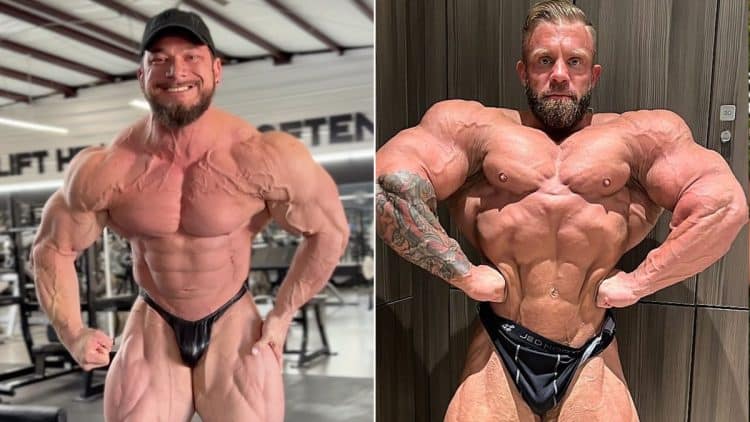 Two of the IFBB’s best Men’s Open bodybuilders are closing in on preparations for 2022 Mr. Olympia. With one week until the contest, Hunter Labrada and Iain Valliere shared shredded physique updates.

Hunter, son of IFBB Hall of Famer Lee Labrada, plans to make a statement at his next Mr. Olympia competition. Last year, Labrada started off hot with a dominant win at the 2021 Chicago Pro, where he dispatched contenders Brett Wilkin and Maxx Charles. Unlike many of the mass monsters in the Open, Hunter has received notoriety for his ability to blend his size with aesthetics.

At 2021 Mr. Olympia, he went head-to-head with Arnold Classic champ Nick Walker. By the end of the contest, Hunter finished fourth, with ‘The Mutant’ trailing behind him in fifth. In the aftermath, some took issue with the outcome, including Nick Walker, who mentioned that he had the ‘more complete’ package. According to bodybuilding legend Jay Cutler, the judges sided with Hunter over Nick because of his ‘pretty’ structure and shape.

They will ultimately rematch on the Olympia stage in one week. Throughout the season, both have mentioned that they would like nothing more than to face each other at 100 percent. However, Hunter and Nick will also have a number of other contenders to deal with, one of which is Canada’s Iain Valliere.

Valliere competed at four IFBB contests last year. He won back-to-back titles at the 2021 Tampa and Texas Pro. After placing runner-up to Walker at the Arnold Classic, Valliere brought one of his best looks to Olympia where he managed to finish seventh.

In July, Valliere clinched his invitation to 2022 Mr. Olympia by winning the Vancouver Pro, where he surpassed Antoine Vaillant on the scorecards. Valliere and Labrada are eager to improve from last year. Instead of keeping fans in suspense, they both offered physique updates one week from taking to the stage.

“Lowest weight of the entire prep this morning (257lbs)👊🏻
–
Time to fly to Vegas tomorrow and start to dry it out and fill it up!
–
Better than I’ve ever been by a long shot if we just slapped tan on, can’t wait to see the final product 6 days from now🙌🏻” Hunter Labrada shared.

In addition to several intense training sessions, Hunter Labrada has been open about his ambitions for the current season. Earlier this week, he spoke with retired pro Dave Palumbo about what he expects from this year’s 2022 Olympia show.

Even though the reigning two-time champion Mamdouh ‘Big Ramy’ Elssbiay is a massive favorite to win, Hunter specified that he’s made the necessary improvements to stand against him. Moreover, Hunter promised the best conditioning of his career.

Check out the latest from Iain Valliere’s Instagram below:

Bodybuilders were quick to take notice of Valliere’s update. In fact, the reigning champion even gave the 2021 Olympia contender some props.

Many fans are excited to see Iain back on the Olympia stage, especially since he’s been involved in a few bodybuilding rivalries as of late. Blessing Awodibu, who is also headed to Las Vegas for 2022 Olympia, went back and forth with Valliere a few months ago about why shape should be valued over aesthetics on the Olympia stage.

Valliere will also face Michal Krizo, a bodybuilder from Slovakia that quickly earned his pro card and Olympia qualification back in October. Krizo recently shared a physique update, and he too looks to be shredding down as the Olympia show draws closer. They took shots at each other in November but will settle the score next week.

Big Ramy has admitted in the past that conditioning was his only weakness. Labrada and Valliere plan to expose that flaw when they battle on stage next week at the 2022 Mr. Olympia contest.