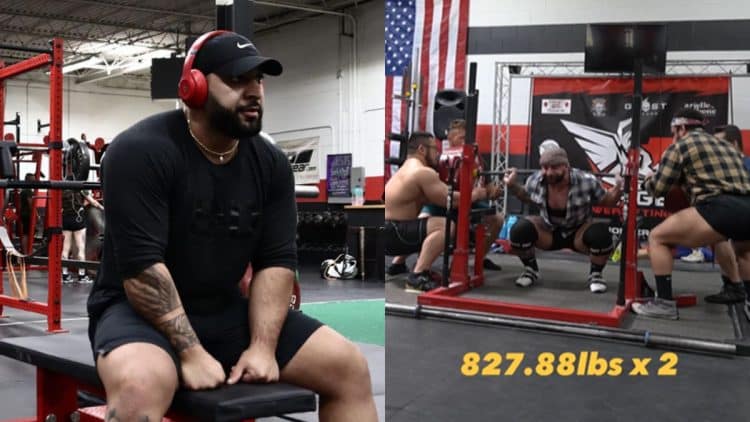 Some time ago, Husam Ateyia revealed he has some big goals and aspirations for this year. He wants to set new Total and Squat World Records in the 110-kilogram (242.5-pound) weight class the next time he competes. While many people were skeptical when Husam said that, he now has new training footage that looks promising. Most notably, Husam’s squat is becoming absolutely frightening, as he recently scored a new 375-kilogram (827-pound) two-rep PR.

Before coming up to the bar, Husam performed his trademark dancing routine. He then performed two reps quite comfortably before his emotions got the best of him. It was initially a burst of extreme energy, followed by Husam wiping his eyes a bit later. Husam Ateyia used a lifting belt and knee sleeves for his squat double PR, which means that it is raw by powerlifting standards.

Kevin Oak holds the current raw Squat World Record in the 110-kilogram weight class, having lifted 390 kilograms (859.8 pounds) at the 2020 WRPF Hybrid Showdown II. Considering that Husam Ateyia is going to compete sometime in October, he still has a little more time to improve his squat so that he can break the record.

Apart from the squat, Husam Ateyia also expressed his desire for the raw U110KG Total World Record. Jamal Browner holds that record, as he totaled 1,000 kilograms (2,204.6 pounds) at the 2021 WRPF Hybrid Showdown III. However, Husam went with a bold prediction, having stated that he wanted to total 2,300 pounds (1,043.3 kilograms) in October. He revealed all of this on “Those Other Guys” podcast in May.

Everything hints toward Husam Ateyia becoming the next star of powerlifting. He is still very early in his career, having competed professionally only four times. Of those four, Husam came out victorious three times. His performance is improving with every competition, and it appears that this trend will continue in October.

The 110-kilogram weight class of powerlifting is becoming absolutely stacked. We now have Husam Ateyia quickly catching up with many incredible athletes, and he will look to make a statement in October. Jamal Browner, Kevin Oak, and Phillip Herndon, on the other hand, have already claimed World Records. However, Husam could become the first athlete in this division to squat 400 kilograms (881.8 pounds) raw, cementing his place among the greatest in history.