Inside the early life and career of Instagram superstar Jena Frumes. 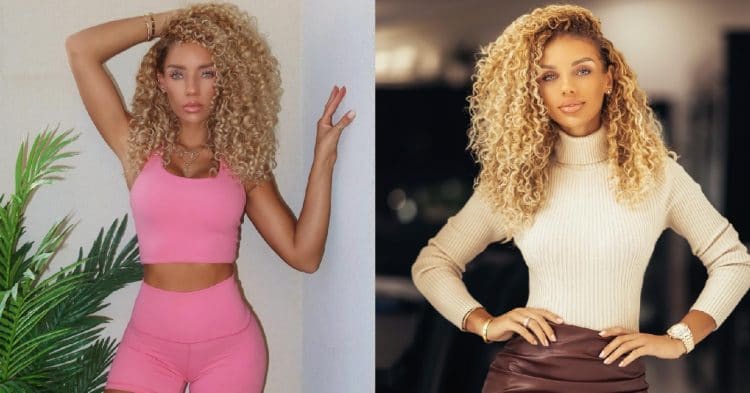 Born in Union Beach, New Jersey, Jena Frumes is an Instagram superstar with a following of millions. Her Instagram bio says that she “lives life for a living,” and she’s clearly doing something right. At the sweet age of 27, Jena Frumes has put herself on the map as a self-made model with an immeasurable amount of secret admirers.

Here are all of Jena’s secrets that she’s willing to share….

Who would have thought that Jena Frumes from Union Beach, New Jersey, would wake up one day an Instagram superstar with over four million followers? She did. Hailing from New Jersey, Jena spent a quiet early life knowing there was something bigger out there for her. And she found it, on her own.

Jena lived with both her parents and one younger sister from the time she was born until high school finished. Her stunning features and exquisite looks are the product of African, French, and Native American descent.

Jena enjoyed a fairly traditional childhood, she loved to be outdoors and she loved to dance. These were easy joys to foster living in Union Beach.

Enjoying all of these past-times led to a desire to eat healthy and live a fit life.

And so she did! It would later lead to a modeling career that had humans all over the world craving her next look.

After high school, Jena attended college in North Carolina. Hard to believe that was only a few short years ago for her. While she was in college she knew that modeling was something she was really interested in. It wasn’t just modelling either. She wanted to be involved in the field of entertainment at every level. It was not long before the City of Angels called her, and Jena landed in Los Angeles to have her picture taken for a living. She wanted to be able to have access to the best jobs, and so off to Los Angeles she went.

At first, Jena’s parents weren’t thrilled about this choice, but it wouldn’t take long for her to convince them that she was able to make it on her own there.

Related: How to Lose Fat Without Losing Muscle

Jena had her sights set on Hollywood and has an intuitive interest on what jobs would lead to success for her, and also enjoyment. She wants to love what she does.

One of Jena’s first gigs was with MTV’s “Wild ‘N Out.” It wouldn’t be long after that before the followers began flocking to Jena Frumes. Jena loved finding a personal touch between her professional life and the world of social media. The MTV spot was the perfect opportunity for her to be seen by top major recording artists, and video appearances were next on her resume.

The Instagram followers soon came after. For Jena Frumes, Instagram success was not just about showing off some head shots and modelling shoots. It also became a chance for her to help other women become healthier, and prouder of their own images.

Jena Frumes’ Instagram soon garnered international attention. The photos she puts up are everything from candid shots with her dog, to workout videos with her boyfriend, and some modeling profiles. It’s also led to paid partnerships with companies such as Pretty Little Thing and other luxury clothing brands.

After “Wild ‘N Out” with MTV she became more known on the up and coming scene, and was featured in a video for John Latimore’s “Ah Yeah.” Following that, Jena Frumes became more involved with sharing her fitness regime which can be seen in spurts on Instagram.

After MTV, more TV and music shots kept coming for Jena Frumes. She has worked with Chris Brown which helped with her Instagram following. By the time she turned 24 she had over 1.5 million followers.

Today, she has over 4 million.

Just this year she signed a five-figure deal with Pretty Little Things. This is a luxury clothing brand that offers pieces from swimwear to office casual.

Jena Frumes looks stunning in everything.

Jena doesn’t get too specific with many of her workouts, as far as revealing too much of what she does. But it’s clear she takes very good care of herself.

Fans might see Jena and her boyfriend working out on occasion, or on the way to a local gym during the pandemic. She has a total body routine that includes abs, glutes, and likely includes both weight and cardio training in her program. That routine includes everything from doing cartwheels in L.A. to kick boxing for fun.

Jena’s workout videos online showcase a wide range of activities she does to stay in shape. And she’s not afraid to ask her fans for some tips either.

Jena Frumes doesn’t follow a strict program, but does just like to eat healthy. She likes to stay nutritious and focuses on fresh fruits and vegetables. Jena Frumes is also known to do a lot of her own cooking at home.

But of course, she is human, and likes a good piece of pizza or some donuts once in a while when she isn’t gearing up for a big photo shoot.

As far as Jena Frumes’ personal life is concerned, she definitely has a man by her side. She has been linked with a few celebrities, but has spent time with musician Jason Derulo for the better part of the year.

He has her back, and you can see the trust between them in their workout videos, when he nearly suspends Jena in air for an air-push-up.

The couple hadn’t been together for too long by the time the lockdown began, and when it did, they hunkered down in his mansion to get through it. Friends describe them both as outgoing, spontaneous, and lively, and call them a good match.

One report on the pair said the following,

“Jason and Jena hadn’t been together too long before the lockdown started but they decided to take the plunge – and they are loving it.

They’re both outgoing, lively and spontaneous, so they’re a really good match.

For a while, Jason didn’t want to be stuck down in a relationship, especially when performing around the world. But this just felt right and he is seeing what happens. It’s all going well so far and they have formed a really good connection.”

Derulo’s Tik Tok is filled with videos of how proud he is of her, and he’s racking up more than a billion views monthly on Tik Tok. The pair met at a gym and have been inseparable since.

The two share the same birthday even on September 21, and it’s easy to see why they get along so well. Jason was born in 1989, making him a few years older than Jena. She is 27 this year and he has just turned 31.

Jason Derulo recently appeared on Ellen and got right down to business about his relationship with Jena Frumes. He told the quippy talk-show host that a pandemic can either speed up a relationship or speed up a breakup. For him and Jena, it sped up the relationship.

He described his time with Jena as amazing, gushing about having the best girlfriend in the world. And to some of his Tik Tok fans, he may be thinking about locking down with her forever.

A recent Tik Tok video of Jason Derulo and his four-year-old niece led to some baby fever suggestions.  He suggested me “may be getting to that age.”

What’s next for Jena Frumes? Getting through the pandemic with her man and her dog Yoda, and she’s also looking to get into more lifestyle videos on YouTube.