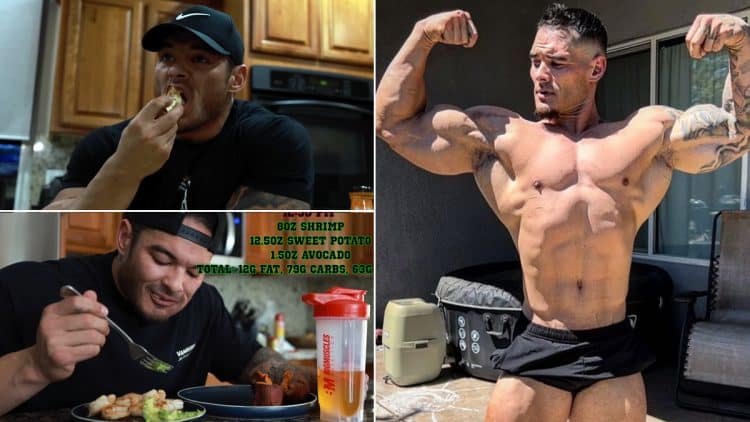 Bodybuilder Jeremy Buendia is working hard to pack on the pounds while away from competition. In a recent video posted on his YouTube channel, he shared the full bulking diet he implements during the off-season.

Buendia had an impressive run in the Men’s Physique division, becoming the Olympia champion from 2014-2018. His 3D delts and filled-out chest muscles made him stand out from his opponents. He stepped away from competing for a while after he was defeated at the 2018 Mr. Olympia. Brandon Hendrickson took home the title and Buendia was placed fourth, behind Ryan Terry, Raymond Edmonds, and Hendrickson.

He had previously announced that he would make his comeback soon, reporting that he wanted to bulk up to 220 pounds and return looking the best and biggest he has ever been.

In a recent video uploaded on his YouTube channel, Buendia shared his diet in the off-season ahead of his highly-anticipated return to competition.

“I’m doing seven meals per day, not all of them are like chicken and rice. I have shakes for a few meals it’s like 4600 calories, 40 plus grams of protein, 40 plus grams of carbs and I think around 70 grams of fat. I try to stay as close as I can in my diet but like we are in the off season now so I’ll give myself a little leeway to have a variety of foods.”

Jeremy Buendia started with the first meal of the day.

“Breakfast is the same. I’ve seen just about 70 grams of oats to start the morning off. Breakfast is actually probably my easiest meal and probably my smallest meal surprisingly.”

“I’m not using too much oil but I do use oils, olive oil and it’s with my chicken or my meat when I’m putting on sauce. I need those extra calories using olive oil is a great way of doing that.

For you hard gainers out there, put some olive oil in your food if you guys try to get some extra calories. One cup of liquid egg whites or eight egg whites. One tablespoon of peanut butter right in the oats. Last half of the blueberries, it’s a lot easier to get down. Breakfast is served.”

He talked about a saying his friend told him that he uses for inspiration.

“I remember him saying like ‘don’t be a bi*ch when it comes to your food.’ That’s pretty much what it comes down to. Are you gonna be a bi*ch and not eat or are you going to man up and eat your food.”

Next, he shared his meal two through five and included his intra-workout.

“Meal two is, I said one was the easiest meal I like. Second meal is the easiest meal, I’m getting all these calories in. My coach has been helping my by supplementing protein and carbohydrate powder as well to help me get my macros.

When it comes to getting calories in, Jeremy likes to have up to seven meals a day.

“Eating seven meals a day of just meat and whole food carbs so this definitely helps a lot with getting the calories in. I’m gonna do two scoops of Big Muscle whey isolate (56 grams of protein). We’re gonna do one scoop of Carbol in it, which is 50 grams of carbs.”

“We’re doing 12 ounces of sweet potato like 80 grams of carbohydrates. This could be an alternate for a different carbohydrate source, white rice, I can do red potato or pasta in my off-season.”

“Eight ounces (of shrimp). Usually I do like half an avocado. We’re looking at probably a little over an ounce of avocado right here. I usually shoot for like two and a half ounces but this will be all right for today.”

Related: Bulking Meal Plan To Fill Out Your Sleeves and Turn Heads

“Meal 5, we are having another clean lean protein and clean carbs, we’re going to be shooting for roughly eight ounces or about 50 to 60 grams of protein. We’re also shooting for 90 to 100 grams of carbs. We’re going to do white rice here. I do poke for meal five. This is eight ounces of Ahi tuna with some onion, cucumber, avocado and lastly, some condiments, we use this deep roasted sesame.”

Meal six was not as clean as he feasted on a beef quesadilla.

“Meal six, I’m going to have something a little bit dirtier. I’m going to do a beef quesadilla with low fat cheese and six ounces of 90 percent lean ground beef. Total fat 38 grams, I’m having five ounces of sweet potato also to hit my macros and my carbs, I’ll put about 104 grams of carbs and 74 grams of protein total.”

He also had some veggie juice before meal seven.

He explained that this diet has already helped him gain 19 pounds in just two weeks.

Men’s Physique standout Erin Banks got into a beef with Jeremy Buendia earlier this month when he labeled him ‘irrelevant’ in the sport. Buendia fired back at Banks for his comments, saying, ‘you got a lot to accomplish before you talk the way you’re talking.’ Should Jeremy eventually return to the Olympia stage, he’ll have a rivalry waiting for him.