Jeremy Buendia believes Erin Banks might be too confident ahead of 2022 Olympia: 'you got a lot to accomplish before you talk the way you're talking' 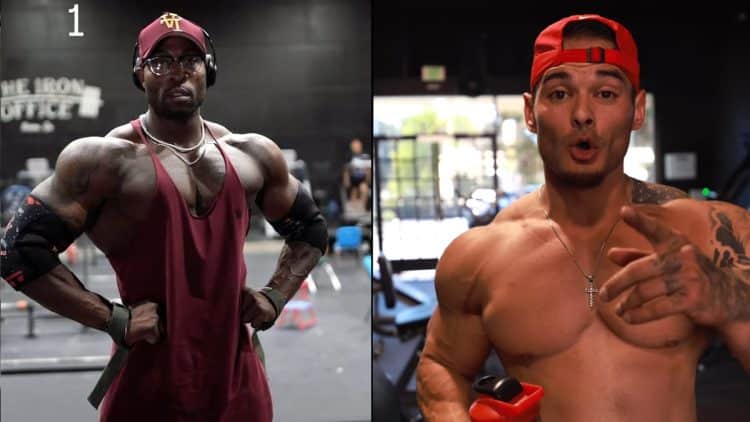 This year’s season of bodybuilding is in full swing, and Men’s Physique competitors like Erin Banks are preparing for 2022 Mr. Olympia. In a recent video shared on YouTube, a beef started between Erin Banks and four-time Men’s Physique Olympia champion Jeremy Buendia.

The 2022 Mr. Olympia contest is scheduled to take place from December 15th – 18th in Las Vegas, Nevada. With less than 14 weeks until the biggest bodybuilding show of the year, a slew of Men’s Physique competitors sat down to discuss how they believe they will perform at this year’s contest.

One competitor that joined the discussion was four-time Men’s Physique Olympia winner Jeremy Buendia. From 2014 to 2017, Buendia was crowned champion at the prestigious event in the Men’s Physique category. The following year, he returned to the 2018 Olympia stage, but finished the show in fourth place — with champion Brandon Hendrickson claiming victory.

While Buendia hinted at a possible comeback in 2020, it never happened. In April, he signaled interest in preparing his frame for Classic Physique. Despite that, he made headlines recently after announcing a planned return to Men’s Physique.

Earlier this month, Jeremy made it clear that he was building muscle and planned to bring his “biggest and best” package to his next competition. While he wouldn’t confirm which show he was bulking up for, he did hint that he’s eying the 2023 Mr. Olympia stage.

One Men’s Physique standout that rose in popularity in Jeremy’s absence was Erin Banks. He was runner-up to champion Brandon Hendrickson at last year’s Olympia contest. Undeterred by the result, he improved and won back-to-back titles at the 2022 Arnold Classic and the Boston Pro. Looking ahead to 2022 Olympia, Banks and Buendia sparked up a fiery discussion.

During a recent video, Buendia said Erin Banks will have to battle with competitors like Kryon Holden, Diogo Montenegro, and reigning Men’s Physique Olympia Brandon Hendrickson at this year’s contest.

“Erin [Banks] is so confident going in, as he should be, he’s a great competitor, but you got Kyron [Holden] and Diogo [Montenegro] that are right there with you guys. It’s not like any of you guys are that much better than anybody because you guys are all really close. It’s a matter of who shows up,” Jeremy Buendia explained.

Before Buendia could finish his statement, Erin Banks interjected:

Buendia doesn’t believe the Arnold and Boston Pro are as competitive as Olympia.

“Dude, the Arnold isn’t Olympia bro. You don’t have even have the best guys on the stage,” Jeremy retorted. “You got a lot of things to accomplish before you talk the way you’re talking. That’s why I don’t follow you.”

In response to Jeremy, Erin told him he’s “irrelevant” in the sport and trying to sell fans a fairy tale with his talks of coming back.

Defending Men’s Physique Olympia champion Brandon Hendrickson told Erin that he needs to have respect for what Buendia accomplished during his reign.

According to Jeremy, Erin Banks has ‘always’ discounted his accomplishments in the sport of bodybuilding.

“How? I don’t care about what you’ve done. I respect the title. I’m not saying I disrespect him as a man. You’re not going to tell me who is better,” says Erin Banks.

Buendia circled back to Diogo Montenegro being a major threat at this year’s Olympia contest due to his size, but Erin doesn’t believe that will be an issue.

“I know where your mind is at Erin. You have every right to want the title like everybody else. But I’m just saying, Diogo added a lot of size.”

“It is for Diogo [Montenegro],” says Buendia.

After a brief argument, Buendia told Erin that if he doesn’t bring meaningful improvements to the Olympia stage, he will be defeated by Hendrickson or Montenegro.

“If Diogo makes the improvements, he needs to make this year, I think he’s coming with a much different package than everyone else on this stage. Brandon’s been winning from year-to-year — he doesn’t got to make many changes — he’s the champ,” Buendia stated. “What are you doing to make yourself better because you didn’t beat him last year.

Jeremy Buendia to Erin Banks: ‘You Got to Respect the People at This Table’

Jeremy understands why Erin is confident but said he needs to respect the other Men’s Physique contenders who have put the work in.

“I’m not saying that bro. I’m trying to say I haven’t [seen you in person], social media is different. I’m not coming at you sideways in any way bro. You gotta give respect to the people sitting here because everyone deserves a spot at this table,” Buendia told Erin.

Before ending the discussion, Erin Banks shared that his physique is already good enough to bring to the Olympia stage.

“Yes. From talking to Steve, Sandy, and Tyler — any big-time judge, that’s all I need. [What I brought in] Boston. But going into this Olympia, we’ve already improved the chest more,” says Erin Banks.

It remains unclear if/when Jeremy Buendia could make his return to a show. If he made a comeback, there are a number of elite-level Men’s Physique competitors that he would be challenged with facing, most of which were featured in this video.

Fans are in for an intense showdown at this year’s Olympia contest. With Buendia announcing his comeback, perhaps he will get the chance to battle Erin Banks in due time.