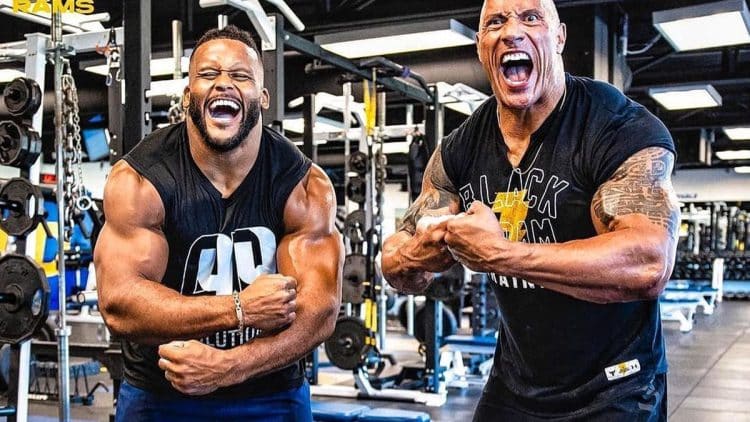 Dwayne ‘The Rock’ Johnson is easily one of the most successful actors on the planet. He made a name for himself for his unreal dedication to keeping his fitness levels high, which ultimately made him very recognizable on the TV screens. He is also not one to shy away from a challenge. In a recent post made on his Instagram, Johnson crushed split stance one arm dumbbell rows with NFL player Aaron Donald.

Johnson first gained notoriety during his pro wrestling days as one of the biggest stars in the WWE. The ‘Attitude Era’ pioneer moved on from the wrestling ring to step into the world of acting. A man of many talents, he quickly found success in his new venture and became a Hollywood star.

The Rock was the highest-paid actor of 2020 for the second time in a row and chances are he could have bagged a third first-place finish if the industry wasn’t shut down from the pandemic.

He is renowned for his mindset of being the ‘hardest worker in the room.’ He boasts a jacked physique and is also one of the most consistent celebrities when it comes to staying in shape. For his titular role in the upcoming DC movie Black Adam, Johnson took his physique to the next level by packing on the pounds to bring the comic book superhero to real life on screen.

The Rock shared a grueling quad workout that he used to condition his legs in preparation for the role. He showed off his lower body gains after performing some step-up exercises.

In a recent post uploaded to Instagram, The Rock performs a brutal warm-up to kick off his workout with NFL player Aaron Donald. In this clip, the pair performing split-stance dumbbell rows in unison to target their backs and biceps.

The exercise involves a 100-pound dumbbell, 20 reps at a time, then swapping arms until each arm has completed 40 reps three times.

For the record, these were the opening supersets that brotha AD wanted to START our workout with

And I thought I was f’n crazy”

The Rock and Aaron Donald appear to have good chemistry as they continue joining forces for tough workouts. They had previously teamed up last month when they reminisced about their upbringing and got a challenging workout at the LA Rams gym.

Split stance dumbbell rows are a very effective free-weight exercise and can be done with a single dumbbell. Mostly the mid-back and lats are targeted in this exercise, but the shoulders, biceps, and lower back also help. This pulling exercise can build strength and give you a wider back.

Dwayne Johnson likes to reward himself after following a strict diet and workout plan. He is equally as famous for his epic cheat meals, where he devours massive proportions of some of his favorite foods. The Rock recently added a ‘cheat meal for the history books‘ when he consumed In-N-Out for the first time and also shared a monstrous post-workout cheat meal for breakfast.