Buendia laid out the framework for defeating reigning Men's Physique Olympia Erin Banks at the 2023 Olympia contest in November. 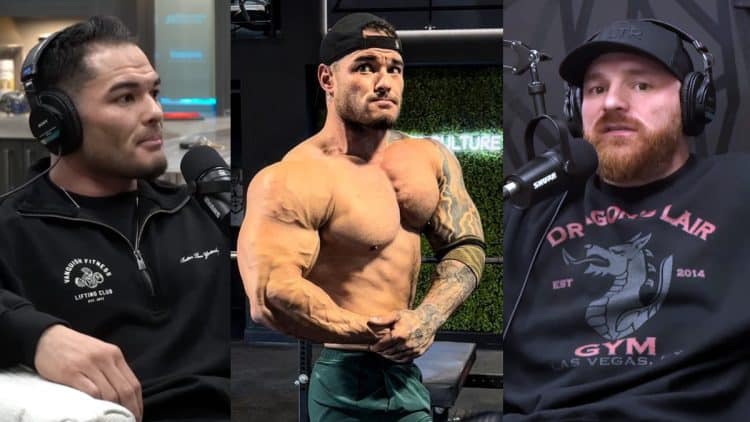 Jeremy Buendia is on the verge of making his bodybuilding comeback. Speaking with Flex Lewis, Buendia discussed the evolution of the Men’s Physique category and laid out how he plans to dethrone the reigning champion Erin Banks at 2023 Olympia.

From 2014 to 2017, Jeremy won the Men’s Physique title at Mr. Olympia, and currently holds the most Olympia victories of anyone in that division. During his successful reign, Buendia set the standard for the category, however, he was unable to defend his throne after vying for a fifth title in 2018.

Instead of Jeremy being crowned the winner, Brandon Hendrickson took the honor and replicated that success on the Olympia stage in 2020 and 2021. Before the 2022 Olympia competition took place last December, Buendia announced he would return to the sport in 2023. With plans of bringing his ‘biggest and best’ ever, Buendia told fans he was bulking up to 220 pounds before rebuilding his physique.

Jeremy and Erin Banks got into a heated argument back in September. At the time, Banks had yet to earn his first Olympia title. After calling Buendia ‘irrelevant,’ Jeremy told Banks that he lacked respect, especially for those who have accomplished more than him in the Men’s Physique division.

Looking ahead, Buendia joined Flex Lewis for a candid conversation regarding his 2023 comeback and how he intends to defeat the new champ, Erin Banks.

Jeremy acknowledged that Erin Banks’ height could give him problems on the Olympia stage and offered his opinion on the current Men’s Physique landscape.

“There’s a lot of really good young athletes, a lot of rookies, that could shake up the Men’s Physique Olympia. There’s so many – there’s like 70 plus guys. I don’t know all their names, but there are a lot of rookies coming in who can crack the top 10.”

In order to defeat Erin Banks, Jeremy believes it will take ‘the right amount of size’ with near perfect conditioning.

“As I’m getting bigger and more muscular, I’m starting to notice — you can see it. I posted a back shot the other day on my Instagram, and you can see the little dip in my back, that’s because there’s scar tissue, there’s no muscle tissue there.

I’m going to have to come with a flawless package to beat the top guys next year. I’m going to have to come in with the right amount of size, perfect conditioning. I gotta adjust my posing to hide some of the flaws that I have. It’s going to be a lot more difficult to get the title back than it was for me to originally get it. There’s a lot of pressure and expectations for me to be on that stage and what I’m supposed to look like,” says Jeremy Buendia.

Buendia on ‘Completely Evolved’ Men’s Physique Division: All You Can Do Is Get Bigger, ‘That’s The Direction’ Now

The four-time Men’s Physique Olympia said the division has changed since he won his first title at 163 pounds.

“There’s a lot of pressure leading up [to an Olympia show] but I think I fed off of it a lot. I liked the attention. I liked having the eyes on me at the time, it was exciting, it was a lot of fun. The evolution of the sport is crazy for the Men’s Physique division. The first Olympia I won I was 163 pounds. The last Olympia I competed in I was 183.

My heaviest off-season was 190 back then, my off-season right now is 210, I’m going to try to get it to 220. Yeah, so it’s just completely evolved. Brandon [Hendrickson] beat me in 2018,” says Buendia. “The division has grown and grown and grown. For us Physique guys, how are you supposed to really improve your physique — you can just get bigger. There’s not much else you can do, so that’s the direction it’s gone.”

According to Buendia, Men’s Physique competitors continue to grow and would struggle with a weight/height cap similar to what is used in the Classic Physique division. Jeremy specified that if he tried out Classic Physique, he would have to weigh in at approximately 181 pounds.

The newly crowned Men’s Physique Olympia Erin Banks recapped his winning performance a few weeks ago. Despite rumors about Jeremy’s return, Banks believes the division has moved on without him. Banks added that he would be defending his Arnold Classic title in March.

The 2023 Mr. Olympia contest is scheduled to return in the first week of November. While Banks attempts to win a second Arnold Classic title in Ohio, Buendia will continue bulking up for his eventual return.

Why and How: Proper Plank Form