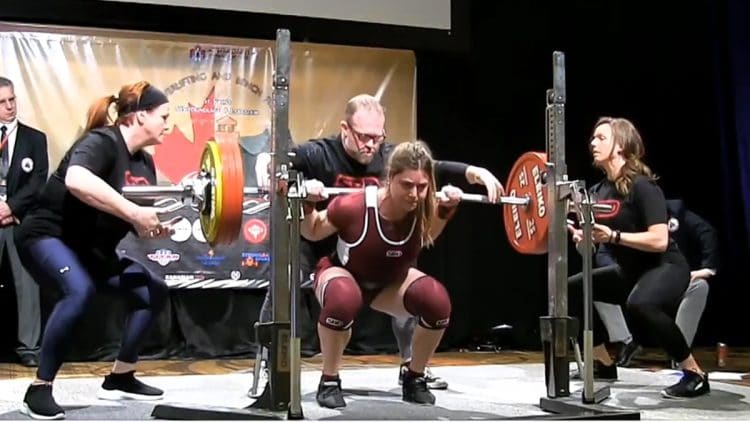 The 2022 CPU Canadian Nationals are a five-day powerlifting competition taking place from May 9-14, 2022, in St. Johns. Numerous elite powerlifters took part in the contest, but the 2021 IPF World Champion, Jessica Buettner, stole the spotlight with a brilliant performance. Not only did she win the raw 76-kilogram weight class, but also scored four National and three Unofficial IPF World Raw Records in the same weight class.

Jessica Buettner commenced her record-breaking performance with a huge 217.5-kilogram (479.5-pound) squat. With this lift, Jessica claimed the official Canadian and Unofficial IPF World Raw Records, as she lifted 7 kilograms (15.4 pounds) more than the previous records. Both records were/are in her possession beforehand, as Jessica set them at the 2021 IPF World Classic Powerlifting Championships.

To wrap up her incredible performance, Jessica Buettner deadlifted 252.5 kilograms (556.7 pounds). This lift is once again the official Canadian and Unofficial IPF World Raw Records. Both records were/are in her possession beforehand, as Jessica set them at the 2021 IPF World Classic Powerlifting Championships.

You can watch the deadlift here:

With at least one record in every event, Jessica Buettner also claimed the official Canadian and Unofficial IPF World Record Raw Total of 577.5 kilograms (1,273.2 pounds).

Jessica Buettner weighed in at 75.4 kilograms (166.2 pounds), and won the 76-kilogram weight class with ease. She outperformed the second-place finisher with a 110-kilogram (242.5-pound) difference. Jessica also claimed new Competition PRs in all four events.

Courtesy of Alpowerliftingtv YouTube channel. You can watch all of Jessica Buettner’s lifts here:

Related: Jessica Buettner Tells What It Takes To Be An Elite Powerlifter With Type 1 Diabetes (Exclusive)

The 2022 CPU Canadian Nationals was Jessica Buettner’s 18th sanctioned competition. She has won 16 of them, and is currently on a four-competition win streak. The next step for Jessica is defending her IPF title. She will get the chance to do so at the 2022 IPF World Classic Powerlifting Championships, which will go down from June 6-12, 2022, in Sun City, South Africa. Judging by her recent performance, Jessica will also set some new World Records.