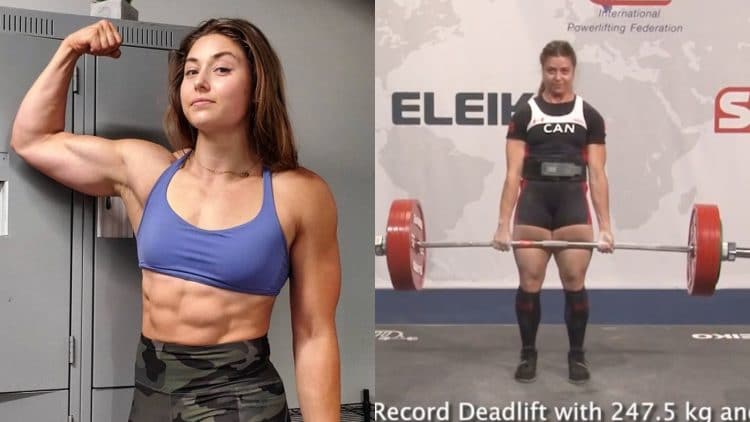 The 2021 IPF World Classic Powerlifting Championships have delivered yet another spew of new world records. Canadian powerlifter Jessica Buettner has scored herself a trio of world records in the 76kg division.

Buettner has been considered a top tier powerlifting talent for some time. Each time that she competes she makes big improvements, and she seems to be continuing on this path after her most recent appearance, in her first competition in a year and a half.

It is clear that Jessica spent her time off improving, even if you have not been paying attention to the incredible work she has been doing in training. She recently appeared at the 2021 IPF World Classic Powerlifting Championship, alongside the likes of Lya Bavoil, Russel Orhii, and more, and like those two, she walked away with a whopping three raw world records.

Here are the three best lifts that Jessica Buettner scored:

When Jessica Buettner took to the squat, she started off her return to competition with a big world record, which was subsequently uploaded to the IPF Instagram page. According to the IPF website, her 210.5kg squat surpassed the world record held by Angelina Elovikova by a solid 7kg.

The excitement did not stop there either, as next up was the bench press. Jessica pressed 105kg. This was not a world record, but it was an important part of her overall performance that led to her getting another world record.

Last but certainly not least, Buettner took to the deadlift, where she has been known to excel over the years. This proved to be the case here, with her 247.5kg pull surpassing the record held by Kimberly Walford previously held by 3kg.

These three lifts led to her getting another world record with her impressive 563kg total. What makes this so insane to see is the fact that she shattered the previous record by a staggering 20.5kg, which was held by Elovikova.

It was such a good thing to see Jessica Buettner back in action, and it is clear that she has not taken her foot off the gas the entirety of the time that she has spent away from the sport. To come back after 19 months away and score three records at the 2021 IPF World Classic Powerlifting Championship, it goes to prove just how talented she is.