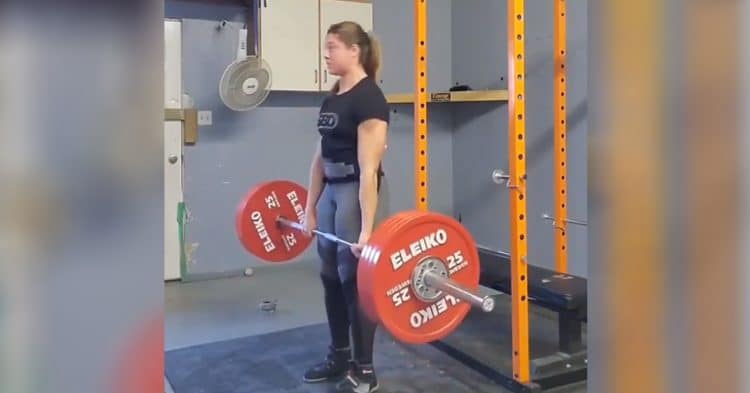 It was an “antisocial kind of morning” for her, she said.

That seemed to work for her.

Watch the champ in action.

Thankful for this insulated garage and @eleikosport setup 😍 not only because of covid restrictions but also because dropping weights isn’t allowed in most gyms in battleford 😅 Plus today was an antisocial kind of morning !!

She’s definitely a winner. And Jessica Buettner is doing it all with her own personal challenges, one of which includes Type I diabetes. She’s even been known to deadlift in her own living room.

Check out an interview with her from earlier this year where she discusses what being an elite powerlifter in a world of quarantine and a life with diabetes is like.

Read more: Jessica Buettner Tells What It Takes To Be An Elite Powerlifter With Type 1 Diabetes (Exclusive)

Earlier this year, Jessica Buettner won the Canadian Nationals CPU in March 2020 with the following stats:

Prior to that she made first place at the Canada Commonwealth championships in September of 2015.

And that’s not all. On the Open Powerlifting Org. page Jessica Buettner’s record speaks for itself. These records above are just two of her 14 first places and two second-place wins for competitions that go back to 2014.

Jessica Buettner has been winning for a long time, and she will likely continue to do so.

Track athletics is another passion of Jessica’s, and one that she wins at as well. Prior to that, she won the Silver for the Canada West Shotput in 2015. The year before, she won the Bronze in the same sport and same competition.

For all of that, she’s ranked as one of the 20 most jacked women in Instagram.

With this week’s most recent post, she’s telling the world that digging deep, even on “antisocial mornings” is what it takes to win.