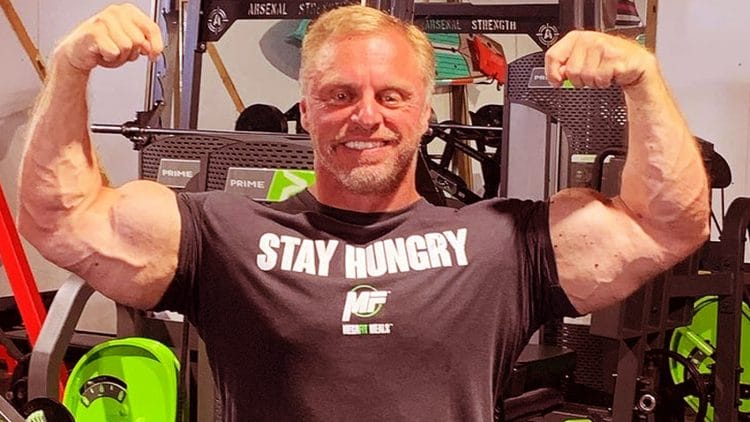 We’re extremely sad to report on the death of bodybuilding and fitness legend John Meadows who reportedly died of a pulmonary embolism in his sleep on Sunday, August 8th, 2021, according to a source.

Meadows, who also went by ‘Mountain Dog,’ was 49 when he passed.

He suffered a heart attack in early 2020 and was able to share his experience on YouTube, of which he explained that there were blood clots in his arteries.

And while things may have seemed to have been alright for a little while, his sudden death came as a shock to the bodybuilding and fitness community.

The following message was posted to Facebook by Brooke Nappo on behalf of Meadows’ wife Mary.

“Dear Friends & Family,
I am posting this on behalf of Mary. This morning John passed away unexpectedly and peacefully in their home.

As you can imagine, this is a complete shock to her and the boys. She will update as soon as she can.

Please know she is very thankful for all the prayers and support she knows her and the boys will receive from you all.
-Brooke Nappo”

Dear Friends & Family,I am posting this on behalf of Mary. This morning John passed away unexpectedly and peacefully in…

Meadows suffered from a rare colon disease in his earlier years which affected his ambitions to compete as a top-level bodybuilder.

It got so bad that his colon burst which almost killed him. After this experience, he knew it was time to call it quits and retired from the sport in 2017.

John Meadows competed in his first show at the very young age of 13. It’s safe to say he was hooked after that experience although he finished dead last to older competitors in the 13-17 age category.

‘Mountain Dog’ went on to win several competitions before his health forced him to hang up his posing trunks.

However, his sheer will and determination to push through obstacles and earn his Pro card were something to be admired.

Bodybuilding taught him a lot and allowed him to train many of the world’s best competitors including 212 Mr. Olympia champion Shaun Clarida.

You can see his contest results below:

The bodybuilding community mourns the passing of John Meadows

Many have paid tribute in honor of John Meadows’s life through social posts. He was well-liked by anyone he crossed paths with and his contributions will be forever impactful.

I’ve found myself fortunate enough to be doing a lot of podcasts/interviews these last couple of weeks in regards to my bodybuilding backstory. One thing my mind continuously brought me back to talk about was my beginning with training techniques/ideals and how John Meadows played a huge role in building that as well as my training philosophies of today. He took @ivanaivusic and myself under his wing and brought us into his home multiple times to be apart of his family. More than being an icon in the fitness industry he was a better MAN, husband, and father and that’s what truly made me look up to him the most.
⠀
I just had a phone call with him last week setting plans for Ivana and I to come stay with him and the family during the Arnold sports festival next month and how he was going to help me build a specific training program for my offseason ahead focusing on bringing up certain areas. But more importantly we were going to watch him coach and his sons play football Saturday morning first! And that’s what he was all about. Still just so hard to believe at this moment.
⠀
My thoughts and prayers go out to John’s family, especially his amazing wife Mary, and two twin sons Jonathan and Alexander. RIP @mountaindog1

We lost a hero. A true “good guy” in his honor from my personal archives : June 2014 I hired @ryanloco to shoot @mountaindog1 for the day and this photo became truly unforgettable to anyone who saw it. RIP @mountaindog1 thank you for the memories

Prayers to the family and friends of John “Mountain Dog” Meadows, who passed away this morning. We loved seeing John at the Arnold Classic every year and on Arnold Classic 212 stage in 2016. RIP, John. You will be missed. @mountaindog1

This has nothing to do with bodybuilding or prep or anything……my heart hurts because John was such an amazing man. He was a close friend, my mentor, an awesome husband and a truly amazing dad to 2 incredible boys. His passion in life was helping others (bodybuilders, football, life) and I can’t even process what life will be without him.

John was an incredible human being and I’ll be forever grateful for everything he did for me. Love you John ❤️❤️❤️ @mountaindog1

John Meadows left behind his wife Mary and their two sons. The Fitness Volt team would like to offer our most sincere condolences to his family and friends. ‘Mountain Dog,’ was a true bodybuilding legend.

Read also: John Meadows: Remembering The Life And Career of The Mountain Dog