Johnnie Harris once again proves why he is considered as one of the greatest pound-for-pound bench pressers in the world. 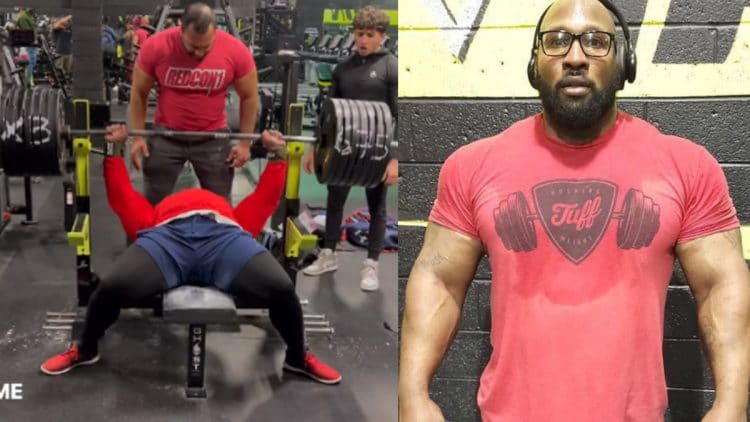 Johnnie Harris is no stranger to bench pressing massive weights and is widely considered one of the strongest bench pressers currently. This is mostly because of his one incredible achievement, as he is The Lightest Person To Raw Bench Press 700 lbs. Johnnie achieved this at the 2020 USPC Virginia is for Lifters, and now, nearly two years later, he is very close to doing multiple reps with almost the same weight. In fact, he is just 15 lbs shy of that, as Johnnie shared a new three rep bench press PR of 675 lbs (306 kg).

Johnnie Harris’ new massive PR is considered raw by powerlifting standards, as he only used wrist wraps to aid him in the lift. Johnnie’s reps were also very comfortable, and he did not seem to struggle at all. He did not specify his bodyweight at the time of this lift, but Johnnie usually competes in the 140 kg weight class.

The video of Johnnie Harris performing three reps with 675 lbs (306 kg) has drawn a lot of attention. Most notably from the All-Time World Record Holder, Julius Maddox, who left a comment under the post. Julius is predicting how much weight Johnnie is able to lift.

If Johnnie Harris actually manages to bench press 730 lbs (331 kg) in a sanctioned powerlifting competition, his lift would be ranked as the All-Time Third-Heaviest, only behind Julius Maddox (782.6 lbs) and Kirill Sarychev (738.5 lbs).

Johnnie Harris At A Glance

Johnnie’s current official (done in competition) raw bench press PR is 705.4 lbs (320 kg). This lift is also an All-Time World Record in the 140 kg weight class, and Johnnie set it at the 2020 USPC Virginia is for Lifters. He does not have a squat or deadlift PR, as he never took part in those events in an official competition.

Johnnie Harris’ last time competing was in 2020, so everyone is waiting for him to step on a powerlifting platform and show his progress. Throughout his career, he has taken part in 5 sanctioned competitions, with his debut coming in 2006.

Johnnie Harris has not announced when his next powerlifting competition will be. However, he seems to have made incredible amounts of progress, and looks ready to step onto a powerlifting platform. After bench pressing 705.4 lbs in a competition, Johnnie set his next goal for 725 lbs. He failed to lift it twice, so maybe his third attempt will be more successful. Judging from his recent session, it looks like Johnnie Harris will be making some pretty significant moves in the near future.